A perfect destination from the inside out

The Greater Columbus Convention Center (GCCC) is owned and developed by the Franklin County Convention Facilities Authority (FCCFA), a quasi-governmental agency charged with a similar role in regard to the Hilton Columbus Downtown and Nationwide Arena. For the past 19 years, the Greater Columbus Convention Center has been managed by SMG. As the industry leader in venue management, SMG offers expertise in sales and marketing, event booking and programming, food and beverage operations, construction and design consulting, and pre-opening services for more than 250 public assembly facilities. These venues include a variety of convention and exhibition centers, arenas, stadiums, theaters, performing arts centers, equestrian facilities and science centers, worldwide.

Over the years, the Greater Columbus Convention Center has routinely expanded and renovated the facility, including an $85 million expansion and garage construction in 2001 and a $40 million renovation of Battelle Hall in 2010 to transform it into Battelle Grand, the largest multipurpose ballroom in Ohio and one of the largest in the Midwest. Its latest effort is a $125 million expansion and renovation project which began in September 2015 and is scheduled to be completed in July 2017.

According to John Page, GCCC’s general manager, the project should be a “game-changer” in Columbus, allowing the Center to increase its business and compete more effectively on a national level for clients. “We’re renovating the entire complex,” he states, “soup to nuts – lights, finishes, ceiling, carpet, wall coverings, restrooms, furniture, signage, technology, sound systems and an enhanced food court. We’re going to expand our footprint from 1.7 million square feet to 1.8 million square feet – 37,000 square feet of new exhibit space; 10,000 square feet of meeting space; and a large, new atrium. Our meeting room count goes from 65 to 74.”

The new project will also include exterior renovation, featuring cleaning and repairing the exterior façade, adding enhancements to guide attendee arrival and navigation with way-finding, replacing all exterior doors, and transforming the passenger pick-up and drop-off points from a service-entrance appearance to more of a welcoming sense of arrival. Upgrades will include decorative lighting and public art, while other attributes will include an overhead canopy, outdoor café, event lawn and additional landscaping. Upon completion, the venue will receive Leadership in Energy & Environmental Design (LEED) certification. In addition, a new $18 million parking garage completed in February 2016 added 800 more spaces to the Center’s existing 3,200. The eight-level Goodale Garage, which replaces a former 192-space lot, features LED lighting throughout and will be connected to the convention center by an enclosed walkway.

Even with an extensive reconstruction project ongoing, Page says that the Center will remain open during the entire 22 months it will take to complete all 19 phases of the task. “We’re taking certain areas offline at various time periods and between the hotel (the Hyatt Regency Columbus, which is also being renovated) and the Convention Center; we’re adjusting groups between those two locations as we have to, so there’s no interruption of business,” he says. “In fact, during this time period, we had close to 560 events on the books and as we worked through this phasing plan, there are 144 events between the Convention Center and the hotel that are going to be impacted – but no one left and no one had to be given new dates.”

According to Jennifer Davis, Greater Columbus Convention Center’s Senior Marketing and Communications Manager, the Hilton Columbus Downtown, which opened October 19, 2012, has given the city an additional 532 hotel rooms, allowing Columbus to bid on 900 more national events than it could have without the increased room capacity. All in all, Page reports that there are 2,000 hotel rooms connected directly or adjacent to the Center and another 2,000 in the downtown footprint of Columbus.

Page says that since 2009, the Greater Columbus Convention Center has increased its net income every year. “We’ve seen it rise every year and it’s continuing to shoot north. Coming out of this project, our anticipation is that it will continue to grow.” Davis remarks that even during the Great Recession, the Center’s significant state association and state government business remained strong. “It was even more important for them to rally their own groups and show the value of their associations and what their services could deliver,” she says. “So even when the economy was a challenge, it was important to them to hold their annual events – not only as a revenue generator – but to reinforce their worth to their members.”

Both Page and Davis are bullish on the Greater Columbus Convention Center, as well the city of Columbus. “Both our city and our facility are very navigable,” Davis says. “We’re 10 minutes from the airport. The Central Ohio Transit Authority’s new AirConnect shuttle to Port Columbus International Airport stops just outside the facility. We’re a very simple city to drive into, and right outside our doors, we have an arts district and an arena district. The 18,000-seat Nationwide Arena is two blocks west of us. So events like the NHL All-Star Weekend (which the city hosted in 2015) found the concentration of our facilities in such close proximity to be of incredible value.”

“We sit here in the 16th largest city in the country,” Page adds. “We’re within one-day’s drive and a one- hour flight from 50 percent of the United States. In 2018, we’re going to be hosting the NCAA Women’s Final Four basketball in Columbus. The games themselves won’t be played at the Convention Center, but the Fan Festival, the coaches’ meetings, and things of that nature will all be here. So, the people coming through the Convention Center will be three, four, or five times more than those who see the games themselves. We’ll have that additional foot traffic.”
Things are looking bright for the soon-to-be, newly renovated Greater Columbus Convention Center. General Manager Page sums it up nicely: “Columbus is open for business.”

Check out this handpicked feature on Brighton Recovery Center.

WHO: The Greater Columbus Convention Center

Markey’s Rental & Staging – Markey’s Rental & Staging is a comprehensive, audiovisual communications company for event rental and staging, in-house support services for convention centers and hotels, on-site corporate services, production services, computer rental, video production, and basic equipment rental. It began operations in 1959, as a 16 mm film rental company established by Mrs. Martelle “Marty” Markey. Since then, Markey’s Rental & Staging’s line of business has evolved into a multi-service staging and audiovisual rental company. Markey’s has branch offices throughout the Midwest and in Central Florida and can provide audiovisual services in any hotel, convention center, or other meeting venue anywhere in the United States. – www.markeys.com 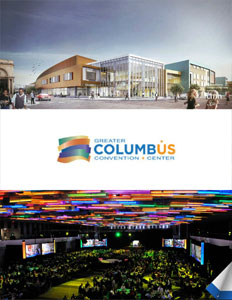