Showcase of the rose city

The Oregon Convention Center (OCC) opened in 1990, on the east side of the Willamette River in Portland, Oregon, sometimes known as the Rose City. At that time, it was considered a midsized center, says its current Deputy Director, Matt Pizzuti. “It had 150,000 square feet of exhibit space, a 25,000 square foot ballroom, and 24 meeting rooms – not a huge facility by any means,” he admits.
Today, the OCC is the largest convention center in the Pacific Northwest, due to a $116 million, 2003 expansion, funded by an increase in the local hotel/motel tax. “It’s over a million square foot facility,” Pizzuti exults. “We have 255,000 square feet of exhibit space; two ballrooms – one 34,200 square feet and the other 25,200 square feet; and we have a total of 50 meeting rooms, two VIP suites, and 150,000 square feet of lobby space. It’s the 45th largest center in the country.”

The OCC’s building and grounds also display a two-million dollar collection of public art, with works from over two dozen, mainly Pacific Northwest, artists. There are paintings, plaques, glass and ceramic tiles, sconces, mosaics, bells, etc. Each of its signature glass, twin towers has a focal point work: a forty-foot long Chinese dragon boat is suspended in the east tower and the Principia, the world’s largest Foucault pendulum, swings and rotates across a 40-foot halo of suspended, gilded rays, in the north tower.

The OCC is owned by Metro, the Portland area’s regional government, is managed through the Metropolitan Exposition Recreation Commission, and is supported by a variety of local funding and support partners. “We get a portion of the room tax, the transient lodging tax, we call it, that comes directly to the Convention Center and then Travel Portland is partially funded from that, as well,” Pizzuti says. Travel Portland is the city’s Convention and Visitors Bureau. Its mission is to market Portland as a preferred destination for meeting, conventions, and leisure travel. “We also have in town a ‘tourism improvement district’ fund that helps convention and tourism activities,” he adds.

Having a convention center act as an economic engine for the Rose City was an idea that Pizzuti attributes to Portland’s colorful, former mayor, Bud Clark, who held office from 1985-92. “It was his leadership that really made the Convention Center happen,” Pizzuti says. “He had been to other cities and seen convention centers being built and knew that Portland, at the time, needed an economic driver. He knew that conventions bring in a lot of folks, they spend their money, and they go home.” The city’s Lloyd district was chosen as the Center’s site, as it was considered in need of economic redevelopment. Today, the OCC generates about $500 million a year of economic impact for the City of Portland and its surrounding communities.

The OCC’s complex covers 18 square blocks. The building, itself, is LEED Platinum certified; one of only two similar convention facilities in the U.S. “That’s a brand differentiator in our business,” says Pizzuti. “It is definitely a feather in our cap. And we’re consistently and constantly upgrading systems. We just added solar panels to our roof this last fall – 6,500 panels that will generate enough electricity to power about 25 percent of our electrical needs, annually.” Pizzuti is quick to add that the new rooftop array cost the OCC absolutely nothing. “It’s funded through a couple of different grants: one from Pacific Power, which is our power provider, and one from the Energy Trust of Oregon, which is a group that works with different entities to get people to use alternative energy – there’s some governmental assistance through them.”

The OCC’s commitment to sustainability will soon extend to other areas, as well, including an upgrade of the lighting fixtures in its ballrooms, loading docks, and garage areas. “Those will go from non-LED to LED lighting, saving a big chunk of energy,” Pizzuti says. “Along with that, we are doing what’s called a ‘waste diversion plan.’ We are actually requiring our clientele to leave the facility as sorted, material wise, as possible. In other words, we are asking them not to bring in material that cannot be recycled, such as foam core signage. That’s a prohibited item. If they bring that in, they have to take it with them when they go.”

Each year, the OCC’s staff of 112 full-timers and extra part-timers, as needed, host around 450 events for between six and seven hundred-thousand attendees. Pizzuti says there is no typical client. “Because we’re an affordable destination, we get a variety – from religious groups, to the high tech market, to medical, to local shows like wrestling, Taekwondo, and cheerleading. And we do some large consumer type events as well like the auto show.”

Pizzuti believes that the OCC’s success at attracting business is largely due to the many in-house services it offers. “We chose the model of doing as many things as we possibly could, in-house. We have our own electricians; we have our own audio/visual team; we have our own internet and telecom team; our own set-up, housekeeping, and cleaning staff; parking management staff; admissions folks; security. You name it – we do it all in-house. So, the advantage for clients is that they get a really high-quality product because our folks are here all the time and know the building really, really well. They know what works and they know how to arrange things so that clients have the easiest time possible in the facility,” he explains. “And it’s cost effective. We’re able to keep costs down because you’re negotiating with one entity.”

One of the OCC’s challenges over the years has been the lack of a nearby hotel that could serve as its convention headquarters. “A lot of groups love Portland and want to come here,” says Pizzuti, “but they look at housing their attendees and there’s nothing right by the Convention Center. That has been a deterrent to business.” That situation finally changed in May 2015, after many years of contentious political and financial wrangling, when the Oregon State legislature authorized Metro to issue $60 million in revenue bonds to help finance a $212 million, 600-room Hyatt Regency directly across the street from the OCC. “If everything goes well,” Pizzuti says, “we’ll be breaking ground on that project in May 2017, with an expected opening date of October 2019. So, we see that as a huge change in our opportunities.”

Now celebrating its 26th year, and with a new hotel on the horizon, the Oregon Convention Center is well-poised to continue its award-winning service to the people of Portland and the many groups and travelers who hold their events in the Rose City.

WHO: The Oregon Convention Center
WHAT: The largest venue of its kind in the Pacific Northwest
WHERE: : Portland, Oregon
WEBSITE: www.oregoncc.org 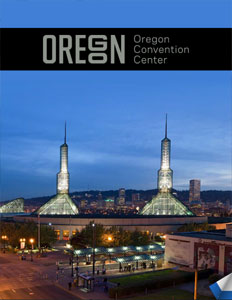