Top Spot in the State

Clarksville, Tennessee is the fifth largest city in the state with a population of approximately 150,000. It was incorporated in 1785, and named after General George Rogers Clark, frontier fighter, Revolutionary War hero, and brother of William Clark of the Lewis and Clark Expedition. It is situated in the northernmost portion of the state, 45 miles northwest of Nashville, at the confluence of the Red and Cumberland Rivers. Clarksville is home to Fort Campbell and the 101st Airborne Division, an elite, modular specialized light infantry division of the United States Army, known as the “Screaming Eagles.”

First settled by Paleo-Indians nearly 11,000 years ago, and later by the Muscogee, Yuchi, Chickasaw, and Cherokee Tribes, the area now known as Tennessee was visited by Spanish explorers in the late 16th century. By the late 18th century, European settlers had firmly established their presence and after the American Revolution, Clarksville was designated as a town to be settled, in part, by soldiers from the disbanded Continental Army in lieu of the wages that the new nation could not afford to pay them.

And since that time, Clarksville has maintained on ongoing interdependence between its citizens and the United States military, never more so than with the establishment of Fort Campbell at the start of the Second World War. “The 101st weighs very heavy on what we do here, in Clarksville,” says Keith Lampkin, the city’s Director of Community and Economic Development. “It has an enormous economic impact on our community. With that said, there’s a lot more to Clarksville than Ft. Campbell. We’re branching out and expanding and looking for ways to bring businesses and more folks into our community.”

One of the city’s current initiatives to achieve that goal is the revitalization of its downtown. Over the course of its history, Clarksville has had to build and rebuild its city core several times. The Great Fire of 1878 destroyed much of its downtown business district, including the courthouse and many other historic buildings. In 1999, the downtown was devastated again, this time by a category F3 tornado, and in 2010, a flood caused expansive damage and many businesses along the Cumberland River were totally lost.

Lampkin says that his office is working to leverage funds from a combination of sources, including federal CDBG (Community Development Block Grant) monies, and loans from a Community Development Financial Institution (CFDI). (CDFIs are private financial institutions that are 100 percent dedicated to delivering responsible, affordable lending to help low-income, low-wealth, and other disadvantaged people and communities join the economic mainstream.) “We’ve found a CDFI, and it’s working up a proposal for us,” he says. “Then the city will put up some money and we’ll have a revolving loan fund of, hopefully, a couple of million dollars. We’ll be able to use that for some small businesses and some revitalization. Downtown is already a very attractive place. It’s a nice place to walk around; there’s great landscaping and old buildings. We want to build on what we already have.”

While redevelopment funding is being sought, other events are already re-shaping the city’s footprint. “Austin Peay State University, which has got 10,000 students, just recently bought seven million dollars of property, downtown,” Lampkin reports. “It was a car dealership right across the street from the campus. So, that’s going to expand the campus and that’s going to change the way downtown is going to look. Also, Hankook Tires is building a plant on the outskirts of the city that’s going to employ at least 2,000 people, and that’s also going to change the way we look and the way that we do things because those will be good-paying jobs.”

In addition to downtown development, Lampkin’s office, which formerly was known as the Department of Housing and Community Development, still has the responsibility of creating and carrying out a housing strategy for the city’s low and moderate income citizens. He relates how a few years ago, the Department purchased an old trailer park in “a bad part of town. We bought it, cleaned it up, and turned it into a 23-lot subdivision,” he says. “We recently turned 17 of those lots over to a non-profit that’s going to start building single-family houses there – mostly for veterans. It’s a planned-unit development with green space, underground utilities, decorative lighting. We’re really excited about that because it turned a neighborhood around.”

Over the last couple of years, with the help of the state and some private developers, the city has also built some 400 housing units – and it’s planning for more housing starts. “We’re looking at new, market tax credits and several revenue streams to get things going,” Lampkin remarks. “It’s got to be a public/private partnership. We know that. And we’re looking for the private side to join us in our endeavors and help us grow. We’re looking at CRAs (Community Reinvestment Act) and CDFIs, and all avenues where we can bring some income here. We are also looking at the housing tax credits for mixed-income housing in the downtown area. We’ve got a lot of irons in the fire, but we know we need private financing to get any of these things done; we’re not going to be able to do it all on our own.”

While Clarksville reshapes itself, once again, Lampkin stresses that the city already has many amenities that help make it one of the country’s fastest growing metropolitan areas, and a popular place for current and former members of the military to want to live. “We are growing by leaps and bounds,” he exults. “About 300 soldiers a month get out of the service at Ft. Campbell and a good portion of them stay here in the area. So, we’re growing at a pretty significant rate.”

In addition to its good schools, a strong economy, and many cultural offerings, Clarksville also offers both its incoming and current citizens an array of diverse recreational activities, including more than two dozen city parks and trails. “We’ve got a great greenway,” Lampkin boasts. “We took over an old rail bed that starts from the Red River and soon will go all the way up to Ft. Campbell. It’s paved, so you can ride a bike, or roller skate, or walk. It’s very scenic. It’s a tremendous asset and it stays packed all the time; a lot of people use it and when it’s all finished it will go from one side of town to the other.” The City’s Liberty Park has sports fields and a brand new marina. “We’re also working on a connection from the marina to McGregor Park, and another connection to the confluence of the Red River and Cumberland River. We got some grant money to do some of this,” Lampkin adds.

“Clarksville is coming into its own,” Lampkin proudly states. “We’re the ‘Top Spot in the State.’ That’s our logo. It’s a great place to live; we’ve got a great quality of life. People like living here. It’s a great location; it’s a friendly place. And it’s very diverse. With the military here, we see people from all over the world. Your neighbor can be from anywhere in the world; anywhere a G.I goes. And we enjoy having folks living here from around the country and around the world.”

And, of course, Clarksville and the U.S. military will always have that long-lasting, special relationship that began many years ago, when the nation was young. “We pride ourselves in supporting our military,” Lampkin says. “We support those guys a hundred percent and we support their families. They’re deployed all over the world. And we make sure when they’re gone, their kids have quality schools, they’ve got good parks, and things to do. We take that seriously.”

WHERE: : Approximately 45 miles northwest of Nashville, and just south of Kentucky 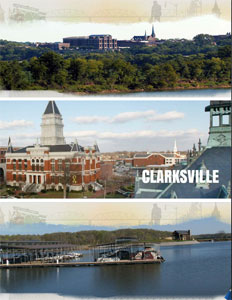