Located in the heart of downtown Providence, and managed by SMG, the worldwide entertainment and convention venue management company, the Rhode Island Convention Center (RICC) is a multi-purpose facility that houses conventions, trade and consumer shows, exhibits, receptions, banquets, meetings, concerts, and sporting events. According to it Executive Director, James P. McCarvill, the RICC was founded by the state’s Convention Center Authority on a site next to the 12,000-seat Providence Civic Center, now known as the Dunkin’ Donuts Center, or more affectionately, “The Dunk.”

When first conceived, the Authority’s master plan included a large parking facility that would support a new Center and a hotel that would serve as a headquarter hotel for the new facility. “But the market at the time wasn’t great for hotel development and since the destination really didn’t have a whole lot of convention and trade show history, it was hard to get a developer to come in and do a hotel,” McCarvill explains. “So the Convention Center Authority decided to develop our own hotel.

“In December 1992, the first piece, which was the north garage with 1,800 spaces, went into service, and the following year, the Convention Center came online with 100,000 square feet of exhibit space, and about another 40,000 square feet of meeting and pre-function space,” McCarvill continues. “And then, the year after that, a 365-room Westin Hotel opened, owned and operated by the Convention Center Authority. The goal was to start from a very small base because the Civic Center was a place for hockey and basketball, the circus, and concerts. The plan was to make it into a legitimate destination for conventions and trade shows that could fit in that configured space. So, things stayed in that configuration – just the Convention Center, the garage, and the hotel until 2005.

McCarvill says that, as a “child of the Legislature,” the Convention Center Authority, which was formed in 1987, had the ability to sell the bonds that funded the entire project. “The annual debt service on all those bonds is secured through a lease with the State of Rhode Island,” he says. “The debt service is funded by the annual appropriation and any shortfall would also be coming from an annual appropriation. The capital money that’s needed for the facility comes from the Rhode Island Capital Asset Protection, which is a mandate within the state that says that a portion of the state’s budget has to go for the maintenance and renewal of state-owned properties.”

Over the course of a year, approximately 1,000 people work within the complex. “The core staff is south of a hundred, and that includes the garage, the Convention Center, and the Dunk,” McCarvill says. “Food service workers are going to come when you have food; the laborers, electricians, and people who set up shows are going to come when shows are here.”
The types of shows the Rhode Island Convention Center has showcased recently include cheerleading and dance competitions. “We’ve really been successful with that niche market,” McCarvill says. “But we also do scientific and medical; we do warehouse conferences; any state associations that are not associated with another state. As long as it fits – we go after it. Between the two facilities, we do a little over 300 events a year.”

Regarding the Rhode Island Convention Center’s competition for business, McCarvill states that it mainly comes from other cities of a similar size, such as Pittsburgh, Columbus, and Baltimore. But he doesn’t consider it a problem, should a meeting planner choose to hold an event at a local hotel. “Our relationship with the hotel community that provides us rooms for our events is really good. So, we wouldn’t look at a banquet that went from our building to the Marriott or the Crowne Plaza or one of the other properties as a loss as long as it stays in the state.”

In its present configuration, McCarvill admits that there is precious little room for the Rhode Island Convention Center to expand. “We’re landlocked,” he says, “so all we can do at the present time is on our footprint. We do have a few things we can do; we can probably add about another 22,000 square feet of meeting space or maybe another ballroom, which our planners would like. It helps the planners to have a little more flexibility. But if we needed to do something major – adding 50, 60, or 100 thousand square feet, we’d have a hard time doing it because there’s just no place to go.”

Meanwhile, upgrading the Rhode Island Convention Center’s technology is McCarvill’s present focus. “We’re going to be addressing Wi-Fi and as much capability as we can possibly put into these facilities because it’s an integral part of the whole experience. You need to make sure that you’re covering all of your bases with the new technologies, so we’re definitely upgrading in that area. And a lot of what we’re doing is in the area of energy efficiency. We’re doing things like fixtures and bulbs; we’re also doing things like drive motors – things that run your HVAC system; things that run your pumps.
There are significant savings to be had there. And it’s not just the savings – people are interested in how you handle your refuse. We had a group last summer that was particularly concerned with what we used to serve our food. They were put off by Styrofoam cups – they needed to see a paper cup made from recycled materials; that was important to them. And we’re ready to do that; we’re absolutely ready to accommodate the wishes of people; sustainable practices – that’s what we’re trying to do. We fully expect in the next twelve months to be purchasing some clean power. Again, it’s probably a good idea from a financial standpoint, but it’s also a good selling point with the customer base.”

In addition to making sure that the facilities remain in excellent condition, McCarvill says that another priority is making sure that the RICC is targeting the right potential customers with the right message. Integral to achieving that objective is the Center’s partnerships with its sister organizations. “Our business partners, the Convention Visitors Bureau, the hotel community, the Hospitality Association, all really work well together and I want to see that continue because they count on our set of facilities to help them succeed in their businesses. So we do the very best job we can to support them, delivering a really efficient product to support the rest of the industry in the city and the state.”

And the message that McCarvill wishes to communicate is simply stated: “I think it’s one of the better laid-out programs. You’ve got the ability to come here by plane, by train, or by car. We’ve got the Arena, we’ve got the Convention Center, we’ve got the headquarter hotel. We’ve got another two hotels which are under a block from the building. The facility is a beautiful facility – it’s one of those places that absolutely over-performs. Whatever it is that you thought you were going to get – you’ll get better. The whole package works really well. We’re part of a really good destination sell.”

WHO: The Rhode Island Convention Center 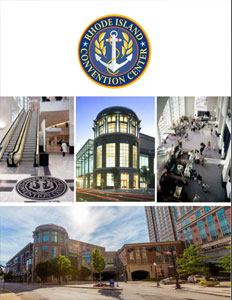