A passionate advocate works to close the deal on plastics

There is a seminal scene in The Graduate, Dustin Hoffman’s 1967 breakout movie about an aimless young man named Benjamin who is contemplating his uncertain future during an uncertain time in his life. At a college graduation party thrown for him by his parents, Benjamin is confronted by a helpful friend of the family who wants to give him some very sage advice. The dialogue goes as follows:

Of course, in the movie, “plastics” is the last thing that Benjamin does wind up thinking about. But in the real world, Mr. McGuire’s prescient counsel to his young protégé actually turns out to be entirely and substantially correct – there is a great future in plastics.

At least that is an opinion enthusiastically shared by Tony Radoszewski, the President of the Plastics Pipe Institute (PPI), the Dallas, Texas-based organization that is the major trade association representing all segments of the plastic piping industry. And as one of plastic piping’s most eloquent advocates, his role, and the role of the association he presides over, according to the PPI website, is to increase “awareness and create opportunities that expand market share and extend the use of plastics pipe in all its many applications.” 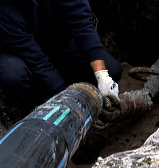 Plastic piping is a newer, advanced material being used in the largely unseen world of underground water transport. For most of humanity’s time on the planet, wood, clay, lead, and later on, cement, ductile iron, and copper – the so-called “legacy materials” – have held sway, and were the preferred resources used by plumbers, contractors, builders and municipalities for their potable water, sewer, and waste water operations.
It was in the early 1950s that PVC (polyvinyl chloride) piping appeared on the scene, followed by PE (polyethylene) in the late 1950s and, today, several more varieties of plastics have arrived with differing chemical make-ups and characteristics – PP (polypropylene), CPVC (post chlorinated polyvinyl chloride), cross-linked polyethylene, commonly abbreviated as PEX, and polyamides (nylons) among others.

So, according to Radoszewski, even though plastic piping is lighter, less expensive, is corrosion resistant, requires less labor for its installation, and lasts considerably longer than the legacy materials, it has been difficult to wean pipe’s end-users off of the substances they are historically familiar working with. That is why PPI’s main objectives are to educate design engineers, builders, contractors, and municipalities about plastic piping’s advantages and to try and get the necessary changes in federal, state and city specifications along with local building codes that will allow plastic to compete more fairly with the older, traditional materials.

All plastic piping wants is “fair competition,” opines Radoszewski, so “it is necessary to draw attention to the fact that a better, longer-term performing product is being excluded from the bid sheets.” That is why it is so important that PPI work to get municipalities to amend their specifications and building codes. And if “we can’t get municipalities to look at different products, maybe we have to do it legislatively. We are working to draft legislation that says if any material meets the engineering requirements for a specific application, it needs to be added onto the bid sheet. Of course, a lot of these jobs are offered to the lowest bid, by design, and more often than not plastic pipe is going to be less expensive than concrete, ductile iron, and copper pipe.”

Interestingly, it was neither product awareness, nor

legislation, that not too long ago activated a seismic shift in the plumbing sector, but rather unforeseen market forces that did the trick. For years, copper was the number one product used for plumbing. Radoszewski continues, “We tell the plumbing industry that we have a better product, but we meet resistance from numerous entrenched sectors. . .but when copper prices started going up and being stolen from job sites, the builders became very open to considering an alternative material. In two years, or so, our product went from single digits to over 50 percent of market share.”
Even though PPI and Radoszewski’s nine person team work tirelessly with the institute’s 140 member companies to effectuate change, the going is arduous; but he sees the possibility of a significant transformation of the piping landscape in the not too distant future: “The one that really strikes home to most people, and is unknown to most people, is the shabby shape of the underground infrastructure in this country – predominantly water, sewer, and storm water systems. And the reason is ‘out of sight out of mind.’ People don’t think a lot about water pipes or sewer pipes until something goes wrong. And the EPA (Environmental Protection Agency) estimates that it would take hundreds of billions of dollars to fix.

“In my opinion, underground water systems are the third rail of mayoral politics. No one wants to touch it because it’s expensive and ratepayers don’t think it’s necessary because they don’t see the problems when the plumbing works. The only way it’s going to be fixed is increased water rates, but no one wants to pay for it; they’re accustomed to cheap water. On the gas utility side, when the federal government mandates that you have to replace lines, the gas utilities are left with no other option but to ask for rate increases to pay for the pipe lines. And the reason why? When gas lines leak, people have a tendency to die. And that’s not the case with water. There might be some sinkholes and some disruption in service, but nobody dies from it. So nobody puts serious interest into it. What we’re trying to do is to make people aware that this situation exists so they’re not shocked by it when it happens.

“Our challenge is fighting inertia. People have to recognize that advances in technology, especially in polymer chemistry, have brought us superior materials compared to what was there before. In every application where pipe is used, there is a plastic material that will most likely outperform what was there before.”

As a passionate advocate for the plastic pipe industry himself, Radoszewski is careful to point out that the PPI is still a member-centric organization. “Our association is run by our members. Think of our team as stewards. Our job is to look out for the best interests of all of our members in the various divisions that they serve, and help them to position their products in the best possible light. We create the awareness that their products exist, with the next step to get the approvals done. We then support our members under the PPI banner to get those approvals through the various code bodies and standard bodies, and then focus on the promotion of that product, from an industry standpoint, to gain greater acceptance. Then it’s up to our members, at the local level, to compete with each other on service, on quality, on personal relationships – whatever it takes to close the deal.”

WHO: The Plastic Pipes Institute
WHAT: Texas-based organization that is the major trade association representing all segments of the plastic piping industry
WHERE: Throughout North America
WEBSITE: www.plasticpipe.org