Langford is a picturesque city on southern Vancouver Island in British Columbia, Canada. It is one of 13 component municipalities of Greater Victoria and lies within the Capital Regional District. Stewart Young has been Mayor of Langford for 25 years. His family has lived in the town for six generations. To say he has a passion for the community would be a huge understatement – he lives, breathes, and dreams Langford, and no one is immune to his excitement for the place he calls “home.” 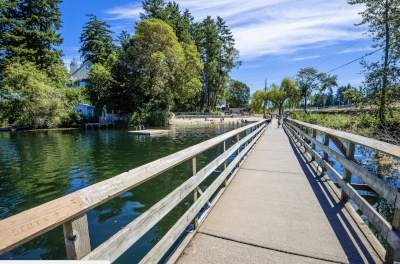 In 1992, when Young started his political career, Langford had an unemployment rate of 20 percent. The lumber mills were long gone, and high-paying industrial jobs went with them. It was a small town where you grew up and then left for university or the chance to advance your career. In this little city of 14,000, opportunities were few and far between.

“That’s why I got into politics,” says Young. “To keep some jobs here. To change the attitude that business people and developers were bad. They were building our houses and creating employment, so our Council started a partnership with the business community and the developer community and started to engage them more, asking, ‘How can we build more housing, bring more jobs, get more people involved in the trades?’ We started an open door policy for business in Langford – that was the key.”

So, the push was made for economic opportunities, jobs, and education. Infrastructure was sadly in need of improvement. Prior to 1992, there were no sewers, and the downtown only had one brick sidewalk, so a full makeover was required. “Most of the Council has been with me in office for 25 years,” Young declares. “That’s an amazing statistic to have! It’s because we were all fighting for the same thing – to create economic activity and some excitement in our town – to promote a positive message that the community can be proud of, for the general prosperity of everyone.”

In the last twenty-five years, Langford has seen good growth and plenty of housing construction; 60 percent of local jobs are in the trades. Hard-working families live in the community, building future homes for people working in other trades. The city now has a population of 40,000, thanks to its well-deserved status as a world-class sports tourism destination. Young recalls, “We had to find out what we could do to contribute to the economy. So, about 20 years ago, Council decided to make recreation a destination here in Langford and build recreational facilities to a higher standard than average community-owned properties.”

The city is always taking on projects – fields for soccer, baseball, rugby, football, even a bowling alley – whatever the community asks for. Every year or two, they build a top-notch arena or stadium. Langford went after sports in a big way and ended up with national training centers for Rugby Canada, Golf Canada, Tennis Canada, and Cycling Canada. The great year-round climate helps considerably, given that Langford hosts international athletes from all over the world, training for the Olympics and other competitions. “They’re all here buzzing around our town, it creates a lot of excitement,” says Young. “The mix of sports and international events has made it a vibrant hub for families and young athletes. We’ve always got something going on.”

Recreational tourism is now the major industry, boosting the economy with restaurants, retail, a beautiful Westin Hotel, and Sheraton Four Points – firsts for this emerging community. Thousands of people come for tournaments and stay and shop. The biking community is also gaining momentum – Langford was recently the site of Mountain Bike Championships and has a huge involvement in Mountain Cross and BMX, as well. The city is spreading the word that it’s open for business, and partnerships are welcome.

Technology companies are showing interest, as are manufacturers. Rezoning is done within three months and building permits issued in 48 hours. “Our staff are part of the program,” says Young. “We want to make sure customers (our residents, business people, and investors) get treated with respect, and know that we appreciate their investment in our community. In Langford, 75 percent of people own their own homes. In Victoria and Vancouver, it’s 30 percent. We used to have high taxes, now we have the second lowest taxes in B.C. – average tax on a house here is $1,035. After our second year in office, Council reduced taxes by 10 percent. That set the tone that we were going to run the city like a business, and make sure we chased opportunities to bring in as many businesses as possible to offset our taxes.”

Six years ago, Langford won the National Golden Scissors Award for reducing red tape. It’s been hard work for the community, but they have been very supportive in working together with City Council. When people find better, faster, more efficient ways to do things, they let Council know and those changes are usually implemented. At present, there is no post-secondary education available in the city, but Council is working with the B.C. government on a plan. The Province has allocated $250,000 for a study with the local Royal Roads University focused on locating a campus in downtown Langford. That will help solve the problem of students having to make long commutes to other post-secondary institutions, and higher rent costs in other communities. Young acknowledges, “When the facility is part of a community, more kids will take part. We’ve done well on jobs, well on recreation, now our number one priority for Council is education. The provincial government holds the purse strings for a lot of educational funding, so that’s a key partnership and we’re hoping we have a good case.”

Downtown Langford today is unrecognizable from the untended version of the early ‘90s. Now, it is attractively adorned with streetlights and sidewalks with brick-walks on both sides. Goldstream Avenue is the scene of a bustling core area. Veterans’ Memorial Parkway – a new 4-lane highway – was built on one side of town, and the $47 million Leigh Road interchange is opening on the other side.

Langford has a non-traditional take on the greening of its community. Rather than plant boulevard trees that are naked six months of the year, the city plants trees that are green year-round. No more clearing the storm drains of leaves. They have palm trees thriving along the main street. Rhododendrons add color twice a year. Boulevards are sodded with artificial turf instead of grass, to eliminate watering and mowing. It’s all about managing costs while conserving water and money. These eco-friendly initiatives reduce water consumption, cut out pesticides, and save on time and wages for leaf cleanup.

Young proclaims, “We buy land to grow our parks. We won a national award for our trails and the international award for Best Arena. And this is really cool: Art (Sutherland), from Accent Refrigeration, is the number one guy in the world for doing ice in the big arenas, ever since the Olympics at Lake Placid. He travels to every country making ice and he’s based in Langford. He put his office in our arena, so the City doesn’t have to pay for the maintenance and upkeep of the venue. Art brings people from around the globe here and uses our facility to show them how to run an efficient, ‘green’ arena. In our case, the heat produced from the ice-making process goes into a pipe underground, and then into the Westhills neighborhood where it heats the homes. We have this underground geothermal system attached to our arena and we get credit for it.

“We prefer to do what’s good for the environment through realistic goals, where we can actually see the results. We are a small community with common sense, doing things that we all understand. We’ve been doing it that way for 25 years, involving the community, taking action, and moving forward – and it works!”

Check out this handpicked feature on The Dynamax Corporation – Different by design. 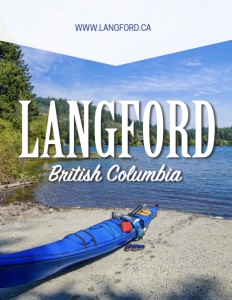