Our heritage, your future

Located in the heart of southwestern Ontario, the Town of Ingersoll offers a unique blend of business opportunities and fun, family-focused living in scenic Oxford County. What began as a small farming community on the banks of the historic Thames River is now a welcoming, vibrant town of over 13,000 people, rich in heritage and culture. Dubbed as Festival Town Ontario, Ingersoll hosts a variety of seasonal events, including the Canterbury Folk Festival, Harvest Festival, Santa’s Festival Village, and the Festival of Lights.

The Ingersoll area was first settled in the 1790s by families from New England, became famous for home-made cheese production before the War of 1812, and was home to the first cheese factories in Canada. Fast forward to the 21st century – heavy manufacturing is Ingersoll’s largest industry, most notably CAMI Automotive. Situated within easy driving distance to London and Woodstock, Ingersoll is close to city amenities, but tucked away from the hustle and bustle. Best of all, Ingersoll has space to grow; where you can buy a new home in desirable surroundings and get more space, more style, and more property for your dollar.

Recently, Business View Magazine spoke with Ingersoll Mayor Ted Comiskey and Deputy Mayor Fred Freeman about their thriving community and the reasons it is poised for significant growth in the near-term future. The following is an edited transcript of that conversation. 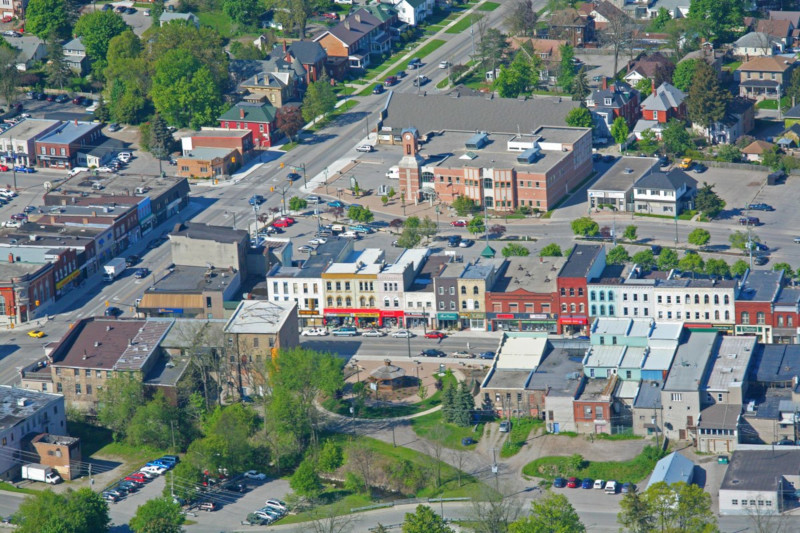 BVM: Can you give us an overview of current development in the town?

Comiskey: “With respect to ongoing projects, we have an arena recreational center project that we’ve been planning for the last 10 years. The architectural drawings and layout are now underway and, hopefully, it will be able to move forward through federal and provincial infrastructure dollars. Number two on the agenda is infrastructure. That development started about eight years ago when Council said we needed to put infrastructure dollars away in reserves for our water, sewers, storm drains, etc.; going through the town and upgrading the infrastructure to make the water much more palatable, and to make our new developments on the outskirts of town, serviceable.

“That project has been underway through the summers, to the annoyance, I’m sure, of all the population because of detours, but we’ve done a fantastic job and the town is in phenomenal shape as far as infrastructure goes. And it’s not only roads, but also buildings and structures. We’ve addressed town hall, the fire hall, our indoor swimming pool area, recreational areas; in my opinion, Ingersoll’s recreational services are second to none for a town our size. So, all in all, society-wise, we’ve been very blessed.”

Freeman: “The population of Ingersoll is around 13,000. We are actually in an unenviable position now, in that we have very few lots available to builders for future development. We do have some development that is good for about four more years, but that’s it. So, we’ve been negotiating with our neighbors to the south – the Township of Southwest Oxford – to bring approximately 1,000 acres into Ingersoll. That should happen over the next few months, bringing in industrial, commercial, and residential lands. We’re very excited to have about 630 of those acres open for industrial, right on the south side of Hwy 401.”

Comiskey: “The development of Ingersoll goes back 25 years or so, when CAMI Automotive came to town. Today, they are our largest employer and the only General Motors assembly plant left in Canada. They build the Chevrolet Equinox here. There are 3,000 workers there, but beyond that, all the plants that supply parts and services for CAMI have started moving to Ingersoll. That brings residential needs; over the last four to five years our subdivisions have grown quickly and it looks like it’s not going to stop for a while. The available industrial land we have has dwindled dramatically over the last year to the point where we could be shy of land if we don’t move quickly on a boundary adjustment – which will likely go through. I can see within the new two to three years, infrastructure being put in place for development of the land, which is perfect timing for what we want.

“With the migration of residential people from Toronto to Kitchener to Woodstock to Ingersoll, moving through to London, that whole corridor is growing. Also, the recognition that we have such great available opportunities in the Ingersoll area, because we are very close to the 402 and the 403, we’re right on the 401, we’re an hour and a half from Detroit, the same from Toronto – we are a wonderfully good place to be, logistically. Development is going to come very quickly on the 401 corridor in this area, and we’ll be there for it.

“We’re very strong in the automotive industry as far as suppliers go, and the production at CAMI, itself, but we also have other companies starting up and doing very well. For example, Ontario Refrigeration and All Treat Commodities (a major soybean elevator/processing facility) that are going to have a huge effect down the road, agricultural-wise. Our Economic Development Director, Curtis Tighe, is concentrating on that kind of diversification, so we can round out our industries.

“Curtis and I travelled to Japan and Taiwan in November, which we do every two years, along with a group called SOMA (Southern Ontario Marketing Alliance). The goal is to look for diversification of products to bring into Oxford Country. Bringing those ideas and manufacturing back here would highlight Ingersoll in that aspect and make it very attractive. We have industries in town and in the area with parent companies in Japan, so the awareness of our region is well known there, and we want to build on that so we have further industrial movement in this direction.”

BVM: Is your downtown area open for mixed-use development?

Comiskey: “We’re working on that now with our Economic Development team – façade improvements, also encouraging residential above the stores; keeping as much housing downtown as possible because that influences action and movement. We have a very good downtown core. Despite being challenged by the closeness of London and Woodstock, I’m very impressed with the variety of stores we have, and the vitality and interest there. We’re also looking at more development along the river area. I think, down the road, you’ll see a downtown that’s not just commercial, but residential will be a very important part of it.”

Freeman: “We started a Community Improvement Plan a year ago and, because of it, our downtown is vibrant and has very few vacant stores, if any. We would love to have more residential downtown. Like much of small-town Ontario, a lot of the shops have apartments above them but, over the past decades, people have moved out. Now we’re seeing an influx, where people are actually buying the building, opening a business, renovating the upper floors, and living there. The Upper Thames River Conservation Authority limits our ability to spread out in some parts of our downtown, as far as apartment buildings, etc. because the Thames River flows right through the core. But we do have some already.” 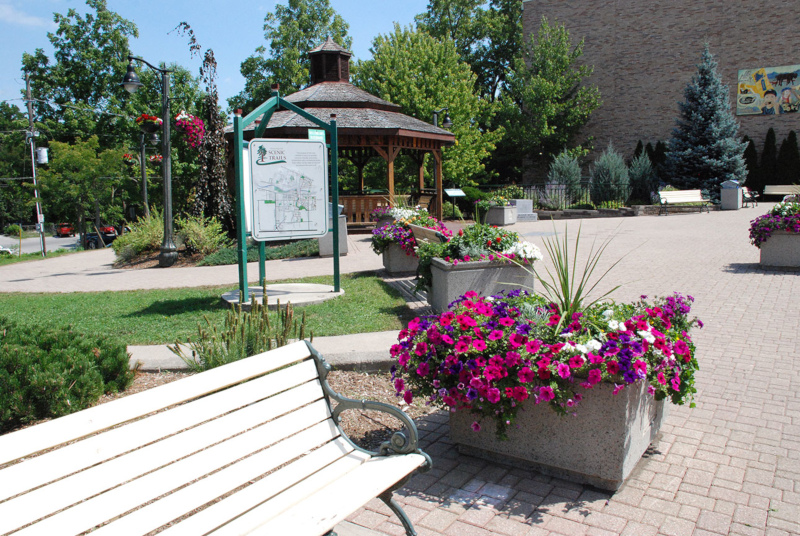 BVM: What makes Ingersoll a special place to call home?

Comiskey: “A few years ago, the town purchased 12 acres of bush for the exclusive idea of putting trails through it, and that development is underway. Every year, we add to our trails system and it pretty well circles the community, now. We’re trying to link all our paths together, so you can go from one spot to another downtown by walking and biking; sharing the road using bike paths. We’re trying to do that throughout the town to make it much more attractive and safer for families. The whole idea is to get people away from cars. If you want to walk or bike to the downtown, we’ll have some routes to get you there, and save on the gas.

“Looking at the big picture, Ingersoll has made great strides over the last eight to ten years and we’re very happy and proud of it. The relationships we have with the other municipalities in Oxford County are a phenomenal asset. I’m just finishing my third term (nine years) as Mayor, and we have a very good Council and a very good administration. I’m just a single vote in a community that is strongly driven to create the best place to live in Ontario. It’s just a beautiful part of the country, things are going well for us, and we’d love to welcome people to visit – and stay.”

In 1866, through collaboration among the town’s businessmen, a giant wheel of cheese weighing 7,300 pounds was produced at the James Harris Cheese Factory, just south of Ingersoll, to promote the area’s cheese industry. The “Mammoth Cheese” was exhibited at the New York State Fair in Saratoga, NY, and then in England. It was a Eureka! accomplishment applauded by the whole country, and in 1867 the Canadian Dairymen’s Association was established in Ingersoll, attended by nearly 200 dairymen from across Canada, followed by annual conventions long thereafter. A booming cheese export industry in the millions of pounds grew from Ingersoll to many parts of the world, and today the Ingersoll Cheese and Agricultural Museum is a world-famous tourist draw.

Where: Oxford County in southwestern Ontario

D.A Sparkes Accounting Professional Corporation is a full-service Accounting Firm with small town roots. We are committed to building strong working partnerships with our clients by providing Accounting, Bookkeeping & Taxation Support to meet the unique needs and attain business and personal financial goals.