Business View Magazine interviews representatives of the Village of Hoffman Estates, Illinois for our focus on Economic Development & Growth in American Cities.

The Village of Hoffman Estates, Illinois is a much sought-after northwest suburb of Chicago, located primarily in Cook County. In the early 1950s, the area where Hoffman Estates now sits was a rural farming community, with Elgin as the area’s major economic center. 1954 proved to be a pivotal year, when a local farmer sold his 160-acre farm to Sam and Jack Hoffman, owners of the Father and Son Construction Company, who had plans to establish a subdivision in Cook County. This land, now known as Parcel A, was located east of Roselle Road between Golf and Higgins Roads. The first homeowners began to move into the new subdivision in late 1955, purchasing homes on half-acre lots for $14,500. On September 19, 1959, residents voted to incorporate as the Village of Hoffman Estates. The new Village had a population of about 8,000, and the incorporated area was just under three square miles.

Fast forward to 2020. Today, James H. Norris, Village Manager of Hoffman Estates, reports, “We’re a community of approximately 53,000 diverse residents, looking forward to the 2020 census. We’re a northwest suburban Chicago community that’s about 22 square miles in size. We have around 5,000 acres of Cook County forest preserves in our community, which means that a significant amount of those 22 square miles is green space that will never be developed for anything other than recreation and open space. The result is a great quality of life for residents of Hoffman Estates, as well as a number of distinct business nodes that offer broad choices for companies looking to locate in the northwest suburbs.” 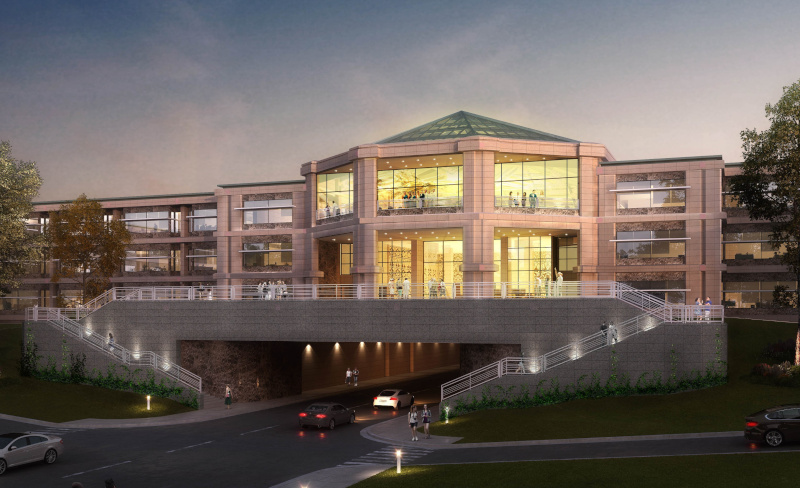 While the transformation of Bell Works will take around 7 years to complete, this rendering of the front door of the Metroburb will be ready sooner as construction is now underway on the office, retail and specialty features, like the Solarium event space pictured on the top floor.

Hoffman Estates started as a bedroom community, but that changed in the late 1980s and early ‘90s, when Sears relocated their headquarters from the Sears Tower in downtown Chicago to a new 800-acre business park in the Hoffman Estates. The area, now called Prairie Stone, included 200 acres dedicated to Sears Holdings. Within a year, Ameritech also located its new headquarters in the Village. In total, nearly 14,000 corporate office jobs were created in the community in this short period.

“We’re a typical, post-WWII suburban community,” says Norris, “but we’re far enough out from Chicago to still have a lot of greenfield development going on. At the same time, parts of the community that date back to the 1950s and early ‘60s are undergoing a renaissance. I’ve been Village Manager since 1998, and when I started, there weren’t a lot of businesses in the Prairie Stone Business Park. The Village Board and staff put an emphasis on diversifying that park from its beginnings as a first-class office business park, to more of a commercial, mixed-use development. We started actively recruiting retail and hospitality, adding Cabelas and a full-service Marriott hotel. In the early 2000s, we partnered with Sears and a private developer on the Sears Center Arena – a full-service sports and entertainment venue that can seat up to 12,000. We’ve since added hotels, restaurants, and a 400,000-sq. ft. regional shopping center adjacent to that property. We have significant opportunities for growth and advancement in both the commercial and residential sectors.”

Kevin Kramer, Director of Economic Development, adds, “Many areas of the Prairie Stone Business Park are shovel ready; the utilities, the curb cuts, the wetlands, and stormwater infrastructure are already in place. We still have about 1,000 acres of greenfield to be developed, and we’re only 20 minutes from O’Hare Airport. No other community in this area can say that.”

It’s an exciting time for development in Hoffman Estates. While Ameritech/AT&T vacated their corporate campus in the wake of the Great Recession, in 2019, Somerset Development purchased the 150-acre property, located just north of the I-90 Jane Addams Memorial Tollway. Somerset is redeveloping the 1.6 million square feet of office space, distributed between three buildings built in the early 1990s, and the surrounding property into what it calls Bell Works Chicagoland, a mixed-use “Metroburb.” A Metroburb provides a slice of urbanity in a great suburban location. Bell Works will feature office and co-working space, as well as retail and service businesses open to the general public within the main building. The Metroburb will feature amenities such as a conference center, special event and public gathering spaces, and a full fitness experience. Plans for the development also include townhouses, apartments and a hotel, matching residents with the businesses and services they need. Somerset is a proven developer, having already successfully transformed the two million square foot Bell Labs facility in Holmdel, New Jersey into the original Bell Works Metroburb. 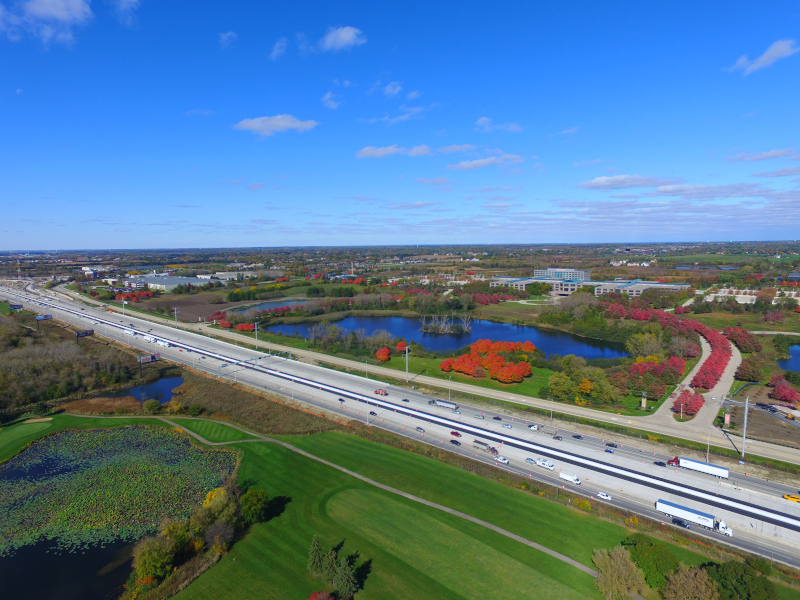 I-90 bisects Hoffman Estates which provides a great opportunity for the office and manufacturing sector to thrive with companies like Claire’s Accessories, Siemens, TRUMPF, and DMG Mori located within the Huntington90 park to have access to a great workforce and excellent transportation network. Additional land is available within the area for development.

Kramer sings the praises of the project: “When that site was home to one company, you needed a meeting or a badge to get in. Now, once it opens, we can say, ‘Hey, let’s meet at Bell Works for coffee,’ just to be part of that because it’s a unique, inclusive place to hang out. With this amazing site, instead of one tenant, you’re putting together 60 different office and retail and service tenants. At the Bell Works complex in New Jersey, they even have a branch of the library and a Montessori school. It’s a draw for the whole community. There is so much more to a Metroburb than a traditional office environment. On top of that, surrounding our Bell Works property will be up to 550 residential units. So you can literally live, work, play, relax, and create on the same site.”

On the transportation front, Kramer notes, “Hoffman Estates has great access. We’re 20 minutes west of O’Hare International Airport and a 45 to 60 minute drive from downtown Chicago. We also have a new interchange at Barrington Road along I-90 with a Pace-operated bus rapid transit station. A bus is available every 10 minutes, so you can get on at our Park & Ride stop, go to a station at O’Hare, and transfer to the Blue Line “L” train into downtown Chicago. That takes about an hour, as well, from Hoffman Estates into the city. So we have public transit in Hoffman Estates that can take you downtown relatively easily, quickly, and cheaply. The station opened in August 2018 and ridership is steadily growing, in line with the transit company’s projections.”

Hoffman Estates has also been very active in the sustainability arena, winning many awards for its sustainable practices and projects, such as LED lighting in the arena and public buildings, and several municipal buildings were designed to LEED silver or gold standards. The Village just adopted its second five-year sustainability plan, which has taken a broadened approach to the subject – focusing on good, sustainable practices from a business, facility, and operational standpoint, combined with environmental and green initiatives. To acknowledge best practices in that regard, the Hoffman Estates Green Business Recognition program assists local businesses to achieve their energy and environmental goals, recognizes businesses for their “green” efforts, and educates the community about opportunities and benefits of improving economic sustainability.

Hoffman Estates has also partnered with neighboring communities to bolster the manufacturing workforce pipeline in the region through the Golden Corridor Advanced Manufacturing Partnership (GCAMP). GCAMP strives to change the perception of manufacturing while encouraging students to consider a career at one of the many fantastic advanced manufacturers in the area. The Village works with GCAMP to maintain the area’s status as the largest manufacturing corridor in the State of Illinois and to attract and retain Hoffman Estates’ manufacturing firms.

Hoffman Estates has become one of the premier suburban communities in Illinois – conveniently accessible to all major attractions within the Chicagoland area and the Midwest, with accommodations, dining establishments, great shopping, entertainment and outdoor recreation available to suit every taste. The Village has made major strides in the areas of business and economic development, interagency cooperation, and growth management, as well as offering good employment prospects, excellent educational amenities, and a modern infrastructure. With so much going for it, the Village of Hoffman Estates is poised for the future, fulfilling its motto of “Growing to Greatness.”

Who: Village of Hoffman Estates, Illinois

Where: Suburb of Chicago, Illinois

Sensient Technologies is a trusted partner for food and beverage manufacturers and prides itself on understanding drivers of consumer satisfaction.

Our operating philosophy is inspired by; our integrated portfolio of natural flavors, colors, and taste modulation technologies, our focus on customer satisfaction and more important our depth of knowledge and expertise in a range of food and beverage applications.