Imagine the acceleration of a dragster or the lowering of an airliner’s landing gear. Then ponder the Michigan company whose innovation has made a useful item even better.

Such is the role played by Peterson Spring, whose products range from those found in the aforementioned cars and airplanes to something as omnipresent as the common lawn mower.

“We don’t just make springs,” said Don Lowe, the company’s senior vice president for sales and marketing. “We are a designer and manufacturer of engineered metal products, which includes springs, wire forms, spring-steel clamps and hose clamps, retaining rings. Everything we make has been engineered for a specific application.”

The corporate story traces back 100 years to 1914, when Norwegian blacksmith August Peterson arrived in Michigan to produce goods for the burgeoning railroad and automotive industries. 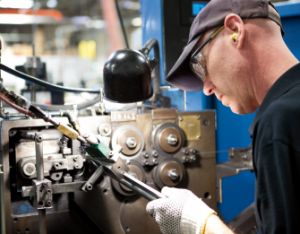 Three generations of Petersons ran the company through 2008, when a six-member management team was brought in. All but the chief financial officer had backgrounds in engineering, which helped the company maintain its efficiencies and fueled a diversified emergence into many new industries. “This brought in a fresh set of eyes,” Lowe said. “A collage of learning and knowledge from different backgrounds, which could be brought to the organization and used as a means of growing the organization to the next level.”

“What I saw in the older family-style of operations, divisions were being run as individual, autonomous profit centers,” he said. “The new management team centralized operations, created a standardization in quality systems, cost-estimating systems, and communications. Where before, each division may have adopted own practices, but now those are shared so we can grab common efficiencies. As a solution is to share, so that other divisions gain those efficiencies as well.”

Technology and equipment investments yielded dynamic engineering, tools and resources, and, Lowe said, a five-year strategic plan was developed to help the outfit go from good to great.

“We recognized that we’re already making engine valve springs for General Motors,” he said. “We like that business, and that customer likes us. Why not make them for other OEMs? And why not for other applications, like marine engines, snowmobiles, Jet Skis. Our objective was to go and get that business, and we’ve been successful at it.”

Along the way, there’s been a boost to bottom-line company morale, which fuels innovation and creates bottom-line financial progress. Annual performance reviews have fostered a new working environment as well, which Lowe claims has led to efficiency, productivity and innovation, while helping the company retain focused and driven employees.

“This company is actually hungry for innovation from everyone in the organization. Doesn’t matter whether you’re executive in a carpeted office, engineer or the guy who puts paint on the rails,” he said. “We asked, ‘What is it about each one of us that can help compel the company into the future with distinction?

’”Peterson Spring has expanded with plants in the United Kingdom, Canada and Mexico, with agricultural and automotive opportunities in South America and/or Asia perhaps next on the agenda. Alongside that growth, changes in consumer products will necessitate changes in the company’s contribution to those products. 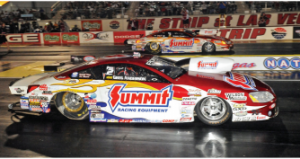 “Engines have gone through an evolution, and are much more complex,” Check said. “They also have much different valve springs, which have higher performance requirements. And now, with mandated fuel economy, there’s a whole lot more technology going in to squeeze out every drop of fuel.”

In designing and manufacturing precision materials for the racing industry, Peterson has adapt innovations to other industries, which will help drive further success for the company.

Lowe said current market dynamics have shifted back onshore after years of off-shoring.

“We have seen some business lost to Asia, but we have also won some business in Asia,” he said. “In the past, some customers moved their business overseas for the cost advantage, but found after a couple years those cost advantages erode because wages have gone up, transportation costs have gone up, and their quality is going down. The value that was perceived to be there is gone.

”Additionally, some of the company’s pre-recession competition is no longer around, which, he said, in some manners validates Peterson Spring’s mantra of innovation, technology investment and in-house manufacturing discipline.

“The strong survived, Lowe said, “and got stronger as a result.”

Check out this handpicked feature on Keller Williams Southern Arizona – Preparing for the market shift.

WHERE: Corporate headquarters in Southfield, Mich. 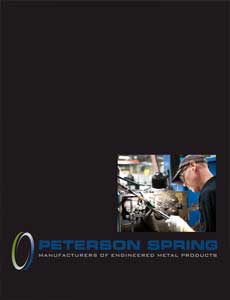