Preparing for the market shift

Formed in 2010 by Anthony Azar and David Jones, Keller Williams Southern Arizona started growing from the get-go and has never looked back. It started with 200 agents (70 percent came from Azar’s former Realty Execs franchise) and now has close to 450 working from two Market Centers, with three offices in Tucson, and one office in Sierra Vista. Joesler Village Market Center, in the north-central area of town, has an extended office in Oro Valley in northwest Tucson, and Kolb la Playa on the east side has a business center about an hour south of town in Sierra Vista. 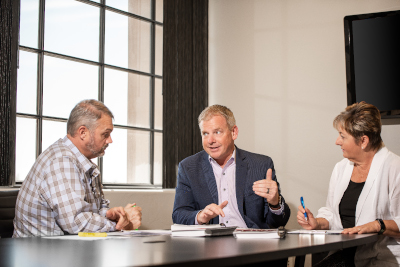 Operating Principal (OP) of Keller Williams Southern Arizona, David Jones, describes Keller Williams as a systems-based company, with its own proprietary models and technologies. “I tell people, if you buy a McDonald’s and run it like a Jack-in-the-Box, you’ll probably go out of business. If you buy a Keller Williams franchise, you run it like Keller Williams.” The philosophy on agents is that every agent is a business owner. All KW training and coaching is geared to help them build their business. It’s an interdependent model; agents are trained to be independent, given autonomy, an attitude toward business, extensive coaching, programs, and technology.

Agents working under the Keller Williams Southern Arizona real estate model excel in a productivity-specific environment. Everything is done to help them succeed. As the OP, Jones could go out and sell if he wanted to, but the Team Leader (manager of the office) is under a non-compete model. “I no longer sell,” says Jones, “I consider myself a Mega Agent because I succeed through all the other agents. It’s important for them to know the guy running the office is not competing against you.”

Keller Williams Southern Arizona has one ownership group that covers their entire territory – an ideal opportunity for synergy in a geographic area. Its agents cover every type of property sale: luxury; rural land; short sales; REO (real estate owned by a lender). The average selling price for a house is $200,000 to $250,000 – that price point in the Southern Arizona/Tucson area will sell quickly. It’s the sweet spot of the market; the center target. But there are also agents specializing in the south part of town that are still selling $130,000 houses. Jones says he loves having such a diversity of agents all playing under the same roof.

Currently, listings are down and inventory is down, which is creating a bit of urgency. Yet the market could shift at any time. According to Jones, “Buyers could just absolutely stop, because they’re buying so fast right now. Three months ago, I would have said homes were selling quick – not fast – and prices weren’t skyrocketing. Right now, we’re seeing appraisals being tested. That means prices are trying to go up. Every agent I’m meeting with is having a record month, but in our training, we’re preparing them for a shift.”

Keller Williams believes in “for agents, designed by agents.” They call themselves a bottom-up company – training is done to teach people how to be the best business person they can be, not just how to be a better salesperson. The company is unique in that you could start as a new Keller Williams agent and, within three to five years, grow your business by learning how to read P & Ls, how to hire, to train, how to run your own team, if you choose. Or, you could take those same concepts, as a single agent, and learn how to get more done in less time.

Jones insists, “It’s not about the brand, although Keller Williams has a great reputation and you might as well use it. New agents get the benefit of the name and, as they grow, they start their own brand and use Keller Williams with it along the way. We’re always actively looking for more people for our company. Who’s a great fit? Anyone with high standards who wants to be part of a great culture; we’re literally going to overload you with technology and systems to plug in to grow your business.”

Speaking of technology, Keller Williams Southern Arizona stands firmly on middle ground in that arena. It doesn’t believe brick and mortar is going away, because human beings will always want personal interaction. On the other hand, an amazing amount of training videos, resources, and tools can be accessed and downloaded by agents online through KW Connect. A business tool called Career Growth Initiative (CGI) does lead generation, tracks numbers, creates reports, all on the KW Connect website. Keller Williams also has high-tech referral systems and a virtual assistant called ‘Kelle’ (an artificial intelligence app for mobile phone use).

Jones explains, “You access the app on your phone and say, for example, ‘Hey Kelle, help me find an agent in Kalamazoo.’ When you get it narrowed down to the agent you want, you send them the referral. Because our whole system is interlinked, the referring agent can track it to see when the deal closes and make sure he gets paid. All the agent stats are available. Gary Keller was very straightforward to new agents, telling them they have to do some business to get their numbers up on the system, to get some of those referrals. We’ve got 150,000 agents in North America and Gary Keller is in the office every day sitting in labs with people from around the country. That’s where they’re improving our AI, our referral system, creating the Keller Cloud to store our data. They’re really being innovative with technology to help people become connected, globally.”

On a local level, KW Southern Arizona has great corporate tools to help people create their websites, learn to create mail and email campaigns, and control data management with the Edge database management system. The interesting thing about all Keller Williams technology is that any data loaded into the system belongs to the agent. If they decide to leave, they download that data and take it with them.

Every real estate business relies on partners in related sectors for their success. Keller Williams Southern Arizona has a great partnership with Catalina Title, its preferred in-house title company. And it finds Movement Mortgage very enjoyable to work with because it has a culture very similar to KW, based on fun, productivity, and giving, with high integrity and high morals. It does quick closes and is involved with KW Southern Arizona, every day. Other valuable relationships include Old Republic Home Protection and 2-10 Home Buyers Warranty (KW Southern Arizona’s first partnership in 2010).

Community involvement is an important pillar. “Our goal is to do four big community service or charity events per year,” says Jones. “This year, on Keller Williams Red Day, we had 125 of our people helping out at two different locations of the Food Bank. We also do an annual golf tournament and pick a charity or two to support. In another wonderful initiative, one of our Team Leaders, Chase Delperday, takes a group of agents down to Mexico, twice a year, to build houses for people.”

Keller Williams is the only company that offers a career path where a person can start as an individual agent and have the options to run a team, become an expansion agent, or a coach, or a national trainer, or have ownership in a Market Center. Sixteen years ago, David Jones was a single agent, now he owns two Market Centers, and works as a KW MAPS coach. “It’s always nice that there’s a path,” says Jones. “Real estate is a great way to make money, but sometimes people just hit a dead end because they get burned out. At Keller Williams, your business grows to the extent you do. Helping agents become better people is a bold law of the company.”

Going forward, there are no plans for more locations. The main priorities are the three Tucson sites and one in Sierra Vista. “We hired new CFOs for two operations, I’m super excited about that,” says Jones. “And we have new leadership going in on our east side office. We’ve been here since 2010, and we feel like we’re just getting started. We’re completely out of debt, our financials are strong, and the future is looking huge.” 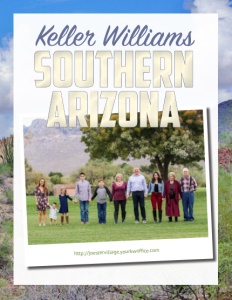