Location: Lake Jackson on the beautiful Gulf Coast of Texas. The year was 1996, and John and Patti Weaver were starting to build homes in partnership with John’s father, Bobby. Six years later, the husband and wife team branched out on their own as MBL Homes, constructing a couple of houses a year at the time. They soon made a name for themselves, and by 2007, the firm’s popularity had grown enough to incorporate as Heritage Residential Solutions, and add partners – including designer and project manager Michele Smith.

Known today as Heritage Custom Homes, this exceptional Texas design/build company provides high-quality house construction and remodelling services throughout Brazoria and Matagorda Counties. Comprised of a lean, talented team of four employees, and a wealth of professional sub-contractors, Heritage Custom Homes completed 35 builds in 2017, with an average price point of $350,000. They have also been busy with remodels, helping people get back into their homes following the devastation of Hurricane Harvey.

“The business climate really boomed for us in 2007,” says co-owner John Weaver. “There was growth in the local industrial complex, at the time, where we are in southern Brazoria County. It’s a heavy petrochemical area made up of several communities with a little over 100,000 folks, and we expanded just to the west into Matagorda County because of the nuclear power plant expansion. We were called over to work with them to develop a community and build homes in a subdivision for the future incoming engineers and operators that would run the plant.” 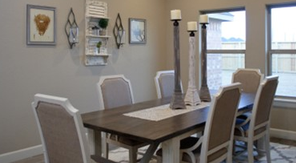 Heritage Custom Homes is pleased to have hired many of the same sub-contractors continuously since 2002; providing 60 percent of the work for some trades, 25 percent for others. Weaver notes, “Our plumber, who was with us since the beginning, unfortunately passed away. But his crew got picked up by another organization, so we’re still using the same guys. When it comes to valuable long-term relationships with our subs, they know what we want, and we know what they’re going to provide us.”

The company’s only office is in Lake Jackson, Texas, but they are extremely mobile – going to the homes of custom clients to facilitate their building requirements. If a client provides the drawings for a house plan they want built, Heritage will work with those and modify to suit. They also have a number of exclusive floor plans, which they adapt and improve for individual client preferences. Three main services make up their repertoire: 1) develop and build subdivisions of custom houses. 2) build on people’s own lots. 3) high-end remodelling, such as kitchens, living rooms, etc.

Designer/partner Michele Smith describes their typical customer as “individuals looking to build a home. A lot of times they’re wanting a bigger or smaller house in the area because their needs have changed. We also work with real estate agents. Generally, those clients come from out of the area, and are looking for a local builder.”

Remodelling wasn’t intended to be part of the company offering so soon, but Weaver says the late summer of 2017 changed all that: “We had been tinkering with the idea of stepping into upper-end remodelling, and hired Director of Marketing, Brandon Gee, to help us facilitate that. Then, on the Gulf Coast, we had a thing called Hurricane Harvey, and our county was hit very hard. So, we’re helping flooded folks to get back into their houses. We weren’t doing a large volume of remodels until recently, but it’s awkward because some of the homes we had built in the past were flooded and we’re just trying to take care of our neighbors.”

Because of their good relationship with sub-contractors, Heritage has been able to get them started on projects sooner than others in the area. “However,” Smith cautions, “most people are not back in their homes. We’re glad to be helping them, but it’s not a great situation because this isn’t something they wanted. Most times, when you’re building a new house you’re excited about it, and planned for it, and have lots of thoughts about it. These people were forced out of their homes. And with a major remodel and move in less than 24 hours, they are not in a great place, emotionally.”

“It takes three to four months to go through the process of fixing everything,” she adds. “And they have had to wait for insurance money and adjusters. It was such a large-scale disaster that everything is taking more time than anybody wants. Most of the people you saw on the news in the Houston area are not back in their homes, and won’t be for a while.”

Competition among home builders in the region is healthy, and Heritage Custom Homes emphasizes the building of relationships as its key strength. Gee notes, “We don’t just build homes, we really strive to understand where people are coming from, and the situation they’re in. On the remodel side, when you’ve been flooded like this, it’s a psychological thing. You’ve lost your house. So, trying to become friends with these clients, and being there in their time of need, is the cornerstone to what we’re trying to accomplish here.”

That client relationship building also translates to the

custom side. Whether it’s designing a floor plan that better fits a particular need, or a color scheme, or design layout that enhances one of the homeowner’s goals, Heritage Custom Homes takes a more personal approach than the standard Houston area home builder.

Supplier relationships play a significant role in the company’s success. Weaver says, “McCoy’s Building Supplies have been with us from the beginning. Their prices are extremely competitive, and service is second to none. It’s crazy how great they are at meeting the builders’ needs. Then, we have local subs we’ve been using for a long time: Davis Air Conditioning out of Houston south; and Sain Electric, a second generation business. Individual subs are very specific to this area. One of the framing crew, Noe Cruz, has been with us since day one and is a phenomenal gentleman. He manages change, never becomes frustrated, and gets the job done. I would love to handle issues as well as he does.”

Looking ahead, both a five-year expansion plan and a technological expansion plan are in place to handle future growth. Gee explains, “We are implementing some of the latest Google and Amazon smart home platforms, to make sure what we offer in our homes is consistently advanced, but not too complex for our homeowners. We’re looking at adding smart light switches, smart home assistance, smart locks – there’s a lot of technology that’s being evaluated as to its usefulness and effectiveness in the home setting. We have a pilot program of smart switches installed in one of our homes, which we’re testing with a smart thermostat and smart locks. Depending on the results, it may be rolled it out as an option for all our clients.”

Heritage Custom Homes has every intention of continuing as one of the best home builders in their current area, while looking to expand into the Houston, Dallas, and Austin metro markets. Capitalizing on their success on the Gulf Coast, they want to offer what they affectionately call “the Heritage difference” to residents in other regions of Texas. It’s their “you-focused” approach to making clients the center of the building process.

Of course, that will mean adding to their team, and Weaver has it all figured out. “When we move into the Houston and Dallas markets, we’ll have to put a team together that has the same goals we have for working with clients,” he avers. “We’ll have a system of tools in place to streamline that. In Houston, there will likely be a couple of folks, but Fort Worth/Dallas area will need a full team for the custom builds. In a design/build, we’re literally sitting down with clients, designing what they’re wanting right there and then. It takes someone with special skills to do that.”

Smith adds, “What John doesn’t mention, is that he does the design himself. He’s working on the drawings right there with the client, so we’ll have to replicate that when we expand. That’s going to be a challenge.”

All in all, Heritage Custom Homes is about building more than a house. They pride themselves on building relationships, and ultimately a happy home for each and every client. Their houses are some of the most sustainable in the industry, designed to last a hundred years. According to Gee, “We have some of the most complex engineered foundations; we want our houses to last a lifetime. Our construction process is a few steps above average, our build quality taken to the next level. It’s the Heritage difference – making sure everything is about the client, not about us.”

WHERE: Brazoria and Matagorda Counties, Texas 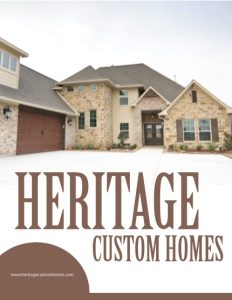