Business View Magazine interviews Peter Pantuso, President of the American Bus Association, as part of our focus on the transportation sector.

“A group of operators were seeing more and more government intrusion and interaction with their business,” says ABA’s current President, Peter Pantuso, about the Association’s genesis. “They thought that they really needed to come together as an industry and address some of what they were seeing with a collective voice. Fast forward 91 years and it’s still the focus of the Association – government and regulatory affairs, having a voice in Washington and, in some cases, in states and localities; being able to collect the wisdom of the Association; being able to share that with lawmakers and regulators; and then, providing information back to the industry.”

Although the Association’s focus has remained the same over the years, Pantuso says that the industry changed dramatically several decades ago, when it was deregulated by the federal government. “Back in the early ‘80s, the industry was regulated in terms of where you could operate,” he explains. “If you wanted to put a bus into service between New York and Washington, D.C., for example, you had to get approval from the Interstate Commerce Commission to be able to run that route; the same thing in routes all over the country. And then, deregulation came about, which said, ‘you can go wherever you want to go.’ There are still regulations on the industry, but not in terms of where it could operate. So, the industry expanded; it was a lot easier to come into the motor coach business and run services wherever you wanted to. Today, we move a lot more people than we did back in 1926; we provide about 600 million passenger trips, annually.  Amtrak does under 40 million, and the airlines are somewhere in the 700s. So, we’re a little bit smaller than the airlines as an industry, and a lot bigger, in terms of the number of people we move, than Amtrak.”

The modern ABA has a membership of approximately 800 private bus companies out of a universe of about 3,200 in the U.S. and Canada. “Those 800 companies represent about 65 percent of all the private buses or motor coaches on the road,” says Pantuso. “And our membership on the bus side is very diverse; we’ve got companies that have more than a thousand buses and we’ve got companies that have one bus. Beyond the bus side, we also have tour operators who plan and execute trips and tours. We’ve got about 250 of them.”

ABA’s largest segment is its travel industry members – some 2,500 tourism-related companies and organizations that work in partnership with the North American motor coach industry. They include travel and tourism companies, convention and visitor bureaus, destination marketing organizations, accommodations, attractions, food service organizations, and tourism service professionals, such as receptive operators who specialize in tour planning for a local area. “Lastly,” says Pantuso, “we’ve got companies as associate members who mostly service the bus side of the industry – bus manufacturers, engine providers, tire manufacturers, insurance providers, etc.”

Pantuso says that the ABA attracts new members in several ways. “We participate in a lot of industry events that go on around the country,” he reports. “There are a lot of state association bus meetings; there are travel conferences in almost every state, throughout the year; there are regional travel and/or bus meetings; there are other associations that run national meetings, both in the U.S. and Canada. We have staff at a lot of those events and I speak at some of them. I’ll speak at governors’ conferences, throughout the year, as well. So, it’s an opportunity for us to be visible and not only tell the industry what’s going on but also be able to encourage them to participate in the ABA. There are a lot of companies that just don’t understand the role of an association – they don’t want their competitors to know what they’re doing, or they don’t want to expend the funds; some people are just not joiners, or think that they’ll get whatever information is necessary through someone else. It happens with all associations when trying to bring members in, but it behooves us to try and develop that right value proposition and educate people.”

The ABA’s staff consists of about 20 people. “A large segment of the staff works on meetings, education, and membership,” says Pantuso. “We’ve got staff in the publication/media/communications side. Then we have our government affairs/regulatory/policy group. Those are the three big buckets. We’re probably typical of most trade associations in terms of functionality. We also have staff that work with our foundation, which does research and provides over 20 industry scholarships annually to the industry. We’re a little unique in that we’ve brought in a couple of smaller organizations into the ABA to manage that are in the travel and transportation space. For example, there’s a Florida Motor Coach Association is one that we manage.  For nearly 30 years we have managed the National Bus Traffic Association, a clearing house for the intercity-scheduled bus industry.  We also provide the administrative management and support to Skal International USA (SIUSA).  So, in that respect, we might be a little different than other associations with the outside management pieces.”

According to Pantuso, the motor

coach industry is always changing and evolving, especially in its technological requirements. For example, the federal government mandated that all buses were required to have Electronic Data Recorders, basically electronic log books, installed by the end of 2017. “There are always new regulatory and compliance issues coming up, like electronic logging,” he states. “There are some regulations pending that will deal with redesigning portions of the bus, like the windows and the roof structure, and possibly the doors.”

“I just got back from the largest bus show in the world that takes place in Belgium, every other year,” he continues, “looking at where the rest of the world is moving in terms of requiring electrified vehicles operating on their streets. A lot of European cities, for example, are moving quickly toward turning their transit systems into electrified transit systems. They’re getting rid of their diesel engines, and while that may not happen here for a long time, it’s something that’s on the radar and something that we’ll continue to monitor. As they eliminate diesel for transit buses, they are also saying to the private bus industry ‘we don’t want your diesel engine buses in our city after 2025.’ It’s a way off, but those are the things we always need to be on top of, helping to prepare the industry for what’s coming, what the response will be from the industry here, and how they’re going to cope with that huge change in the way they operate.”

Pantuso adds that, in the coming decade, another big change for the industry will be in the way people book tickets and plan their trips. “Everybody is moving toward that ‘Uber society’ if you will – you want it when you want it, where you want it,” he says. “And the motor coach and bus industry is going to have to respond to that in some fashion, as well. We see the shift in fewer people driving, more people moving into cities, and a younger generation saying ‘I don’t need a driver’s license,’ or, if they’re living in urban centers, saying, ‘I don’t need a car; but if I do need one, I’ll rent one by the hour.’ Those kinds of shifts in behavior are having an impact on our industry in a positive way, because the bus provides an extremely good option as compared to the plane or the train, if someone wants to go from New York to D.C., for example.

“Also, we’ve got companies coming into the market that don’t own buses, but are crowd-sourcing buses. All of a sudden they’ve got a group of 40 people who say, ‘I want to go to New York, tomorrow.’ So, they put a bus in service for 40 people. That kind of mindset in the way people travel is going to have an impact on our industry, so we’ve got to be prepared for that and let the industry know that it’s coming.”

Pantuso adds that the ABA will also continue to work on changing the public’s perception about the motor coach industry. “Our challenge is to make people aware that this is not your grandfather’s bus,” he avers. “It’s not the same product; it looks different, it feels different. My view of the bus is a cardboard box with wheels. And that box can have anything in it and you can really let your imagination run. You can think about television and movies, WiFi, a conference room, food and beverages, big luxurious seats. That’s not the future; in some cases all of those things already exist on the same vehicle.”

Finally, Pantuso elaborates on the wider societal benefits that the motor coach industry provides: “Not only does it move people for fun, it takes people out of their cars; it reduces the carbon footprint, it connects with a lot of other modes – taxis, trains, metro buses, intercity buses, all of that moves together, seamlessly. And it’s a flexible system in times of need. When Katrina went through New Orleans, it was the private bus industry that was able to help people. The city buses were flooded, the school buses were flooded, and there were hundreds, if not thousands, of private buses that went down there and moved people around. I remember during and after 9/11, when it was the private buses that were moving people in and out of New York because a lot of the other systems were shut down. The private bus industry is like a strategic transportation reserve – available and on duty that can be deployed wherever and whenever.”

“That’s who we are,” Pantuso says, in summation. “In some ways we’re an unsung hero. We blend into the background. People see a bus and may not think much about it – a big vehicle that’s in my way. But the reality is there’s a lot more to it.”

Check out this handpicked feature on Making America Run By Robert C. Osborn – President of the Pipeline Contractors Association.

WHO: The American Bus Association 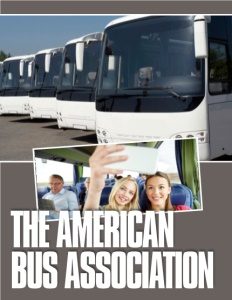