The Savannah International Trade & Convention Center (SITCC) is a 330,000-sq.-ft. complex, located on Hutchinson Island, across the Savannah River from the city’s world-renowned historic district. It is a state-owned building on state-owned property, built by Chatham County, and operated under the auspices of the Georgia World Congress Center Authority (GWCCA), which also manages the Georgia World Congress Center, and the Centennial Olympic Park in Atlanta. The mission of the Convention Center is to attract and produce events that generate economic impact for Savannah, Chatham County, and the State of Georgia. 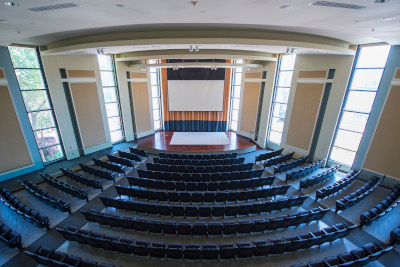 “The project was conceived by the local Chamber of Commerce as a business and economic development project in the early 1990s,” says Mark Smith, SITCC’s Board Chairman. “In 1993, we received an $18 million grant from the State of Georgia in the form of bonds. That was matched by a local, special option, one-penny sales tax. So, another $37 million was appropriated from that sales tax and that gave us the funding to go forward. In the mid-‘90s, a site was selected on Hutchinson Island on land that was donated by the CSX Railroad Company. The building has been operating now for over 18 years and has continued to build a foundation of business including trade shows, conventions, meetings, and special events.”

The Savannah International Trade & Convention Center includes: 100,000-sq.-ft. of exhibit hall space, a 25,000-sq.-ft. ballroom, a 367-seat auditorium, 13 meeting rooms, and four board rooms. It employs 50 full-time, and 50 part-time staff, plus hundreds of temporary employees, as needed, who host approximately 160 events per year. According to its General Manager, Sherrie Spinks, there is no “typical” client. “We do everything under the sun,” she declares. “Of course, we focus on trade show business, citywide business, and association business. Then we fill it in with sporting events, consumer shows – we have boat shows, tattoo shows, dinosaur shows; a rock’n’roll marathon; lots of corporate banquets, lunches, and dinners; we’re doing roller derby, volleyball; we’re going after everything we can.”

One of Savannah International Trade & Convention Center’s advantages in the competitive world of convention centers is its location – Savannah is one of the top visitor locations in the world and consistently lands in Conde Nast’s Travel and Leisure rankings of Top Ten Cities to Visit in North America. “We are a destination that people want to come to, so that helps us,” Spinks remarks. In fact, in 2017, Savannah had an estimated 14.1 million visitors who generated$2.91 billion in spending. 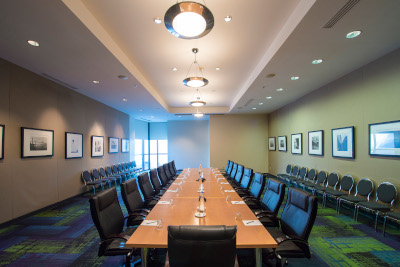 Smith adds that within Savannah, itself, SITCC’s location offers another “strategic” advantage. “The Center is right across the river from the city’s main historic district –  the largest historic district in the United States at 2.5 square miles – and River Street, is the main attraction of Savannah,” he explains. “It would be comparable to Bourbon Street in New Orleans, or the Riverwalk in San Antonio, or Broadway in Nashville. And it is easily accessible by a quick water ferry ride.” In addition, right next door to the Center, on the 2000-acre Hutchinson Island, is the Westin Savannah Harbor Resort. “It’s not just a hotel,” says Smith, “it’s an urban resort. It comes with a signature, 18-hole golf course, a spa, and an automobile race track. Another unique feature is that Savannah is the third busiest container port in the country. These huge container ships pass by the facility on a regular basis during one’s visit to the Center.”

Another advantage that Savannah International Trade & Convention Center has is its relationship with its parent organization. “We capitalize on Georgia World Congress Center systems,” notes Spinks, “so, as a small facility, we have increased capabilities in technology – WiFi, IT security – the bandwidth is much larger than most convention centers of our size.” The Center utilizes cutting-edge IP Cameras with high-end, analytic capability. With over 140 feeds, the security department is able to have a clear picture of the environment inside and outside of the facility. To keep up with the demand for high speed internet the Center more than doubled the bandwidth of its circuit. So, visitors to the facility have access to that high speed internet via a world-class wireless network capable of handling such high densities. “And we’re adding charging stations for customers to charge their phones and laptops,” says Spinks.

The Savannah International Trade & Convention Center is currently planning an expansion that, when complete, is expected to double the size of the facility. “Our business model supports our efforts and our customer base is demanding it,” says Smith. “We have over 50 customers who are asking for more room. So, we’re planning on doubling the size of the exhibit hall and adding a second ballroom, which would be a 40,000-sq.-ft. ballroom versus the 25,000-sq.-ft. ballroom that we have now. We’ll also be adding an additional 24,000 square feet of breakout meeting space and a 900-space parking garage.”

“We have received $9.3 million in two separate appropriations from the state legislature to facilitate the design of our expansion,” he continues. “And, since we are a state building, we are working through the state process to select a construction manager and hope to complete that process by the end of August or first of September. We hope to secure major funding from the legislature, next winter. If we stay on schedule, we hope to have a groundbreaking about one year from now, and it will take two to three years to build, so it would open sometime in 2021, or 2022.

“It will move us from 155th in size in the country to about 70th, and also put us in a different realm as far as being able to attract larger meetings and groups, which will complement the explosion in hotel rooms that we’re experiencing here in town. We have over a thousand hotels rooms in construction. We just had 500 additional rooms open in the last year, 1,000 rooms are under construction and 1,000 rooms in the pipeline. By the time we have the expansion complete, we will have an additional 2,500 high-end hotel rooms in close proximity to the building. That will allow us to compete for the larger conventions.”

Spinks agrees that the expansion will not only satisfy the Center’s traditional clients, but will also allow us to better compete with the large regional centers in other destination cities, such as Nashville, San Antonio, New Orleans, Orlando, and Ft. Lauderdale. “We know of 50 customers that need more space, so, first, we’ll secure our long-term customers,” she says, “and then, we’ll certainly go after the other customers that want to come to our facility, but due to space limitations have not been able to make Savannah home for their event.  We will continue to host multiple events at one time.”

A world-class facility in a world-class city, the Savannah International Trade & Convention Center is sure to continue to satisfy its visitors for many years to come.

Check out this handpicked feature on The Miami Beach Convention Center.

WHERE: Hutchinson Island in the Savannah River

tvsdesign – tvsdesign was founded in 1968 and is based in Atlanta, Georgia with additional offices in Chicago, Shanghai, and Dubai. The company provides architecture, interior design, planning, and sustainable design services in the United States and internationally. tvsdesign has designed several notable buildings in greater Atlanta and beyond throughout the years, including the Omni Coliseum and Complex, the Georgia Dome, the AT&T Promenade buildings, the CNN Center, the Concourse at Landmark Center in Sandy Springs, the Georgia Aquarium, the Georgia World Congress Center buildings, and the Mercedes-Benz Stadium. – www.tvs-design.com 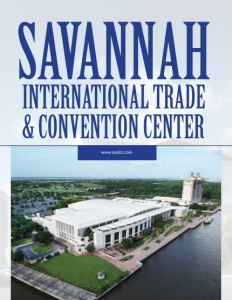