Tucked into the far eastern ledge of the province of Ontario, near the borders of Quebec and the United States, is the cozy, yet stirring Russell Township. While only 25 miles southeast of Ottawa, a municipality with approximately one million residents, Russell Township remains intimate, home to a humble population of 16,520. Its size does not define its potential though; its residents include young families, educated professionals, bright entrepreneurs, and skilled tradespeople who enjoy the rural setting and close proximity to neighboring city assets. What they also enjoy is being the first in on a secret: Russell Township is on the verge of a boom.

Russell Township began building the foundations for strong and steady growth a decade ago. Like all endeavors with an aim to germinate, the township first sourced water. The town council requested and received a $8.95 million grant from the province of Ontario and from the Federal government to facilitate a 17-mile pipe from Ottawa to the township. The $24.75 million project gave the township’s communities access to water from the Ottawa River, rather than local and aging wells.

Jean Leduc, Chief Administrative Officer of Russell, discusses the benefits of this investment:

“Since then, we’ve had the water quantity and quality we needed,” he explains. “With that secured, we were then able to invest in sewage capacity so we could get our main infrastructure in line. These two projects were the kick-start to the second round of growth that came in 2012.” 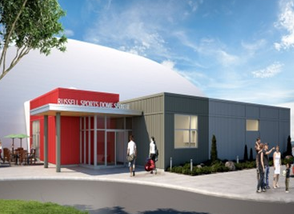 As people began to see the benefits Russell had to offer, they began moving their families into the township’s communities. Leduc elaborates: “We have a lot of schools, primary and high schools, that teach in French and English and offer Catholic or public education. The options are attractive to a lot of young families who come to our communities. We have over 20 parks, two sports arenas, recreational trails, and a bike path along the old rail system. Those are the key features that have been attracting growth. Now, we’re working on job creation.”

The Township of Russell has experienced an 8.3 percent average growth rate over the past several years, three points above the average for Ontario. Because of this growth, the Township needed to revise all its master plans, which, in turn meant defining new economic drivers.

Dominique Tremblay, Director of Planning, Building and Economic Development, explains: “We have a lot of growth in the sector of warehousing. Over the past four years, we’ve nearly reached capacity at our city-owned industrial park. The rate at which we’re selling our property is a lot higher than the property we have left, so we’re currently reviewing our land-use plans to add 120 acres to our capabilities.”

currently underway, as well. New roads are going in to provide access to entirely new business centers and help existing traffic flows. City services such as fiber optics and natural gas are also being routed towards new development. To top off a list of motivators that the township has rolled out, Russell has implemented a Community Improvement Program tax incentive in its 2017 business plan.

With current plans to finish infrastructure build-outs within the next five years, the Township expects to be able to accommodate growth at the rate it’s seen over the past two years for the next 20. Tremblay states that the estimated population of Russell Township in 2036 will be 23,800 – which would make a nearly 50 percent increase in its current population.

Meanwhile, the Township does not overlook its existing businesses in its efforts to grow, and maintains an active business support network. Connect with Russell is an event all businesses are invited to attend and an opportunity for business owners to learn about available resources the city provides, such as grants, easements, and even young entrepreneurs loans. The events also serve as networking opportunities for the owners, providing time to present themselves to their peers as well as learn about potential service providers and partners.

Then comes resident retention. The Township is addressing its need for a downtown area. As Tremblay explains, “In our official plan right now, we do have a village core identified. Because it was something that was never considered until this past decade, there are a lot of single detached dwellings that are in the core downtown center. We’re working to build smartly from here on to create a downtown center. It’s going to take a while but we’re working towards it through design guidelines.”

The Township has fully constructed a state-of-the-art sports dome, aimed to serve as a sports and entertainment venue in its downtown district. The $4.5 million project will be a 60,000 square-foot dome that features both artificial turf and solid flooring suitable for year-round sports. It will include a training gym, interior tennis courts, and an attached restaurant. The township believes this year-round space for residents and guests to visit, come together, and enjoy will become a lynchpin to an active downtown scene. The dome is to open in January  2018, which will be almost ten years after the municipality began tapping into the Ottawa River for its water.

With healthy roots and strong residential growth, the initial investments into the Township are obvious. Leduc concludes, “We’ve been proactive over the past several years to accommodate the growth we’re seeing now. So all our planning and preparations are paying off. We’re here and ready for it.”

WHO: Russell Township, Ontario
WHAT: A municipality of 16,520
WHERE: Eastern Ontario, near the borders of Quebec and the U.S.
WEBSITE: www.russell.ca 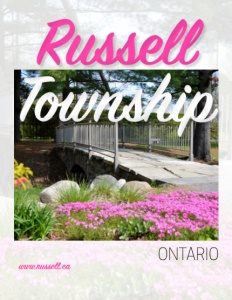