June 2018Past IssuesSupply Chain and Logistics 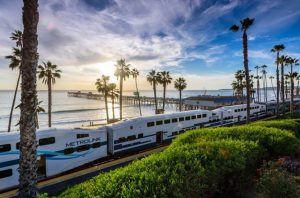 Average weekday ridership on Metrolink’s seven lines is approximately 45,000, who travel approximately 441 million passenger miles per year, making it the eighth-busiest commuter rail system in the U.S. by annual ridership. The Metrolink fleet consists of 55 locomotives and 258 passenger cars. It has an annual operating budget of $243 million, with revenues of $100.6 million, plus subsidies from its member counties (except Ventura), State Rail Bond funds, State Transit Assistance funds, State Highway Account funds, State Transit Capital Improvement funds, and Federal Transit Administration Capital funds, to the tune of $142.4 million. It is governed by the 11-member, Southern California Regional Rail Authority Board – four members from Los Angeles, two each from Orange, Riverside, and San Bernardino, and one from Ventura.

Metrolink has about 250 in-house employees at its headquarters in the iconic Los Angeles Union Station in downtown L.A., and maintains four large contracts with outside entities: one with Amtrak for rail operations; one with VTMI for rail maintenance and construction; one with Mass Electric for signal communication system maintenance; and one with Bombardier for car fleet maintenance, for a total workforce of about 1,000.

Arthur Leahy, CEO of Metrolink, and former head of the Los Angeles County Metropolitan Transportation Authority, believes that the most important benefit of the Metrolink system is that it reduces approximately nine million car trips a year from southern California’s congested freeways, while eliminating 110,000 metric tons of greenhouse gases, annually.

“Twenty-five or thirty years ago, when I was growing up here, nobody could have imagined the magnitude of the growth here, or the need to have a commuter railroad,” he says. “But that’s all changed. People here now realize that, on a global scale, it’s on a par with New York, and bigger than Chicago, Philadelphia, and Boston. So we have to have the things that big cities need. The freeways are basically done. They’re not going to be expanded or widened. So, what we face here is a growing population which is spreading out because of the high cost of housing in the central area, and we have freeways with fixed capacity. That means that as time goes on, the freeways are going to become more and more congested. So, the only practical way to relieve the freeways in southern California is Metrolink.”

In a further move to help clean up southern California’s air, Metrolink has begun replacing its aging fleet with state-of-the-art, Tier 4 locomotives – the cleanest diesel locomotives in the world. Tier 4 locomotives are compliant with the latest U.S. Environmental Protection Agency (EPA) emissions standards and will reduce particulate matter and nitrogen oxide emissions by up to 85 percent, while providing 57 percent more horsepower. Metrolink’s Tier 4 locomotives are also equipped with Positive Train Control (PTC) and Crash Energy Management (CEM), which absorbs energy in the event of a collision.

In fact, Metrolink was the first passenger rail  in the nation to incorporate the life-saving PTC, a GPS-based safety technology that can stop a train and prevent train-to-train collisions, over-speed derailments, and unauthorized train movement. Metrolink’s PTC system combines GPS, wireless radio, and computing technology to send up-to-date visual and audible information to notify train crew members when a train must be slowed or stopped. If an engineer does not respond to the PTC warning system, onboard computers will activate the brakes and safely stop the train.  PTC ensures the safety of passengers by acting as a safeguard against human errors and other potential hazards.

“The PTC system will identify if a train is going too fast and bring it to a slower speed, or even stop it,” says Leahy. “It can also detect if there’s another train up ahead, somewhere, and it will make sure it stops the trains before there’s a collision. We’re one of the first in the country to get PTC to work and we’re really proud of that. That’s taken some effort over the past eight or nine years.” In addition, while Metrolink has installed PTC on all of its tracks, Leahy says that it is also working with Burlington Northern and Union Pacific to have an integrated PTC operation on the tracks that they own and share with Metrolink.

Another safety-related and efficiency issue that Leahy says Metrolink is tackling includes upgrading the system’s single track lines to double or triple-tracking, wherever possible. “Right now, we have a lot of single tracking on our major rail lines and, as a consequence, we can only run at a certain frequency,” he explains. “Plus, when something goes wrong, the whole railroad grinds to a halt. So, we have long-term plans to double-track and triple-track down in Orange County. We also have some tracks which are pretty old and need to be upgraded. We just made a grant application for what we call SCORE, (the Southern California Optimized Rail Expansion program), which is for money to upgrade our track, to enhance our bridges, and things of that nature.” 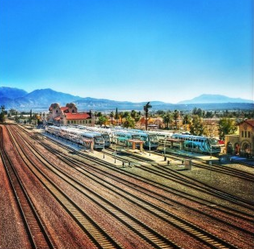 In fact, just this past April, Metrolink did receive an $876 million grant from California’s Transit and Intercity Rail Capital Program (TIRCP). Nearly half of the money will be used to extend run-through tracks at Los Angeles Union Station south across the US 101 Freeway, so trains don’t have to enter and exit from the north. This project could save up to 20 minutes in travel time for riders. The balance of the TIRCP funds will be used for significant investments in infrastructure called for in the SCORE plan, such as adding track, signals, and additional station platforms, so Metrolink can provide more reliable, frequent service throughout the key Metrolink corridors that serve Los Angeles, Orange, Riverside, San Bernardino, and Ventura Counties. Additionally, improvements at crossings will be funded to help ensure cities can implement Quiet Zones to reduce noise associated with the routine blowing of train horns.

In terms of providing all-around, better service to its customers, Leahy says that a fare reduction program, which was implemented on an experimental basis on the Antelope Valley Line, and which resulted in ridership growth, may be extended to the San Bernardino Line sometime in the future. Metrolink also coordinates some services with Amtrak, with whom it shares some riders. “We have a program called Rail To Rail, which allows some people who have our monthly passes to ride on certain Amtrak trains,” Leahy notes. “By making the service more coordinated and more convenient, our hope would be that both Amtrak and Metrolink experience strong ridership and revenue development.”

“There’s also a great deal of interest in running some more late night trips,” he continues. “Our services cut off about nine or ten o’clock on some of our lines, and I’d like to run to a later time. Also, on some of our lines, we don’t have much midday service, so the service is fine for somebody working business hours, but if you have to get home early or stay late, it can be inconvenient. We think we’ve got to get it to a point where a person can just use it for any purpose – to get downtown or wherever they want to go.

“In addition, we now have a mobile application for buying tickets; we have optic readers being installed at our stations, so you don’t need a paper ticket, anymore. And we’ve just recently been able to unveil a software package, where a person can identify the exact location of his or her approaching train, so they know how long they’re going to have to wait. We’re trying to make the service easier to use and more convenient for the customer.”

If all goes according to plan, all of Metrolink’s improvements and upgrades should be complete in time for the games of the XXXIV Olympiad, which are scheduled to come to Los Angeles in 2028, while, at the same time, fulfilling SCRRA’s vision: To be Southern California’s preferred transportation system built upon safety, reliability, customer service, leading-edge technology, and seamless connectivity.

WHAT: A regional, commuter rail system in Southern California 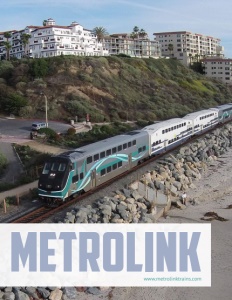