The Homestead-Miami Speedway – A home for race fans

A home for race fans

After Hurricane Andrew decimated the city of Homestead, Florida, some 34 miles southwest of Miami, in August 1992, the Department of Defense decided not to rebuild the heavily damaged Homestead Air Force Base, but rather downgraded it to an Air Reserve base. “So, in one fell swoop, the Department of Defense moved about 13,000 enlisted people and their families out of a community that only had 45,000 residents to begin with,” says Al Garcia, Vice President for Operations at the Homestead-Miami Speedway. 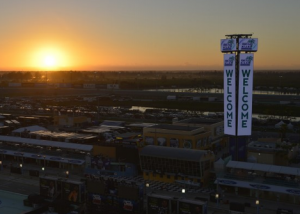 “That meant the loss of 400 civilian and 400 military jobs at the base,” Garcia continues. “To make it right, the Department of Defense gave the City of Homestead a $75 million grant to build themselves an ‘economic generator’ to create jobs, post hurricane. At the time, there was a man named Ralph Sanchez, who had been promoting street races in downtown Miami for about ten years, and he saw the need for a permanent facility because he knew that the downtown was going to be developed and that, one day, it wouldn’t be able to host major league auto racing. And that coincided with the rise of NASCAR. So, he talked to the city fathers and they decided that a speedway was the best thing that they could do to stimulate the economy and create jobs.”

Groundbreaking for the new 434-acre, 46,000-seat facility took place exactly one year after the hurricane hit, and the track opened in November, 1995. The first NASCAR race at the Homestead-Miami Speedway (which was then called the Metro-Dade Motorsports Complex) was won by Dale Jarrett in front of a sold out crowd. In 1999, The International Speedway Corporation (ISC) acquired the management lease of the Speedway, which is still owned by the City of Homestead. The ISC owns and/or operates 13 of the nation’s premier motorsports entertainment facilities, as well as Motor Racing Network, the nation’s largest independent sport radio network, and Americrown Service Corporation, a provider of catering services, and food and beverage concessions.

“The original $75 million barely built the track, and since then, we’ve invested another $150 million,” says Garcia, “putting in a lighting system, building more hospitality areas, doubling the seating capacity, building more media centers, and other infrastructure that was desperately needed.” One major upgrade took place in 2003, when the speedway underwent the most technologically advanced track reconfiguration project in the history of motorsports: a $12 million project that transformed the track from a flat six degrees to a computer-designed 18-to-20-degree variable banking system in the turns.

Today, the Speedway employs 50 full-time workers, and many off-duty firefighters, police, and medical technicians also work at the Speedway, part-time, at any number of the 300 events it hosts, yearly, including the final race of the season in all three of NASCAR’s series: the Monster Energy NASCAR Cup Series, the Xfinity Series, and the Camping World Truck Series, all sponsored by the Ford Motor Company.

“NASCAR drives about 95 percent of the revenue,” Garcia reports.”The rest we do in track rental – that can be a 5K, a triathlon, research and development by the racing industry, film, or amateur races. So, we’re there 300 days a year with a ‘hot track,’ as they say, running something.” 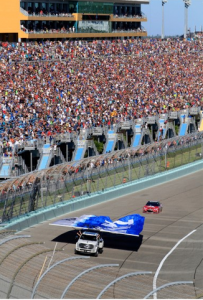 The track’s overall economic impact to the region is estimated to be approximately $320 million a year, proving that Sanchez’s gambit has apparently paid off, handsomely. And while business trailed off, somewhat, during the Great Recession, Garcia says that is has come back and he is “cautiously optimistic,” going forward. “NASCAR fans are extremely loyal and the rank and file show up,” he states. “The events were still a sellout or near sellout. And our race is the championship race – the last race of the season. And it’s a bucket list item that NASCAR fans want to attend.”

Miami is a four-sport town, home to the NBA’s Miami Heat, the NFL’s Miami Dolphins, the MLB’s Miami Marlins, and the NHL’s Panthers – all playing in newer or more newly upgraded venues. “So, we are competing for discretionary dollars from sports fans and event-goers,” Garcia admits. “There are more modern arenas and more amenities elsewhere, but we invest every year to try and catch up. We’ve replaced some of the mechanical systems that have outlasted their useful life. Where we can make a difference is in spending money that touches the masses. For example, this last year we created a new tram plaza and upgraded our tram service. We’re investing heavily in technology and right now we have Wi-Fi over 50 percent of the property with a reliable, strong signal.”

Perhaps more importantly, Garcia stresses the Speedway’s attention to customer service. “We work on being friendly and taking care of our fans,” he declares. “We go to great lengths to educate and train our security officers, our tram drivers, our information booth workers, to make people feel like guests in their own homes. Everybody is going to get a friendly, kind, and warm experience. We want folks to come to the Speedway and feel safe and enjoy themselves. And it’s not uncommon to see three generations – the grandfather, the father, and the son – all attending races together. And there’s camping – we have 5,000 people that stay on property for over a week and 2,000 RVs that stay in the campground from the Monday prior to a race. Those are the kinds of things that create memories that keep the fans coming back.”

Check out this handpicked feature on The Miami Beach Convention Center.

WHO: The Homestead-Miami Speedway

WHAT: A motor racing track 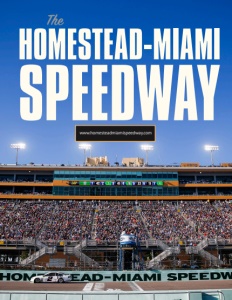