Medford, Oregon, the county seat of Jackson County, is located in the southwestern part of the state near the California border. The city sits in a rain shadow between the Cascade Range and the Siskiyou Mountains called the Rogue Valley. At an elevation of 1,400 feet, it has a mild climate that allows for a long growing season, and, for many years, Medford’s economy was fueled by agriculture – especially pears and wine grapes. The city was originally named in 1883 by David Loring, a civil engineer and right-of-way agent for the Oregon and California Railroad, after his hometown, Medford, Massachusetts.

Medford is the fourth largest city in the state with a population of 79,800. Its main economic drivers, today, are the healthcare industry and tourism. “There are two major hospitals (Asante Rogue Regional Medical Center and Providence Medford Medical Center) and a lot of clinics and surgery centers serving a seven-county area,” says the city’s Public Works Director, Cory Crebbin. As for tourism, skiing, water sports, mountain biking, rafting, and hiking opportunities are abundant in the nearby mountains and Rogue River Valley. “It’s an outdoor paradise,” Crebbin declares. “We have great golf courses and the fishing is amazing – not just the Rogue River for salmon and steelhead, but you can go to Diamond Lake and catch 20-inch trout, or fly-fish in a nearby stream. And, we have a sports park that has a lot of tournaments – tennis, softball, and baseball championships. It’s really an awesome location.”

The city of Medford, and Crebbin’s Public Works Department in particular, is responsible for maintaining over 200 miles of roads and streets with its boundaries, and for the last several years, it has based its maintenance operations on the Life-cycle Cost Analysis (LCCA) method.” Crebbin explains: “About 15 years ago, we came across something that the Federal Highway Administration put together. It was a spreadsheet to determine how much it would cost to cover 50 to 100 years of a project – not just your construction costs, but also maintenance and operations and everything else. We decided to do that for everything. So, now, Medford Public Works operates on what we call the ‘lowest life-cycle cost approach.’”

As an example, Crebbin recounts that, formerly, the department’s road maintenance program, consisting of asphalt overlays, wasn’t keeping up with the demand. “So, we decided to take a lowest life-cycle cost approach and actually measure the condition of all the pavements to decide what’s optimal for the system, so over the life of the transportation system, we’ll spend the least amount of money. We found a company that has a machine called a laser road surface tester. They drive over the streets, and check the roughness and the deflection in the cracking with video and laser and microwaves. They come back every couple of years and drive our streets again, so we can see exactly how fast they’re deteriorating and, based on their score, we can determine what might be the appropriate treatment.”

The outcome of the department’s efforts to save money over time resulted in a completely revamped maintenance program, based on the Federal Highway Administration’s Life-Cycle Cost Analysis in Pavement Design. “We don’t just do overlays, anymore,” Crebbin says. “Now we do a fog seal, which I call ‘sun screen for streets,’ because as asphalt absorbs sunlight, it gets cross-linked and that’s what makes it brittle and crack. The fog seal that we spray on rejuvenates it and keeps it flexible longer.”

“And that delays the next stage of maintenance, which is a slurry seal. It’s like zinc oxide for a street. You put a very thin slurry mixture over the top of the street, which starts blocking the oxidizing rays, and you can limit cracking; you can seal up the cracks to keep the water out. And then the next step, which we just started doing this year, is a chip seal, which is some gravel in a slurry seal type application.

“So, we are delaying having to do overlays probably anywhere from 15 to 20 years, which costs money upfront, because you have to do this additional maintenance, but you save way more money later, so you’re coming out significantly ahead.”

Another project in which Crebbin’s department applied the lowest life-cycle cost approach concerned the city’s wastewater treatment plant. “About six years ago, we came under the temperature standard,” he recounts. “The Rogue River is a salmon stream, and there was about a month during the year where the Department of Environmental Quality said that our temperatures were too high – our discharge would raise the temperature of the river by .18 degrees Celsius, according to the DEQ’s analysis. One alternative was to put in chillers; we didn’t like that idea because the cost was in the neighborhood of $16 million, and we’d only use them for a month, the things use a lot of energy so there’d be a pretty large carbon footprint, and if they break down, we’re in violation of our discharge permit. We looked at chillers, cooling towers, lagoons to store the water for later agricultural re-use – all of them were over $15 million.”

What Medford did, instead, was work with the DEQ and a non-profit company out of Portland called The Freshwater Trust that works with municipalities, utilities, agencies, and private businesses to offset their impacts on rivers and streams, evaluate habitat and water quality conditions, and optimize conservation investments. “They came up with a program where they restore riparian areas (a riparian area is the interface between land and a river or stream) by establishing tree canopies,” Crebbin continues. “They compute how much cooling you get out of trees when they’re grown. So, they do a 20-year conservation easement with the landowners and pay them for it. And the contract price is about $8 million to do all the temperature mitigation that we need done. The other advantages are by restoring that riparian area, not only do you cool the river, but you also create habitat connections, stabilize stream banks, and you get some filtering of agricultural runoff before it hits the stream. So, there are lots of benefits.”

Crebbin maintains that the lowest

lifestyle cost approach results in extremely low utility fees for Medford’s residents. “Because we have no debt, all of the money is going into operations and projects. And, for a typical household, we have a public safety fee, a parks utility fee, a street fee, a stormwater fee, a sewer fee, and a water bill. If you add all those up, it comes out to about $60 a month for a single family house. When you do comparisons, anywhere, even in Oregon, the sewer bill alone is more than $60 a month.”

Other items on Medford’s agenda, according to Crebbin, include an alternative fuel study for the city’s fleet. “It’s predominantly gas and diesel, now, with a couple of compressed natural gas test units on one of our street sweepers,” he says. “We’re also working on an update to the sewer collection system master plan, which is, basically, all the pipes. And that is because we’re going through an urban growth boundary expansion. That application is with the state, right now, and we need the sewer master plan to include all that increased area. We’re also doing a transportation system plan update for the same reason.”

Crebbin also reports that Medford’s downtown continues to experience revitalization, with the addition of new businesses, such as Lithia Motors, the fourth largest automotive retailer in the United States, which built its corporate headquarters there in 2012 and partnered with the city to create The Commons, a downtown development built to provide more parking, recreation, and commerce in the area. “We built a two block park area right next door where the community events happen and, since then, three other corporate entities moved their offices downtown,” he relates. “We’ve reconstructed several of the streets – most of them with bulb-outs at the corners to shorten pedestrian crossings. And we are working on downtown housing strategies. The obstacle is a lot of old buildings – functional buildings that are still operating – but in order to remodel them with any kind of housing, you’d have to do seismic retrofits, which prices downtown housing in existing buildings out of the market. So that is an area the city is working on, as well, recognizing that a lot of people want to live downtown.”

“Also, there are two colleges nearby – Southern Oregon University and Rogue Community College,” Crebbin adds. “Ten years ago, SOU and RCC partnered to build a higher education center in downtown Medford so that students wouldn’t have to commute so far to go to class. Right next door to that, the county built a new library. And there’s a new police station the city just completed a couple of years ago. So, there has been a lot happening downtown and a lot has changed in the last 20 years.”

WHO: Medford, Oregon
WHAT: The fourth largest city in the state – pop. 79,800
WHERE: in the southwestern part of Oregon near the California border
WEBSITE: www.ci.medford.or.us 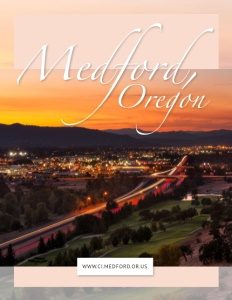