Albany, Oregon – The Hub of the Valley 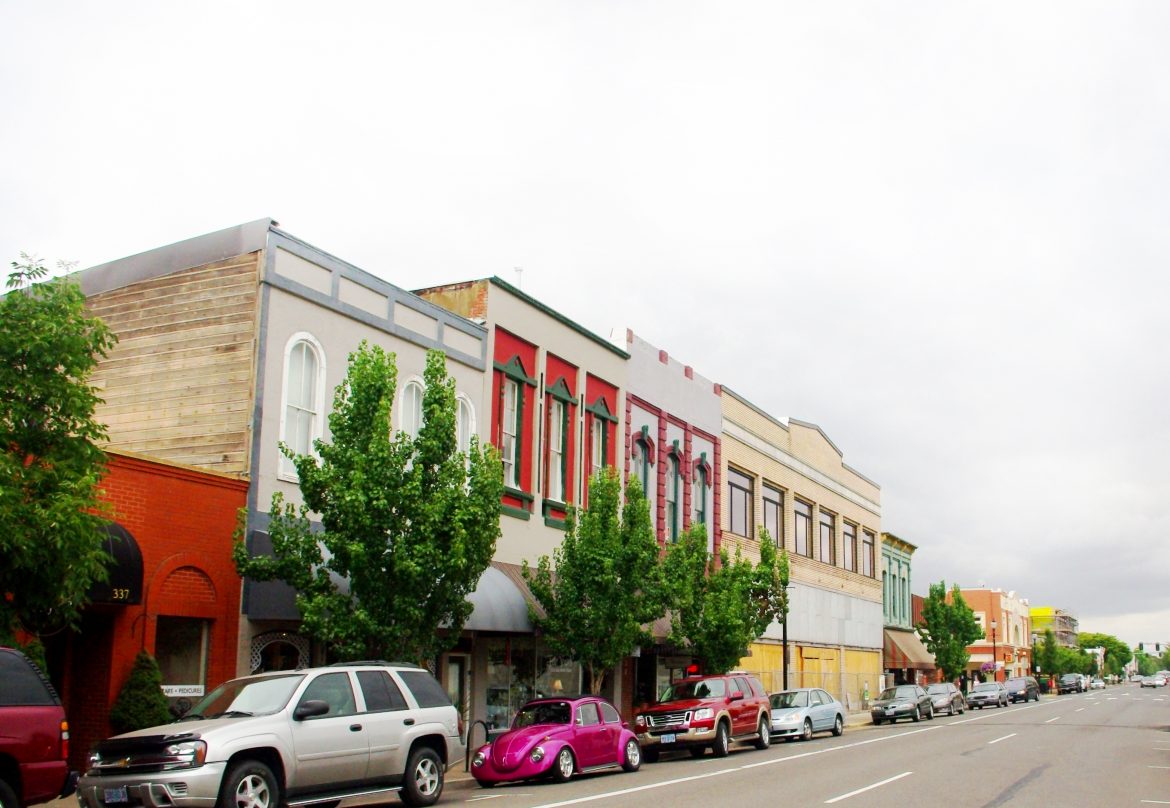 Business View Magazine interviews representatives of Albany, Oregon, as part of our focus on best practices of American cities.

Albany, Oregon, the seat of Linn County and the 11th largest city in the state, is located in the Willamette Valley at the confluence of the Calapooia and Willamette rivers, just east of Corvallis, north of Eugene, and south of Salem and Portland.  Nicknamed the “Hub of the Valley,” Albany is predominantly a farming and manufacturing city settled by European and American pioneers who travelled there via the Oregon Trail.

The first of those settlers, Abner Hackleman, a farmer from Iowa, arrived in 1845.  In 1847, Walter and Thomas Monteith came all the way from their hometown of Albany, New York.  The Hackleman and Monteith families became the town’s most prominent citizens – both built landmark homes that still stand.  In fact, Albany boasts some of the state’s best-preserved late 19th-century residences; more than 700 historic homes and buildings are in four designated historic districts that extend from downtown to residential neighborhoods.

In the 1850s, the California Gold Rush brought economic prosperity to the area.  In 1852, the first steamboat arrived at Albany, and trains passed through, starting in 1871.  In 1872, the Santiam Ditch and Canal Company built a 12-mile canal as a means of transporting goods between the cities of Lebanon and Albany.  Unfortunately, currents proved to be too swift for commerce and the canal became a primary source of water for manufacturing, drinking, and hydropower.  The canal still provides a source of water for one of Albany’s water treatment plants and a refurbished hydroelectric power facility.  Begun in the 1940s, the World Championship Timber Carnival drew competitors from all over the world to participate in logging skills contests.  The event took place over the four days of the Fourth of July weekend.  Men and women would compete in climbing, chopping, bucking, and burling contests.  Unfortunately, in 2001, the Carnival was canceled because of smaller crowds and the state’s declining timber economy.

In 1942, the U.S. Bureau of Mines established the Albany Research Center, now part of the National Energy Technology Laboratory, on the former Albany College campus, focusing on the development of new metallurgical processes and the production of titanium and zirconium.  Today, Albany is known as the “rare metals capital of the world” and “grass seed capital of the world.”  The area also produces corn, beans, mint, strawberries, hazelnuts, cider, beer, and Willamette Valley wines.  OFD Foods is a leading employer in the freeze-dried food industry and the manufacturing sector of the city’s economy, employing over 300 people.

Recently, Business View Magazine spoke with a group of Albany’s officials and learned of four projects currently underway in the city of 52,710:  a new police station, a new fire station, an $8 million urban renewal streetscape project downtown, and a unique addition to the city’s character — the Historic Carousel & Museum.

“In 2002, the community became interested in building a hand-carved carousel that was similar to the ones then-recently completed in Missoula, Montana, and Salem, Oregon,” says Nathan Reid, Albany’s Urban Renewal Officer. The Albany carousel, which was completed and opened for business in August 2017, was primarily funded and managed through a private nonprofit group created to raise funds and recruit and manage volunteers.  The Central Albany Revitalization Area (CARA) provided part of that funding.  CARA is an urban renewal district that was established in 2001 with the goal of increasing economic vitality in Albany’s downtown core while encouraging the use of vacant and underused land and buildings, rehabilitating existing structures, and increasing local property values.

The Historic Carousel & Museum is a private 501(c)(3) organization with over 200 active volunteers who donated 150,000 hours to the creation of the city’s brand new, 52-animal amenity built around a revamped 1909 carousel mechanism donated by the family of Gustav Dentzel, a pioneer of carousel building in North America.  “This organization has over $5.2 million in donations pledged, and construction costs were about $5.6 million,” Reid reports.  The Carousel is open five days a week; from its opening in August through late November, more than 58,000 had taken rides and more than 70,000 people had visited.  “It’s had a significant and immediate impact on the community at about two bucks a ride,” said Ed Hodney, Parks & Recreation Director and interim Urban Renewal Director.  “The downtown area is a relatively small geographic area that’s about eight to ten blocks long and about an equal number of blocks in the other direction.  The Carousel building sits on the northwest corner of that downtown space and is one of the anchors for business activity in the downtown area.”

“The Streetscape Project is another one that was funded by CARA in 2016,” says Staci Belcastro, City Engineer.  Albany’s Downtown Streetscape Improvements Project includes new sidewalks and curb ramps, new water lines, decorative street lighting, street trees, new road pavement, stormwater-quality planters, and new street furniture.  “We constructed it in two phases,” Belcastro continues.  “One phase was around our post office to support the Carousel, and that phase was completed this past spring.  Currently, we are constructing the second phase of the streetscape project and anticipate that it will be finalized in the spring of 2018.”

In addition to helping attract new private investment to downtown while enhancing the value of existing private and public investment in the area, the Streetscape Project’s additional objectives include:  providing a safe and convenient transportation network that encourages pedestrian and bicycle access to and within the town center; creating a readily identifiable urban core that is unique and vibrant with a mixture of entertainment, housing, specialty shops, offices, and other commercial uses; increasing residential density while encouraging the development of new forms of housing and home ownership; and protecting the environmental values of waterway corridors in the area.

Fire Chief John Bradner says that the City identified the need to replace its main, downtown fire station many years ago. “We’ve got four fire stations in the town and our main downtown station was our administrative station up until the 1990s,” Bradner said. Support and administrative staff moved to other locations then due to limited space at the main station.  Bradner adds that the 67-year-old Station 11 was not seismically sound, nor did it have adequate emergency power.  The old station was built in 1949, before construction design criteria strongly considered the potential for earthquakes.  One quarter of Albany’s emergency response forces worked from that station, causing concern for the department and the community.

“In addition, the old building was inadequately connected to emergency power,” Bradner said.  Retrofitting would have been extensive and expensive.  “The goal was to create a new building that could be sustainable for at least another 60 years, if not 75 to 100 years, and to create a station that met all of our needs.” The modern, 25,000-square-foot facility, replacing the old 15,000-square-foot station that was demolished in the summer of 2016, opened in October 2017.  “We brought back all of our administrative and support services and the Life Safety Division together with one quarter of our emergency response force,” says Bradner.

“As early as 2002, there was a need established for a new police station; the current facility is way too small,” says Police Chief Mario Lattanzio.  “One of the things that happened is Albany annexed North Albany, which added 6,000 new residents.  When that occurred, we already were maxed out.  So, for the last 15 years, they’ve been working on trying to come up with a way to replace the police station and the downtown fire station.  In 2009, the City purchased about 3.69 acres for a future spot for the police station, but didn’t have the funding, at that time, to build it.”

The City asked local voters for funding to build both public safety buildings in 2013, but the measure failed.  The City Council then pulled together a committee of Albany residents, businesses, and political leaders to review the facility needs of the police and fire departments.  The committee proposed a funding package, and architects produced preliminary drawings of how new buildings might look.  A new measure went back to voters in May 2015 and passed.

The new police facility is designed for 20-year growth and a 50-year build-out.  At 40,000 square feet, it is nearly four times the size of the building it replaces.  Police personnel moved into the new building in December.  Total construction costs for both new buildings came to $26,288,500, $18 million of which comes from Albany taxpayers through general obligation bonds.

The Carousel and the new fire station anchor opposite corners of Albany’s historic downtown, connected by the Streetscape Improvements Project.  Combined with the opening of the new police station, the transformation of Albany, Oregon, is right on track.  “It’s going to be pretty impressive once it’s all done,” says Jeff Blaine, the City’s Public Works Engineering & Community Development Director.  Pretty impressive, indeed.

WHO: Albany, Oregon
WHAT: A city of 52,000
WHERE: In the Willamette Valley at the confluence of the Calapooia and Willamette Rivers
WEBSITE: www.cityofalbany.net

Bristol, Virginia – on the border of... 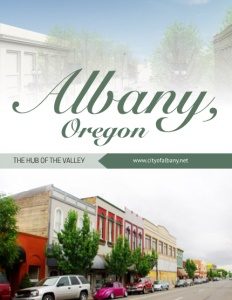