Rising from the ashes

Business View Magazine profiles Phenix City, Alabama, a city of 33,000, located in eastern Alabama on the banks of the Chattahoochee River.

The cities of Phenix City, Alabama, and Columbus, Georgia, sit on opposite sides of the Chattahoochee River, which forms the southern border between the two states. Today, these two metropolises share a common desire to grow and prosper as family-oriented, forward-looking jurisdictions that also hope to become the nexus of a well-visited tourist mecca. But that has not always been the case.

In fact, for many years, the relationship between the two towns more or less resembled that of Chicago and Cicero, Illinois during the Roaring Twenties. While Columbus had the more legitimate industries – it was always a center of cotton transport and textile manufacturing, as well as being the home of the U.S. Army’s Fort Benning installation – Phenix City, had the Mob. “Our industry was gambling, running booze, and prostitution,” says Phenix City’s current Economic Development Manager, Shaun Culligan. “And with Fort Benning being so close, the Mob began to run the community. They would take advantage of the fact that there were trainees and soldiers coming in on a consistent basis and they had time off, so they would come here. If they won, some money might be taken back; but for the most part, the dice were loaded and the machines were fixed, so they didn’t win all that often. We’ve had an extremely checkered past.”

In those days, crime bosses ran the town, and some of the local authorities rationalized the city’s widespread corruption as being a necessary revenue producer in the absence of other businesses. Meanwhile, from time to time, some concerned citizens tried to fight back – often meeting with violent resistance from the gambling interests. For example, Hugh Bentley, a local businessman and Sunday school teacher, organized a group to clean up the city and had his house bombed as a result. A local attorney, Albert Patterson, who had moved to Phenix City in 1933, and who ran for the State Attorney General’s office in 1954 with a pledge to clean up the town, was assassinated outside his law office after winning the Democratic primary.

In response to Patterson’s murder, Alabama’s Governor, Seth Gordon Persons, placed the town under martial law and National Guardsmen performed around-the-clock raids on nightclubs, warehouses, and gambling halls. Fort Benning declared Phenix City off limits to its soldiers. When Albert Patterson’s son, John, ran for, and won, the position of State Attorney General in 1955, he prosecuted those who were responsible for his father’s murder and by the end of the year, the town was rid of all organized crime and vice.

After the city’s rehabilitation, Look Magazine named Phenix City as an All-America City in 1955, and in 2007, Businessweek named it the nation’s Best Affordable Suburb for raising a family. “We finally reached a new era and we decided that we needed to spend a lot more money in reinvesting and rebuilding our downtown, rebuilding our image, and increasing our efforts in tourism,” says Culligan. And that’s when Phenix City, with help from its sister city across the Chattahoochee, decided to move ahead on an innovative project that was 30 years in the making and what ultimately became the largest urban whitewater course in North America. “It was one of those pie-in-the-sky dreams that finally came true,” says Culligan.

The Chattahoochee River Whitewater course opened in May, 2013 at cost of $32 million. The 2.5 mile course has Class II – Class IV+ rapids and was recently named one of the “Top 12 Greatest Man-made Adventures on the Planet” by USA Today. The team that developed it was the same one that constructed the kayak course on the Upper Ocoee River for the 1996 Summer Olympics. In order to get the Chattahoochee ready for the project, two upriver dams owned by Georgia Power and Alabama Power, but were no longer producing electricity, had to be removed. Once they were torn out, and the natural flow of the river returned, the design team modeled the riverbed in an indoor facility so that they would know exactly how to structure the course to make the water flow correctly.

“Then they went in and diverted the water and constructed the bottom parts of the riverbed,” says Culligan; and always with an eye to safety. “A lot of rapids create what they call a ‘recycling rapid,’ which when somebody falls out into the water, it traps them in that rapid and they’re not able to get out. Now the riverbed’s been constructed in certain parts to push them through the rapids, so if they fall out of the boat, it will spit them right through the rapids. It makes it a really safe course.” When a dam further upstream releases more water, the higher flow increases the river’s speed, as well as the course’s difficulty. At times of low flow, the river calms down and less experienced or adventurous rafters can navigate it at a more leisurely pace.

“You start at one of the most northern points of the city and you take the Chattahoochee River completely through downtown Phenix City and Uptown Columbus – which is what they call their downtown,” Culligan says. “It’s got multiple rapids; some are as wild as Colorado. But it’s as warm as Costa Rica with a temperature where you can raft it year ‘round.”

Culligan says that the city is relying on the whitewater course, some zip line attractions going across the river, as well as plans for some urban campgrounds alongside it, as a way to draw more tourists to the area. So, far, it seems to be working. “We’re not reaching millions and millions of people yet,” he admits. “It’s still new and, quite frankly, the majority of the people in the State of Alabama are still unaware, so we’re doing our best to market it just in our own state. But, in three years, we’ve exceeded a hundred thousand people on the river. It continues to grow. Each year, the number has doubled as far as participants are concerned.”

Meanwhile Phenix City is also working on developing both the area along the river as well as its nearby downtown core. Currently, there is $40-50 million worth of construction underway on the riverfront, including a new Troy University campus, a new Courtyard Marriott Hotel and Conference Center, and a renovated and redeveloped shopping center and parking garage. The 14th St. Bridge, over the Chattahoochee, has been transformed into a pedestrian bridge at a cost of $6 million. The Phenix City Riverwalk is a 1.21 mile structure on the western bank of the river that connects the city with Columbus’ Riverwalk on the other side and also hosts the 3,000-seat Phenix City Amphitheater.

Culligan points to the available acreage on its side of the river as prime territory for further development. “Columbus is pretty much built out in their downtown, but we have, for lack of a better word, a virgin riverfront. We’ve got a lot of opportunities – a blank canvas and we can begin to paint it,” he says. Indeed, the city’s Downtown Development Plan proposes a mixed-use district that will combine urban living with public gathering places and neighborhood-focused retail. “Our downtown has been, for some time, in need of renovation,” he adds. “Now, everybody wants to be on the river. I can certainly see a significant amount of boutique shops and coffee shops. And the brewing industry in the State of Alabama is beginning to increase, so I can definitely see pubs and craft brewers and the things that Millennials want. We want to create a sense of place in downtown so people can come downtown and have everything they need without having to get back in their car.”

Having long shed its moniker as Alabama’s “Sin City,” Culligan believes that the new Phenix City is poised to resurrect itself just as the mythical phoenix bird obtained new life by arising from the ashes of its predecessor. “We’re in an extremely active transitional period,” he says, enthusiastically. “We’ve been given an opportunity right now, because of a lot of the development that’s been taking place. This period of time is an opportunity that we want to make sure we’re taking advantage of. We’ve got to make sure that we are producing a product that people want. It’s an exciting time because we can begin to paint our own picture and have something the city has never had before. It’s been a big focus over the last couple of years, and we’re starting to reap that benefit, now.”

Check out this handpicked feature on Campbell River, British Columbia – An economic renaissance.

WHERE: : Located in eastern Alabama on the banks of the Chattahoochee River 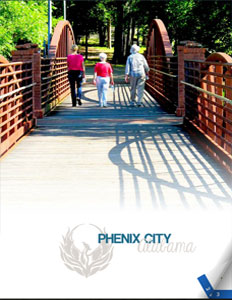