Business View Magazine interviews representatives from Ennis, TX, as part of our focus on best practices of American cities.

Ennis, Texas, population 19,300, is a city in located 35 miles south of Dallas in eastern Ellis County. The area that would later become Ennis was first inhabited by the Tonkawa Native Americans, and used by several other tribes as hunting grounds. Anglo pioneers arrived in the early-to-mid 19th century, and when Ellis County was established and organized in 1850, the area was sparsely inhabited by isolated farmsteads. In 1871, the Houston and Texas Central Railroad purchased 647 acres of land in Ellis County at a price of $5.00 per acre, establishing the line’s northern terminus. On June 8, 1872 this site was established as the City of Ennis. The namesake of the town was Cornelius Ennis, an official of the Railroad.

Over the next several decades, Ennis became a significant center of trade and cotton farming. By 1920, a total of 152,601 bales of cotton were ginned and shipped from Ellis County, the most of any county in America. The Ennis Chamber of Commerce adopted the slogan “Where Railroads and Cotton Fields Meet.” These two industries – trade and cotton production – produced immense wealth for the community, which could be seen in the residential development of the city. Lawyers, doctors, businessmen, and other wealthy residents built elegant houses in the northwestern part of the city, which would eventually become a part of the Templeton-McCanless Residential Historic District.

Today, Ennis serves as a manufacturing hub, a tourist destination, and a bedroom community serving the greater Dallas-Fort Worth Metroplex. “We are on the fringes of the DFW area in north Texas, which is adding more people every day than any other state in the U.S. right now,” states City Manager, Scott Dixon. “Ennis finds itself right in the transportation triangle that connects Dallas to San Antonio to Houston and back up to Dallas, and Ennis is right inside of that triangle. It’s bordered by a lot of highways. We’ve got a 287 bypass, which comes on our southern side and I-45 runs north and south on our eastern side. So, there are a lot of folks moving right around the edges of our city, and we are experiencing around a four or five percent growth, right now. We expect that we’ll see upwards of nine or ten percent growth within the next two years.”

“We have a very mixed industrial base,” Dixon continues. “It’s not just one type of industry. That’s been a real blessing to Ennis; we have not suffered during these major economic downturns over the last twenty, thirty years. Ennis has plugged along and that’s because our industrial base is very mixed. We have manufacturers that make mattresses, plastic totes, shingles; we have folks that provide the steel for buildings.”

In May, 2013, Ennis was hit by an EF1 tornado. The damage impacted homes in the Historic District and many other businesses in town, with some of the downtown buildings facing demolition. However, their destruction was opposed by local community leaders and activists. As a result, these damaged structures were sold by the city to developers with the intention of repairing and revitalizing them.

“The City of Ennis has made a concerted effort to reinvest in its downtown to try and bring back some economic vitality,” explains Dixon. “We’ve been hard at work creating a public/private partnership to incentivize investment in these old buildings and, thus far, we have over two dozen projects, where people have invested. It’s all in the Downtown Master Plan that was developed in 2016-17. The city has invested roughly $6-7 million in matching grants that have gone to these private developers, who, through acquisition and investment, have already invested close to $20 million of their own money. So, it’s about a three or four-to-one match, private to public dollars. We’re very excited about that and, obviously, the dream is that there’ll be a lot more to come with our Downtown Plan.”

“The biggest story is that the city has invested about $7 million redoing all of the underground infrastructure in the historic, eight-block downtown,” Dixon continues. “We needed to replace all of the old water and sewer and stormwater pipes that were undersized or decrepit. And, we’ve done that – all of the underground work is now complete and it will be topped with a brand new, beautiful, pedestrian-centric streetscape with mature trees and turn-of-the-century type lampposts. It will be a beautiful, finished product.”

In addition, Dixon reports that the City recently created a new, unified development ordinance that will allow more housing options, such as loft apartments, to be created and leased in the downtown district. Another part of Ennis’ downtown revitalization is the planned construction of a new east/west connector with an underpass that will go beneath the railroad line. “The railroad is the reason Ennis is what, and where, it is, today,” Dixon notes. “However, now, it’s kind of a barrier for shoppers and others to connect from I-45 to downtown Ennis. So, we’re going to invest, collectively, with our North Central Texas Council of Governments and the state. Once we finish all three phases, it will be, roughly, a hundred- million- dollar project.”

Another planned project for Ennis concerns the replacement of all the town’s water meters with new, “green” meters. “That’s going to help in a bunch of different ways,” Dixon avers. “For one, it’s going to transmit the information electronically, so it reduces the miles driven to check those meters. Also, it tells us much more accurately how much water is being used. That cuts down on our water loss. In addition, it pushes a report to the end user and the city, when there appears to be a leak, or when there’s high usage that’s unexplained. All of those things, we think, are big positives as far as conservation of water and the protection of our environment.”

Ennis also has instituted a Parks Master Plan, “It has green trails and bike trails that will connect all of our parks,” says Dixon. “We’re blessed to have over 200 acres of parkland, but a lot of those are visited by cars, only. They have beautiful trails, once you get to them. So, we’re in the process of linking all of those parks with pedestrian and bike trails that will allow people to have greater access to our outdoor spaces.”

“We want to be known as that ‘City of Choice,’ that provides a robust economy, housing, and family values – all the things that we feel have created our community,” says Mayor Angeline Juenemann. “We are a city that has a very authentic, small town charm, but one that understands that change is necessary. So, we want to keep the culture that we have, but we also want to improve and give everything that we possibly can to our citizens, now, and to those who may join us in the future. We want to attract our younger people who have been raised here and went to college, to come back and bring their families. We also want to bring jobs and opportunities in new sectors of the market for our younger people. That’s very important to our community.”

“About a quarter of our population is over the age of 65; another quarter of our population are just starting a family,” Dixon adds. “So, security and safety are very important. In addition to investing in parks and quality of life, we are also investing in our fire and police. We just created a new fire station and hired 16 additional firefighters. We had a 2-rating – one of only a hundred cities in the United States to have a 2-rating from the NFPA (National Fire Protection Association). That’s a very big thing for us and we are well on our way to getting a 1. That would put us in a very select group, indeed, as being a place that is one of the safest places to live from a fire-safety standpoint. In addition to that, we’re investing in a 35,000-sq.-ft. public safety facility that is, right now, being bid out. It will be under construction within the next few months and will be completed within the next year and a half. Those are the types of investments the city is making into the quality of life side of things.”

Ashley Colunga, Ennis’ Marketing Director, says she has spent the better part of last year focusing on a rebranding campaign whose aim is to better tell the story of the city’s revitalization efforts, and why people should move there. “We worked to market ourselves in a way that people could see all of these initiatives,” she explains. “What we talk about is we are a growing and progressive city moving forward, but staying true to who we are, because we do want those people who left here, and are ready to come back, to be close to friends and family and feel like they belong somewhere. A lot of people, especially Millennials, are looking for something authentic and I think our brand ties into that, perfectly.”

“Through our rebranding efforts, we identified our downtown as the heart of our city and the heart of our storytelling,” Colunga adds. “The first thing that we want to let people know is that we are investing in our downtown; it’s going to be completely revitalized, but still maintain its charm. It’s going to be turned into an experiential downtown; people can come and shop and dine and go to the theater or the pub, or just stroll around, similar to what you can do in other charming downtowns.

“And we’re starting to elevate our marketing to the next level and reaching out to people outside the City. Mainly we’ve been focusing on promoting our festivals and events. Most people who come and visit, and end up moving here, is because they went to our National Polka Festival, or our Bluebonnet Trail Festival, and we see our festivals as our ‘curb appeal,’ if you will. We have the largest density of bluebonnets in the United States, and during the month of April, we receive between 20 and 30,000 people here to see our bluebonnets. They come from all over the world and all over the nation. Our Welcome Center is also downtown. As people are coming to visit, that’s usually the first place they stop. The Welcome Center that we’re operating out of right now is quite small and quite old. With a new, $4 million dollar Welcome Center, we will have this beautiful entryway into the City.

“In addition to downtown, we have a Buc-ee’s Travel Center that just had a groundbreaking ceremony, so we also see a ton of new businesses starting to come in on our highway corridor. We’re going to start receiving more highway traffic and more visibility for Ennis, in general. As that new travel center comes in, we’re already starting to see new development – fast food restaurants, potentially a hotel, and that’s just the tip of the iceberg of development at our I-45 area. So, even though we focus a lot of our efforts on downtown, there’s really development going on throughout the entire city.”

Check out this handpicked feature on the Municipal Association of South Carolina.

WHERE: In eastern Ellis County, 35 miles south of Dallas 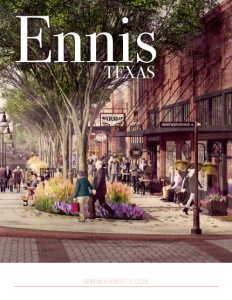