Hundreds of years before settlers arrived, the land now known as the City of Wetaskiwin was home to the Plains Cree peoples. Legend has it, that a peace pipe was smoked there “accidentally,” by two young Chiefs whose tribes were at war, making it compulsory upon them to fight no more and become friends. Thus, the name “Wetaskiwin” (wītaskiwinihk) is Cree for “the hills where peace was made.”

Situated approximately 43 miles south of the provincial capital of Edmonton, Wetaskiwin is one of Alberta’s oldest cities. At one time, it served as a stage coach stop between Edmonton and Calgary, some 150 miles to the south. It became a whistle stop known as Siding 16 in 1890, when the Calgary and Edmonton Railway was built. Founded in 1892, the community grew quickly to become a town in 1902 and a city in 1906.

Today, with a population of approximately 13,000, Wetaskiwin, Alberta is a growing community set amidst some of central Alberta’s richest agricultural lands. A very active CP Rail freight line runs directly through the city, and Highway 2, the second busiest highway in Canada, is only nine miles away, making Wetaskiwin, Alberta an attractive location for business and economic development. 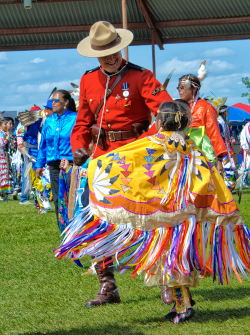 The task of attracting new business, while taking care of the ones that already exist in Wetaskiwin, Alberta, is the responsibility of the city’s newly formed Community Development Department, which has combined and synergized the functions of economic development, communications, tourism, marketing, and events under one municipal umbrella. “Those are our five pillars,” says Jennifer Fossen, Community Development Manager. “That way, we can look at a balanced approach to the social, economic, and environmental sides of how we see development for the city.” The Department’s mandate is to help “build a safe, strong, and proud community by informing, engaging, and leading citizens, community groups, tourists, businesses, and developers on activities and attractions of the City.”

Regarding events, Fossen says that they are all community-driven, “from Canada Day, to outdoor movies, to Alberta Culture Days,” and are designed to get people out and together, while fostering a sense of community pride. She adds that events are also utilized as an economic driver to bring new people, and their money, into the community. “The average dollar goes around the community six times.”

Regarding tourism, Fossen points to several “tourism anchors within the city. We have the Reynolds Alberta Museum, which brings in 50,000 people every year into Wetaskiwin,” she reports. “Having a provincial museum located within a community of 13,000 people is a huge success for us.” The Museum houses antique aircraft, automobiles, equipment, motorcycles, and recently received approval from the province for a $40 million expansion. The Canadian Aviation Hall of Fame draws people from across Canada and beyond. “We also have the Edmonton International Raceway,” Fossen adds, “so there’s always something to do during the summer.”

Regarding communications, Fossen explains, “We make sure that we are being transparent and our residents know what’s going on in the city. If they know what’s going on, they’re engaged. We do a lot of public engagement and surveys; we want to know what our residents want and where they see us growing. We’re not only measuring job growth and building permit numbers, we’re also measuring pride in the community – how many people are saying great things about the community, how many local investors want to take their hard-earned money and put it back into Wetaskiwin, Alberta.”

The fourth pillar is marketing, and Fossen says the city has lately become “quite aggressive in our marketing. In fact, we just won a national award.” That award was for Wetaskiwin’s “Imagination Tourism” marketing ad at this year’s Economic Developers Association of Canada (EDAC) Conference, held this past September. In addition, with some funding from the province, the city recently created a new marketing campaign called “Wetaskiwin is Working,” a multifaceted branding program designed to raise the profile of, and unify, the many economic development initiatives of the Community Development Department.

Finally, there is economic development, where Fossen says the focus, right now, is on small businesses. “We’re being cheerleaders for our business community,” she asserts. “We are always willing to think outside of the box; we’re creative when a business comes to us; we look to find a way to get to that ‘yes.’ We have a turnaround time of four to six weeks for permits, whereas in Edmonton, it’s nine months to a year. Our council might even call a special council meeting if we need to get something done, sooner. We work with our developers and investors through the entire process. So, if they come across any challenges getting their project into the ground – sometimes it’s overwhelming going through the municipal maze – we make sure we help them every step of the way.”

The city also works as a catalyst and networking facilitator. “We bring different groups together,” Fossen continues, “like the Wetaskiwin Women in Networking, which is all female entrepreneurs and business managers. We’ve also started something called the Business Breakfast Club, where we bring in speakers and businesses network with one another. We just completed hundred business surveys this year, and have worked with a company called MDB Insight in Ontario (a management consulting firm specializing in economic, cultural, and workforce development.) In that way, we have evidenced-based research into what our business community wants, what their priorities are, what they’re seeing as challenges, and how the city can work with them. Then, we do something called Business Triage. We go to the ones that are having challenges and they need somebody to assist them. We also look at the ones where, from the survey information, they’re looking to expand and they need help on how to get there. Sometimes a business needs a confidential sounding board and we’re there for them. The city started another project, this year, where we have small business matching grants for storefront improvement, marketing, professional development, and equipment and technology.”

Another major component of Wetaskiwin, Alberta’s economic development agenda is the industrial park located in the southeast part of the city. “The Southeast Industrial Park is something that the city is quite proud of because it is so competitive,” says Fossen. “Council has priced it to sell, so that entrepreneurs can afford it; they don’t have to go into huge amounts of debt to expand, or grow, or start a new business. Pricing begins at $265,000 per acre, fully-serviced, with no offsite levies. So, we are well below competitive rates and half the price of lots in Edmonton. And we have flexible lot sizes which are zoned for light industrial and heavy industrial. So, for Wetaskiwin, this is a huge win for us, having industrial land so close to Edmonton, and so close to the Queen Elizabeth Highway and the Edmonton International Airport. It’s an amazing opportunity for businesses.”

“Wetaskiwin, Alberta is starting to grow,” Fossen says, in conclusion. “It’s kind of been in this bubble for the last ten years – Alberta’s best kept secret. So, the city is upgrading its infrastructure; in the next three to five years, we are going to be spending a large amount of capital budget dollars, so that we’re ready for the growth that we are projecting.”

Check out this handpicked feature on Bay County, Florida – Beaches and more.

WHERE: 45 minutes from Edmonton, AB 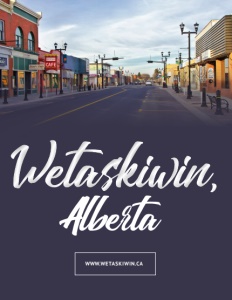