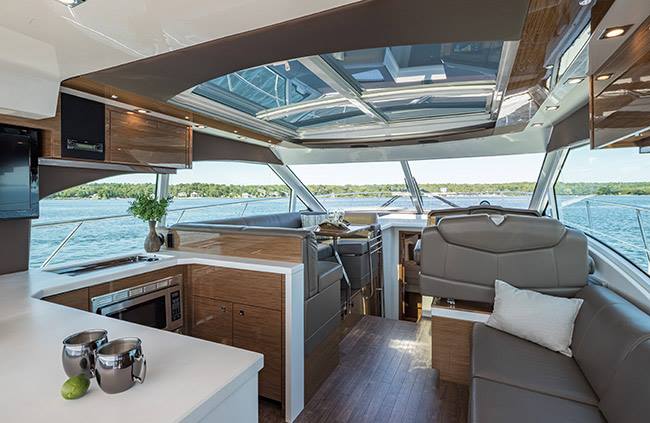 SkipperBud’s was founded by Bud Pretasky in 1959, in La Crosse, Wisconsin. “It was a small marina with a dry stack, selling small fishing boats with outboard engines, and slowly expanded from there,” says the company’s current President, Mike Pretasky Jr., who took over the family business about ten years ago, from brothers Bud, Dave, and Mike.

Today, SkipperBud’s has expanded far beyond what Bud Pretasky may have ever imagined over a half century ago. The company has 14 sales/service/storage locations in four states – Wisconsin, Illinois, Ohio, and Michigan; two marina-only locations on Sturgeon Bay, Wisconsin; approximately 330 employees; and $145,000,000 in 2016 boat sales. It also has a sister company called Silver Seas, with four locations on the west coast of the U.S. – San Diego, Newport Beach, and Sausalito, California, and Seattle, Washington.

“Our structure is to be an all-around boat dealer; somebody who can handle small boats up to large yachts,” says Pretasky. “We’re also very big in the service area, storage, and parts business. A lot of boat dealers, it’s all about boat sales; we look at every area, we do everything. We have people who specialize in small boats; we have people who specialize in large boats; we can paint and deliver a 70-foot boat or we can deliver a 16-foot fishing boat. All our employees are trained in different ways and we want to be the one-stop-shop for everybody, whether it’s selling a boat, financing a boat, storing a boat, slipping a boat, dry stack service – we want to be the all-around person because people that buy fishing boats or a tow boat or ski boat today, when they get to retirement age, they might want to buy something to cruise around the world in. So, our biggest thing is we want to be able to service any type of boater.”

In order to make good on that objective, SkipperBud’s customers can choose their new or used watercraft from any one of the following manufacturers: Sea Ray, Tige, Four Winns, Starcraft, Sylvan, Harris, Smokercraft, Tiara, Crusiers Yachts, Bayliner, Heyday, Scout Boats, Alumacraft, Yamaha, Axis, MasterCraft, Crest, Malibu, Riva, Starweld, Glaston, Ferreti, Scarab, and Meridian. And those companies like selling through their long-time dealer. “I have great relationships with my manufacturers,” Pretasky asserts. “A lot of them I’ve had for many, many, many years. And dealing with the same people makes for a strong team.”

In addition to its wide selection of boats, Pretasky believes that another factor that differentiates SkipperBud’s from the competition is its competent staff. “I have outstanding employees that typically have grown up through the SkipperBud’s family,” he says. “And we pay attention to the training of our employees so they get better at what they do so everybody can be successful. We’re pretty proud about being a family company of our size. Our competition likes to tell everybody how big and bad we are, but when it comes down to it, we’re just like them, but a little bit more organized.”

Going forward, Pretasky says that SkipperBud’s is looking to expand geographically – both in the Midwest, as well as on the west coast, but only if the expansion fits into its current business model. “We’re not going to do a boat sales only location or a boat sales and service location,” he explains. “We have to have a marina; the whole storage, slip, dry stack, service, parts, and boat sales has to be something or we don’t go after it anymore.” Prime targets for any new acquisitions are family-owned businesses. “A lot of marinas are owned by families and that group of ownership is aging – the family and the marina. And to invest in redoing the marina is a huge cost, so a lot of times, a family will choose to sell, rather than invest millions of dollars.”

Although SkipperBud’s may have grown from a small, family-owned boat business into a multi-state enterprise that sells and services thousands of boats a year, Pretasky stresses that its focus has always been on serving its most important customer – other American families. “Boating is family-oriented; it’s a family purchase; it’s a family event,” he declares. “If your car breaks down and your dealer gives you another car while fixing yours, it’s not a big deal. But if your boat’s broken for the weekend and your family was planning on going out and spending the day, that’s a big emotional issue. You’re messing with family time.”

And that’s something that the SkipperBud’s family never wants to do.

WHO: SkipperBud’s
WHAT: A family-owned boat dealer
WHERE: Headquarters in Winthrop Harbor, Illinois
WEBSITE: www.skipperbuds.com

Cruisers Yachts – Cruiser Yachts, a brand of pleasure boats, that today is owned by KCS International, was originally founded in 1953 in Oconto, Wisconsin by Ray, Glenn, brothers Roy and Grant, and brothers Bob and Ted Thompson. They were second-generation members of the Thompson family, involved in boat building at Peshtigo, Wisconsin and Cortland, New York. Roy and Grant were following in their father Chris’s footsteps, who had co-founded the Thompson Bros. Boat Mfg. Company in 1904.

In the first year of operation, Cruisers constructed 14 and 16 foot lapstrake boats, and sold them to the Thompson Bros. Boat Mfg Co. with the Thompson name badge on the hulls. The first cabin-cruiser model was a 19-foot-3-inch lapstrake boat, which was introduced at the 1954 New York Boat Show; it featured a sink, alcohol stove, water closet, cushioned bunks to sleep four, cabin lights, and a collapsible table.

In 1965, the company’s wood boats were replaced with fiberglass as the new technology was wreaking havoc with the wood boat business. Today, the company builds express cruiser and flybridge style yachts, and has recently introduced new models that fit into the new sport coupe class of express boat. Cruiser Yachts currently employs approximately 1,000 people, with an annual sales figure exceeding $94 million. – www.cruisersyachts.com 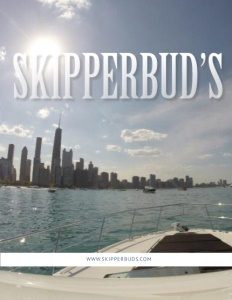