Clarington is a lower-tier municipality in the Regional Municipality of Durham in Ontario, at the eastern end of the Greater Toronto Hamilton Area (GTHA). The municipality consists of urban communities, including Bowmanville (home of the municipal offices), Courtice, Newcastle, Orono, and several rural hamlets. That’s the more formal description. At the other end of the spectrum – from apple blossoms to medical isotopes, salmon to cannabis – the Municipality of Clarington is evolving as a haven of economic diversity. Add in the pleasures of Lake Ontario vistas and the spectacular Oak Ridges Moraine, and there is no wonder that businesses, tourists, and residents, alike, are besotted.

Encompassing a total area of 236 square miles, Clarington has a large cache of developable land. Housing prices and taxes are among the most affordable in the GTA (Greater Toronto Area). The population sits just shy of 100,000, with a steady influx of more people moving into the area. Half of all development in the Durham Region has been happening between Oshawa and Clarington; an average 8.8 percent annual growth over the last five years. 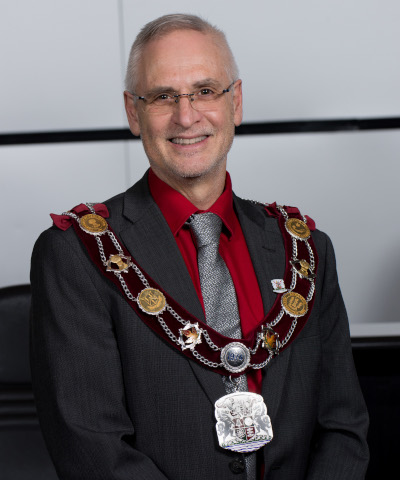 The economy is growing on several fronts, and there is much news to share. Adrian Foster, now in his third term as Mayor of Clarington, reports, “We’ve got a cluster of cannabis growers here, including Starseed, Canopy Growth Corporation, and MediWanna (all licensed producers) and five more applications for new producers coming. In a couple of years, it may quite possibly be our second largest employer. And that business, of course, is absolutely booming.” In January 2019, Clarington Council voted 4-3 to opt in and allow privately-owned cannabis retail stores to operate within its limits. The Municipality has advised the Alcohol and Gaming Commission of Ontario (AGCO) of its decision and will be eligible to host, potentially, one of six stores slated to open within the GTA.

By opting in, Clarington will receive $86,782 to help with the cost of legalization, including enforcement. The Municipality may also be eligible to receive more money from the Province. Ontario has promised to, potentially, share 50 per cent of the federal cannabis excise tax with municipalities if it receives more than $100 million in the first two years. Initially, 25 stores will be allowed to open in Ontario, and one of the businesses that won the provincial lottery can choose the community as a potential location for its cannabis store. According to Foster, “For whatever reason, the people who were opposed to the stores, were very welcoming of the cannabis industry. And we’ll continue to reach out for opportunities – perhaps, there is a supply side to the business that makes sense to bring to town while we have a number of producers.”

Sheila Hall, Executive Director of the Clarington Board of Trade, is aptly referred to by the Mayor as “our economic development guru.” In that role, Hall sees the direct impact of the cannabis industry on the community from a development perspective. “Canopy and MediWanna both repurposed old buildings for their initial operations but, moving forward, most of the facilities will be new builds. They’re clustering in one area and we’re running out of space. They’ve gobbled a lot of it up, quite honestly.” The Mayor adds, “We provided servicing to some lands a couple of years ago, and these guys, basically, took it all. So, the money we put into upfronting the infrastructure has all come back to us in jobs and businesses. Now, we’ll need to look at doing something similar.”

In other positive economic news, the Darlington Nuclear plant is in the midst of a $12.8 billion refurbishment. Darlington provides about 20 percent of Ontario’s electricity, so the major overhaul of its four reactors is taking place on one at a time, while the other three reactors are running. That means 2,000 extra people showing up for work every day, above and beyond those running the plant, and a significant rise in residential development. With a new 30-acre, Toyota distribution center currently under construction, as well, the employment situation will continue to thrive.

Clarington is the largest municipality, geographically, in the Durham Region and agriculture is a big part of the local economy. Algoma Orchards uses state-of-the-art planting systems to grow over 445 hectares (1,100 acres) of apples at their Clarington facility. Mayor Foster boasts, “Fifteen minutes from your front door, you can go berry picking, apple picking, be in a forest, go to the lake fishing, camping at Darlington Provincial Park. Hundreds of Quebecers come to Port Darlington and Bowmanville to fish every year. We have downhill skiing, cross-country skiing, horseback riding, hiking, biking; at Canadian Tire Mosport Park, they’ll teach you how to drive your car on the same track where the first Canadian Grand Prix was held in 1967. Tyrone Mills has been operating for 180 years. It still runs with the pond and the dam; they will grind your grain for you, make custom molding, and they have a great bakeshop. Their apple cider donuts are phenomenal. Twenty minutes down the road, you can be at the nuclear power plant Visitors’ Centre to learn how a nuclear power station works. Clarington is really neat because we’re so spread out. Yes, you could say, I kind of like the community.”

But there are challenges to contend with – most important, the need for more serviced land. The Board of Trade has turned businesses away because it can’t accommodate their needs. Recently, the Region of Durham Council has directed staff to look at its large amount of reserve funds, with the intent of investing them in the ground. And Clarington will be a willing participant. Aging infrastructure is another challenge. Foster explains, “Because we have a number of small hamlets, I have a lot of community centers, some of which are historic buildings that are very difficult and expensive to maintain. The need for a new recreation center in Bowmanville has been a couple years in the making. But because we’ve got three major urban centers, if I build one of anything – a pool, an ice surface, whatever, I have to build three.” 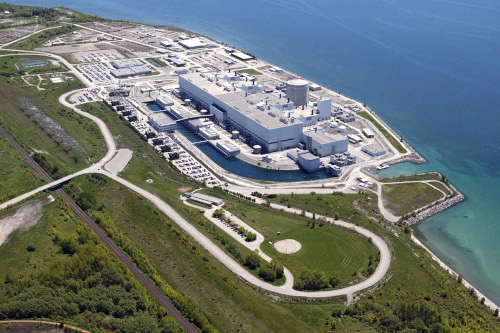 Healthcare is a crucial component to the community and Clarington is looking at a major expansion to the Bowmanville Memorial Hospital. Council just committed $5 million to that and is expecting an announcement from the province for more funding. In addition, the nuclear file is getting interesting. “Over half of the medical isotopes used around the globe come from Canada, and we’ll be looking at medical isotopes coming out of Darlington,” says Foster, “along with new technology in the nuclear sector – the small modular reactor (SMR). You can potentially build a reactor in a factory and double the input, and get it dropped at a different location. In the past, the focus has been on giant reactors. With an SMR, instead of stringing thousands of miles of lines to a remote northern location, you put the generation capacity right there. We already have a site at Darlington that was approved and has been maintained for additional base load in the future, and that could be a very interesting demonstration site.”

Five years down the road, the Mayor hopes the commitment for the GO Train comes to fruition with two additional stops in Clarington – one in Courtice and one in Bowmanville (the west central hub). “We’ll see high density mixed-use development around those stations,” he notes. “At the Courtice site: higher-price condos, with a southwest view to the lake and northeast view to the Oak Ridges Moraine. A ten-minute walk to the GO Train, immediate access to the 418, which takes you right to the 401 or the 407, maybe a 20-minute walk to the waterfront, and the Provincial Park is right there. That high density will allow us to maintain the green spaces we enjoy so much. We have two urban separators between Courtice and Bowmanville and that will be maintained, along with agriculture.”

“Renew Magazine lists Clarington as home to four of Canada’s top infrastructure projects, based on dollar value,” says Hall. “That kind of investment from different levels of government is a testament to our location and has drawn the attention of investors over the last few years. I would estimate that my office has seen five times the amount of leads we did five years ago. That being said, we sold all our serviced land in a very short period of time, so let’s hope we put ourselves in a place to capitalize on all that interest in the future.”

Mayor Foster admits, “There is lots of land available but servicing is the key in order to have businesses come here. For many years, the senior leadership attitude in the Region was that we don’t spend money on anything that might benefit a private investor, which included servicing. But the new attitude is: we don’t care, we want the jobs. We’re going to look at the reserves we have and try to get servicing in the ground. We’ve also had Bell Canada come to town with high-speed fiber. They are busy pulling cable everywhere. We actually had a complaint from a company that they’ll have to buy all new equipment to handle the speed. That’s a great problem to have.”

“I encourage everyone to come for the Clarington experience,” Foster concludes. “We have thousands of acres of apple orchards. If you come in the spring, the apple blossoms are out, the fish are running; five minutes from my office is Bowmanville Creek. In the spring and fall runs, there will be 10,000 plus salmon and trout, up to 20 pounds each – you can watch them going up the fish by-pass. And remember, in the morning, when the sun rises in the east over the GTA, it gently caresses Clarington first.”

WHERE: Durham Region of Ontario, east of Toronto 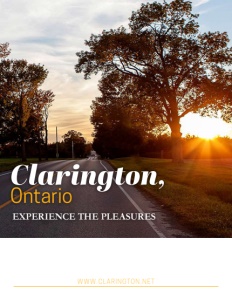