Business View Magazine interviews representatives of the City of Cayce, South Carolina for our focus on Growth and Economic Development in U.S. Cities.

The City of Cayce (pronounced Kaycee), South Carolina is a charming riverside community in Lexington and Richland counties. As part of the Columbia, South Carolina Metropolitan Statistical Area, and all the urban benefits that proximity entails, Cayce’s population of approximately 14,000 also reaps the rewards of small-town ambience and a burgeoning artistic and entrepreneurial hub. Accessibility is a breeze via the Columbia Metropolitan Airport, Interstate 26, and Interstate 77, while the new 70,000-sq.-ft. Lexington Medical Center facility is a gem of state-of-the-art healthcare. Combine those with a visionary local government that truly empowers its citizens to excel and, as the tagline professes, in Cayce it really is “Time for life.”

“We’re making smart investments,” says Cayce City Manager, Tracy Hegler. “We’re putting together great policy, but it’s very thoughtful and strategically done. Every decision we make is wrapped around quality of life. We want to be a great place to work, live, and play, but we are also a small city outside the state capital, and we don’t want to be overrun by certain things. We want to maintain that small town charm while growing wisely.” 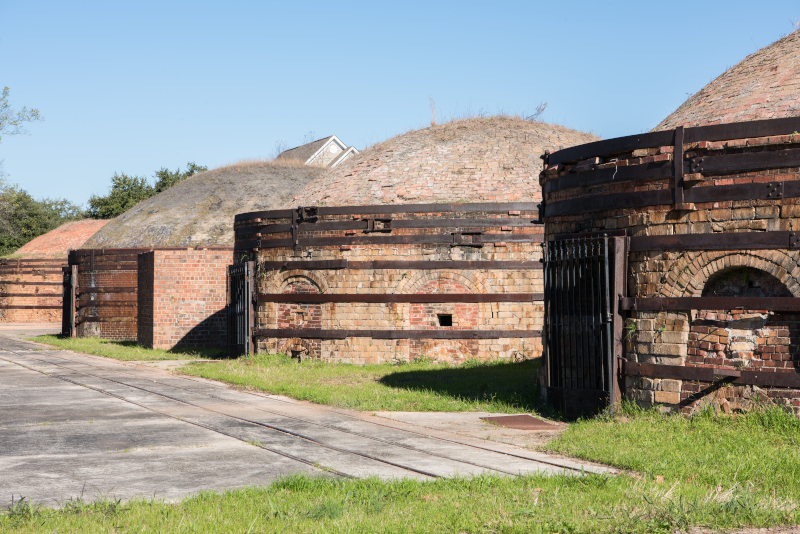 Cayce has just completed a $30 million water line project, replacing almost 75 percent of in-city water infrastructure. Given the age of it, and lack of investment from prior regimes, it was a major undertaking – but necessary to put an end to the brown water issues, pressure issues, and a few water line breaks that were very costly and disruptive. The project was done quickly and comprehensively with good investment that facilitated some very smart loans. In the end, the city was able to overhaul a major infrastructure source in just two years.

Hegler explains, “We had a main contractor, but divided the project up into seven different areas that were done concurrently. Obviously, it was a quality of life issue to provide better water but we knew it would be pretty disruptive to our citizens, so we put a large focus on community involvement; making sure we let them know what was going on, what they could expect, and having a hot line of sorts for any concerns that came up. We had a very human component to that project, even though it was technical, engineering, construction-related work. That proved successful and allowed us to get it done very quickly.”

According to Cayce Mayor, Elise Partin, “The tail end of that project was in our commercial district. We already had the Knox Abbott plan for traffic calming and pedestrian safety. (Knox Abbott is the major arterial through town). Since we knew we would be tearing up sidewalks to access water lines, etc., we layered those two projects – put the sidewalks back in with the landscaping buffer to the higher standards the new plan had created – and the synergy of them helped our dollars go further.” Coordination was key. Since many streets throughout the city were scheduled to be repaved, the City worked with Lexington County and South Carolina Department of Transportation to make sure the paving was done after the water line work was complete.

“With regards to the Knox Abbott project, if you’re heading from the airport into downtown Columbia to the State House or University of South Carolina, you are likely entering on Knox Abbott,” says Rachelle Moody, Assistant to the City Manager. “There is high traffic count, and we didn’t have enough buffers between pedestrians and the cars, so we we’ve done a comprehensive plan: closing some driveways, putting sidewalks farther away from the road. We’re moving all the power lines to one side of the road and raising them. We’re also planting a number of trees along the roadway, installing electrical conduits and burying all of the communication lines. So, in addition to having fewer poles along the road, we’ll have significantly fewer lines running as well. We were able to bury the electric transmission lines around one of our busiest intersections, which will improve that area significantly and make it safer. The project had a total cost of $8.5 million, but well worth it.”

These two large investment projects are paving the way for economic development and revitalization. Businesses along the Knox Abbott corridor are thrilled to see how it’s improving the aesthetics of their property – even though the work is being done in the right of way, they’re experiencing tremendous benefits. “We’ve had a couple sales, as well,” says Hegler. “A large, mixed-use apartment community has just sold on that corridor for a higher value than you would typically get for an apartment unit. Another parcel recently flipped for a substantial amount, much more than we would have seen a few years ago – potentially as a direct result of these investments.”

Another of Cayce’s attributes are its natural resources. As the Mayor reports, “We have about 12 miles of River Walk in the city that connects seamlessly to the full trail system in the region; about 25 miles in total, along with other trails that are part of the Dept. of Natural Resources – dirt trails that go by the dam and past earth works that were built during the Civil War. The City’s portion was done with state funding and grants, various incentives, tax increment financing – creatively putting money together for something with unlimited value. We also had some land donated by private property owners along the river. This was a ten-plus-year development of the full River Walk, done in phases, and maintained on an annual basis by the City general fund. It’s a highly popular resource.”

Another example of savvy business creativity was the Steel Hands project – a significant economic development revitalization project with intentional recruitment of the largest production brewery in the midlands region. The Mayor reports, “This was a site where we had a recycling plant burning wooden pallets, illegally. The fire got out of control and raged for three days. Eventually, through a series of events, we regained the rights to the property. So, we sold it to Steel Hands brewery and they have embraced that area. There is a steel facility across the street that donated a fair amount of rebar for artists to create with. The result is some amazing sculptures made out of rebar on the property now.”

Breweries are known to be traffic generators, and Steel Hands is always packed with customers. It has also raised the profile of other businesses and restaurants because people are now travelling to the brew destination from out of town. Most of the traffic goes through the old heart of the City, and Cayce has taken a unique approach to revitalize that original downtown. “We’re doing ‘previtalization,’” says the Mayor. “It’s about helping people to see what’s possible. So, we asked owners to clean out their vacant buildings and we threw one heck of a street party – music, food, drink – and we hosted artists. When people went in to see the art, they also saw the buildings and their potential. Between the first and the second such event, we already had one business go in – Swatch Graphics – and it’s thriving. We also have an artists’ gallery and a coffee shop, and more are starting to follow.” 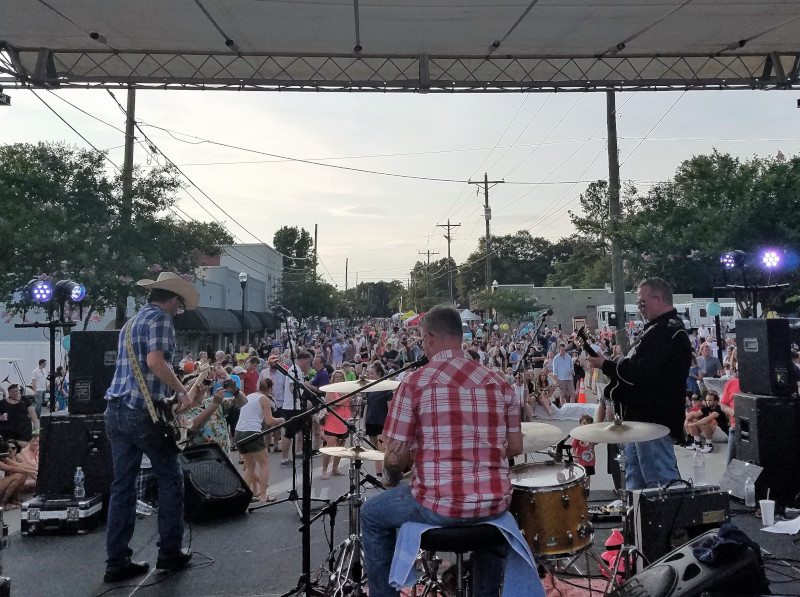 “We also purchased a property in the same area that had a rundown home, a lot of crime, and detracted from the whole street,” adds Hegel. “We demolished the building and, instantly, saw investment in that corridor. Recently, we were awarded a Connected Communities grant for that property to develop what we’re going to call the “Art Lot.” The front half will provide public parking, with art space in the back. It will be a gathering place with a variety of grass and gravel, places to sit, a covered area, and a memorial to fallen police canines. We’ll also host a competition for local artists to create permanent art features for placement on this lot. The whole downtown area has been designated an Opportunity Zone, so we’re looking forward to what that means for development in that part of town.”

The Opportunity Zone is new legislation for South Carolina that provides tax incentives for investments in designated areas. The City of Cayce is also considering some live-work zoning and policy implications that would continue to support the arts, to balance growth while retaining the unique character and not outpricing anyone in the community.

Mayor Partin sums up the best about life in Cayce. “As you can tell, we are proactive about our municipal responsibilities. We have a really good credit rating because we’re careful about what we do. And we have staff that is very thoughtful in the way they implement those projects. We know who we are. We are that small town in the middle of the bustling region and we like that. And we want to keep our identity. Fifty percent of our residents have been here 20 years or more; generations of families stay in this city. That’s unique, and it’s an asset. It’s not just the elected officials and the staff that are making this city great, it’s the active participation of our residents.”

What: City along the Congaree River: population 14,000

Where: In Lexington and Richland Counties, South Carolina 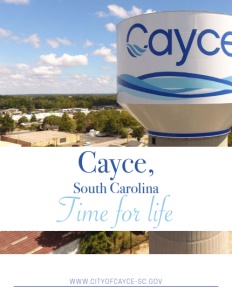