The Service and Action Arm of New Hampshire Municipalities

Local Government in New Hampshire
The mere mention of New Hampshire typically evokes the nostalgia of the famous lithographs by popular print makers Nathaniel Currier and James Merritt Ives of iconic New England villages, rural towns, and sweeping vistas.  New Hampshire is also famous as the home of the first-in-the-nation primary, which history has proven can make or break a candidate running for president.  But what New Hampshire is really known for is its town meeting.

Outside of New England, the concept of town meeting is generally foreign. Indeed, when describing our local government structure to non-New Englanders, we are often challenged with disbelief. Yes, here in New Hampshire, voters still rise from the floor to speak and vote on items on the town warrant, such as adopting a town operating budget, authorizing the town to borrow money to renovate the public safety building, or leasing a front-end loader. Debate can be lively, and the voters can vote down these items or even amend them. 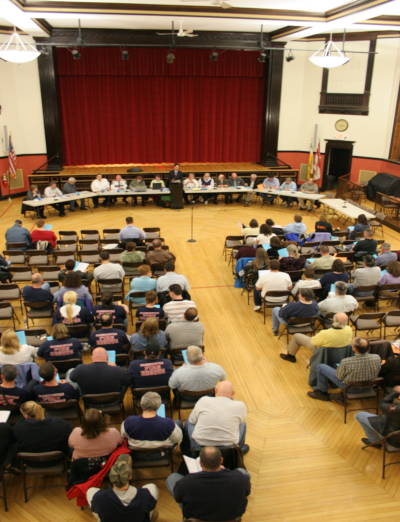 Of course, traditional town meetings are not representative of all New Hampshire’s municipalities. Of our 234 municipalities, 13 are cities, and 7 are towns with a town council-town manager government, different from the “traditional” board of selectmen. While cities—and some of these town council towns—differ from the bulk of New Hampshire’s towns in government structure, there is diversity even among this small group. Manchester, our biggest city, has a population of 110,301, while our smallest city, Franklin, has a population of 8,685. Geographic size also has no bearing on whether a community becomes a city or town.  For example, the town of Pittsburg is 291 square miles and the city of Somersworth is only 10 square miles.

The New Hampshire Municipal Association: Speaking with a Common Voice

Regardless of the size and form of government, municipalities rely heavily on volunteers or other elected officials who divide their time between their careers and families with their service to their municipalities. To assist these volunteers—and all municipal officials and employees—in their important duties at the local level, the New Hampshire Municipal Association was founded in 1941 by a group known as the New Hampshire Mayors Club.  The prevailing thought was that New Hampshire could benefit from the organization of a municipal league that would provide an organized forum for the exchange of information and ideas.  In fact, 1941 incorporation papers show that the Association was founded “to promote good municipal government and thereby promote growth and prosperity of cities, towns and villages.”

Today New Hampshire Municipal Association has a 25-member board of directors and a professional staff of 10.  Self-proclaimed as the “Service and Action Arm of New Hampshire Municipalities,” NHMA continues its strong legacy and remains a vibrant, dynamic non-profit organization serving local government. Membership is voluntary and must be approved by the municipality’s legislative body via the budget process. Over time, NHMA has established a rich history of strengthening municipal governments through information, advocacy, legal services, training and other services to local officials, enabling them to serve their municipalities and residents more effectively.

New Hampshire Municipal Association’s advocacy is guided by policy positions.  Because it is a member-driven organization, the legislative policy positions are set by NHMA members, not staff, through a defined process. Every two years, the process begins with the solicitation of policy proposals from town and city officials to create an ini­tial issues list.  The NHMA Board chair then appoints legislative policy committees which meet during the spring to discuss these ideas, as well as the ideas committee members bring to the table. The full Legislative Policy Confer­ence then takes place in September. Each member municipality, regardless of size, has one vote and is asked to appoint a voting delegate to cast its votes at the policy conference. As with a town meeting, conference attendees engage in lively debate on many issues, culminating in votes to establish the final policy positions, which must be adopted by a two-thirds majority.

To address the many legislative issues of concern to municipalities, New Hampshire Municipal Association has also adopted legislative principles that guide staff in setting priorities during any legislative biennium—a set of standing “core” principles. NHMA’s core legislative principles include supporting issues that provide greater authority to govern more effectively, efficiently, and flexibly at the local level, including local option legislation; advocating for maintaining existing local authority; supporting efforts that maintain existing revenue streams to municipalities; and being watchful of proposals to downshift or reduce local aid in order to meet other funding commitments.

Because New Hampshire Municipal Association seeks to enhance the ability of New Hampshire cities and towns to serve the public, much of our advocacy is focused on money, particularly state-local government partnerships.

Every two years—2019 being one of those years—the New Hampshire Legislature crafts a budget to fund state responsibilities and priorities, including public education, highway maintenance, prisons, environmental protection, health care, and more.  For decades, the state has been a partner with municipalities in different “revenue sharing” and “cost sharing” programs critical to the economic health and well-being of both our communities and the entire state. These have included programs that fund infrastructure improvements for roads and bridges, and for water and wastewater facilities; contributions to the cost of public safety personnel and teachers; and programs that provide general property tax relief to offset public service expenses unique to each municipality. In 2010, to weather the state’s recovery from the recession, there were significant reductions in every one of these municipal state aid programs.  These reductions were of a magnitude that could not be offset by local spending cuts; consequently, they inevitably led to increased property taxes.

Although the State of New Hampshire has experienced significant revenue growth over the past decade, the legislature has not fulfilled its promise to return state aid to municipalities.  Since 2008, there has been a significant reduction in municipal state aid programs, to the point that funding in 2019 is approximately 72% of the amount provided before the recession.

The state is in a much different financial position than it was in 2010, yet state funding for municipal programs remains suspended, frozen, reduced, or eliminated in the proposed budget.  This leaves local property tax taxpayers to continue shouldering the financial burden of providing essential public services that benefit the broader economic health of the state.

Although 49 out of 50 states have a municipal league or association like New Hampshire’s, many of the organizations focus primarily or entirely on advocacy and lobbying. However, NHMA also provides its members with legal advice and training through our Legal Advisory Service. This department comprises two attorneys whose primary job is to provide general legal assistance to elected and appointed officials from member towns, cities, and village districts. In addition to answering thousands of legal questions each year, the attorneys prepare articles and handbooks and provide training through educational programs across the state on a variety of municipal issues. These attorneys work hard to educate municipal officials and employees on everything from compliance with New Hampshire’s open government law (The Right-to-Know Law), to serving on a local land use board, to running town meeting. 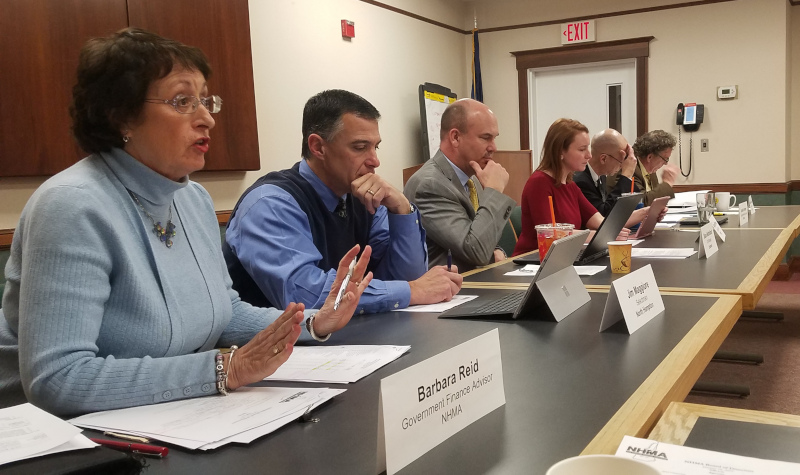 Making it All Happen

None of the above could happen without New Hampshire Municipal Association staff, who are all talented, knowledgeable, dedicated to NHMA and its members, collaborative, innovative, and fun-loving, yet serious about the work they do on behalf of NHMA members. The amount of work they produce is incredible, high quality, and on target.

All of us at New Hampshire Municipal Association believe strongly in local government and believe in local officials.  We recognize it is not an easy job and that many of them are on the front lines on many difficult issues.  NHMA is here to support them. Everything we do is for them, our members, whether it is legislative advocacy, Town & City magazine, providing legal advice, or presenting workshops. We count on the support of our members so we can continue to support our members!

WHO: The New Hampshire Municipal Association

WHAT: A non-profit association working to strengthen New Hampshire cities and towns