Business View Magazine interviews representatives from Sanford, North Carolina, as part of our series on best practices in American cities.

Sanford, North Carolina, located in the central Piedmont area of the state, is a city of approximately 30,000, and the county seat of Lee County. It began life as the state’s western frontier, home to Native American hunters and farmers, with settlers pushing into the region decades before the American Revolution – migrating colonists from Pennsylvania, Maryland, Virginia, and coastal regions of North Carolina, as well as Scottish immigrants arriving in America. The city was incorporated in 1874, and named after C.O. Sanford, a railroad engineer who was instrumental in the building of the rail lines through the area.

Because Sanford sits where white beach sand from the coast meets the Piedmont clay, the city has the right ingredients to be a large producer of clay bricks. In fact, at one time, Sanford produced almost 10 percent of the bricks in the United States and was named “Brick Capital of the USA.” Other industries which contributed to the city’s economy included textiles, furniture, and tobacco, all of which began suffering a severe decline in the 1990s – a decline that was further exacerbated by the Great Recession of the early 2000s. Lately, though, Sanford, North Carolina has made a significant comeback, leveraging its many assets in order to redefine its character and chart its growth for the future.

“This is a wonderful time in the history of Sanford to be talking about growth and redevelopment,” says Mayor Chet Mann, who was first elected in 2013 with an “Open for Business” platform, focused on job creation, quality of place, community pride, and establishing Sanford as a destination location; an agenda that dovetailed with a $14.5 bond package approved by the voters the same year. “We’re a community that is about 35 percent manufacturing-based; we’ve always been a city that made things,” Mann continues. “Upon the downturn of 2010, we were hit very hard and what prompted me to run, and others to get involved, was we felt like we had to get our city back on its feet, and reinvest in itself. This area is ripe for investment and our efforts to revitalize and redevelop have brought in triple digit returns in the last three or four years. It speaks volumes of what a community that decides to work together can do.”

According to Mann, part of both his, and the bond referendum’s, goals was to make Sanford a more walkable, pedestrian-friendly, and connected place. “So, what we’ve done over the last three or four years is construct a series of greenways and side paths,” he explains. “We’ve renovated or revitalized downtown corridors and, for the first time in many, many years, we’re starting to focus on infill. In a town our size, downtown living was not something that we were seeing happen, or even promoting a lot, but now we’re starting to see the revitalization of older buildings into lofts and apartments and retail shopping.”

“The investment in the downtown streetscape has been completed,” says Marshall Downey, Sanford’s Director of Planning and Development. “And we are seeing a marked interest in redevelopment opportunities downtown; an interest in new types of businesses, including micro-breweries, restaurants, mixed-use type of occupancies with housing units, and adaptive re-use of facilities, including conversion of a former horse and buggy manufacturing facility into a “one-stop shop” for all development inquiries, activities, and permitting.”

“The street we’re on, Chatham Street, seven or eight years ago had a tax base of about $400,000,” Mann adds. “It’s been redeveloped with a mixture of retail and office operations, and now, the next quarter, we’ll have one of our first downtown investments for lofts and residential living with retail underneath. This street, now, tax-base-wise, is seven to nine million dollars. It’s a great example of public/private partnership.  And what we saw happen here on Chatham Street has spring-boarded all through our downtown corridors. So, we’re continuing to work on those kinds of investments – undergrounding power lines, putting in side paths, making walkability a real emphasis. And I think it’s paying off with the quality of life aspects.”

Noting that the city’s investments are “paying off” is a bit of an understatement. “The end of business 2016, our commercial permits in Sanford were up 560 percent – and not all in downtown,” Mann declares. “We’ve attracted a lot of retail on the south side, and I think it’s all coming from people noticing the investments we’ve had. We’ve had two grocery stores move here; we’ve had a lot of big box activity that we could not enjoy in the last ten years, happening, now. We’ve had a $210 million expansion of our tax base since 2014, as of the end of year 2016. So, we’re starting to see measurable results. We’re having to add staff in our inspections and permitting and environmental health departments because we can’t keep up with the demand for permits. And there’s been a 37 percent increase in residential permits. We’ve had two major multi-family projects within the last two years. They are building so fast, they’re already working with staff to construct another one. We can’t review those and get those built fast enough.”

“Not only are we seeing the physical construction improvements, we’re also making major updates to our land use plan,” says Downey. “We’re updating our design guidelines. We’re trying to provide flexibility to encourage developers to come in; to make it a low barrier situation where we meet the expectations of the existing citizens and policy makers, but at the same time, have regulations in place that encourage development.”

Mann believes that, in addition to the city’s public/private partnership investments, other factors that draw people and businesses to Sanford include its location, its quality of life, and its educated workforce. “One of the big drivers of our area has been our community college – Central Carolina Community College that’s got about a 6,000 person enrollment,” says Mann. “Companies like Pfizer, GKN Automotive, Caterpillar, Pentair Pool Products, Magneti Marelli Powertrain – they have all taken advantage of our workforce and our Community College partnerships. We’re in the geographic heart of North Carolina; we’ve got a 140-year-old downtown and we have a tradition and history here that makes our quality of life very appealing to people who may be tired of the costs and transportation issues in Raleigh and Durham. And we’re just a 40-minute drive south.”

Another asset, of which the city is taking advantage, is its abundance of water. “We are water and sewer-capacity rich, here,” Mann asserts. “Our fathers made a real good decision a long time ago to go to the local river for our water supply rather than building a reservoir to provide water to our citizens. We have expanded our wastewater treatment facility, and we now have two major agreements in place, one with the third largest neighborhood in the United States, which is 15 miles away from us. It’s called Chatham Park in Pittsboro, North Carolina. It’s going take a town of 4,500 over the next 25 years to a town of about 60,000. And then to our north, about 15 miles, there is the Moncure Megasite. North Carolina is attracting a large OEM, primarily an automotive manufacturer, and we are providing the sewer/water design work and are going to provide up to a million gallons a day of wastewater to make that facility viable.”

“So we’ve done some things here in Sanford to leverage our resources and assets in order to attract people,” says Mann in summation. “We use our bonds to attract quality of life improvements and we’ve used our water and sewer resources to attract business. That’s where Sanford is different. And right now, we have a community that’s all on the same page. And for every dollar we’re investing, we’re seeing four, five, six dollars, in return. And that’s the name of the game.”

WHO: Sanford, North Carolina
WHAT: A city of 30,000
WHERE: Lee County, North Carolina, approx. 42 miles southwest of Raleigh
WEBSITE: www.sanfordnc.net 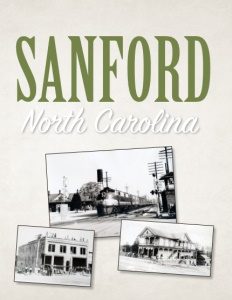