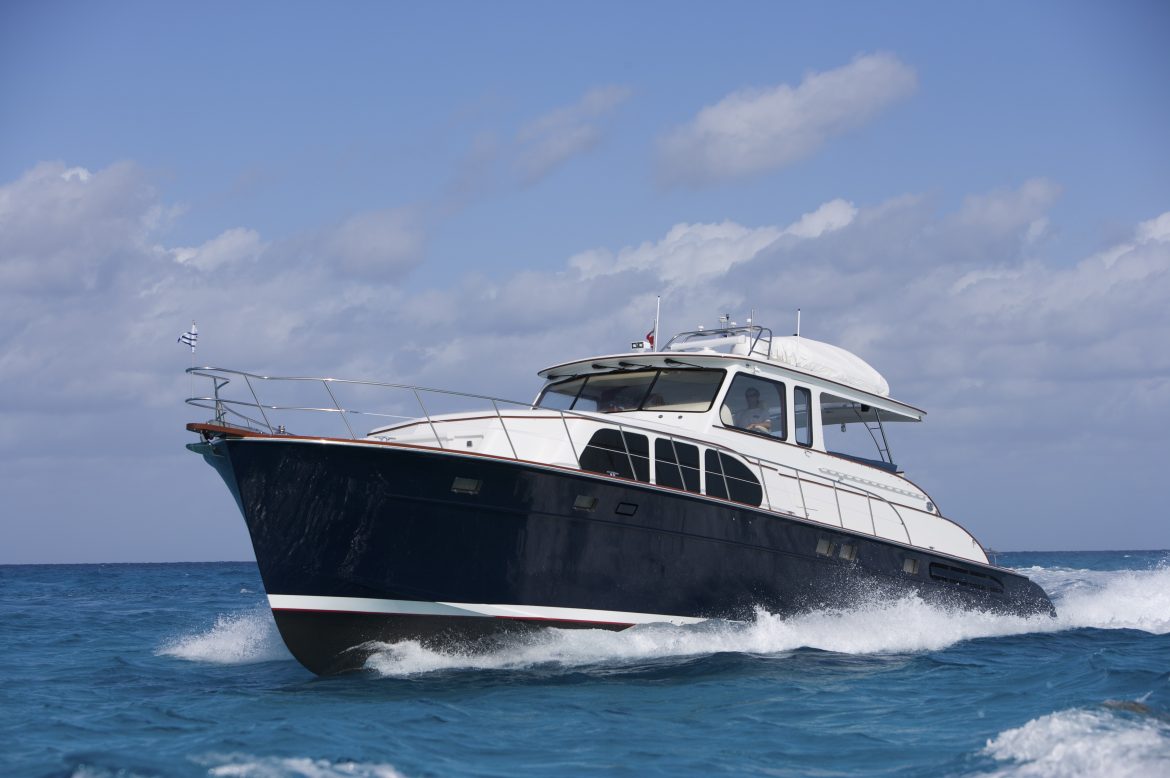 Business View Magazine interviews Cindy Purcell, President of Huckins Yachts, as part of our series on the marine and boating sector.

The Huckins Yacht Corporation is one of the oldest boat builders in the United States. The company is located on the Ortega River in Jacksonville, Florida, and is run by its third-generation owners, Cindy and Buddy Purcell. Huckins manufactures custom yachts ranging from 40 to 90 feet that combine classic design and traditional workmanship with modern technology and amenities. It has built a total of 457 yachts during its 80-plus years of operation, crafting vessels one at a time.

“The company started in 1928 by my grandfather, Frank Huckins,” says Company President, Cindy Purcell. “Before that, he was in the millwork business, originally in Boston, and then, here in Jacksonville.” In fact, Huckins came from a family that had been in the lumber business ever since his grandfather, Pembroke Somerset Huckins, and his great-grandfather John Huckins, of Bangor, Maine, founded the P. S. Huckins Company in 1854. “When the building boom of the 1920s went down, he decided to go into the boat business,” Purcell adds. “He had been working on a design for a planing boat – a large yacht that would plane. At the time, all boats were displacement boats, other than small runabouts.”

Planing is the mode of operation for a waterborne craft in which its weight is predominantly supported by hydrodynamic lift, rather than hydrostatic lift (buoyancy). Boats with planing hulls are designed to rise up and glide on top of the water when enough power is supplied. So, even though the boat does not weigh less when planing, the water resistance at high speeds keeps it on top of the water. When the speed of the boat is slow enough to let the water move away, the planing boat no longer planes. The design of the boat’s hull has an effect on how well it works.

“He took that design and started building boats and they were a success,” Purcell continues. “They were the first planing hull yachts and they ran fast for the time.” The Fairform Flyer 42’ Express Cruiser was the first boat launched, captained by Huckins himself on its maiden voyage from Fernandina, Florida to New York City. It was sold that autumn for $15,000 to David M. Goodrich of the B.F. Goodrich Rubber Company, who became a repeat customer.

“He sold boats to people like Goodrich and DuPont and other notable people,” says Purcell. In 1943, the U.S. Navy commissioned the Huckins Yacht Corporation to build two squadrons, a total of 18 PT (patrol torpedo) boats, for service during World War II. “He ran the company and stayed in business until the mid-fifties when he died,” says Purcell. “My father, after the war, came and worked in the company and we continued to build boats and be successful. My husband and I have been in the company since the ‘70s and we’ve continued to run it through different innovations. We’ve always been an innovative builder. And that’s where we are, today.”

In 1975, Huckins unveiled a radical transformation from traditional cold-molded mahogany to fiberglass composite core construction. Largely inspired by growing demand, the transition also presented a number of engineering advantages: significant weight reduction, for instance, allowing for a higher horsepower-to-weight ratio. That meant more speed and fuel-efficiency on top of the exceptional strength and seaworthiness that the new space-age materials provided, and today, Huckins yachts are among the lightest, strongest, and fuel-stingiest afloat, displacing thousands of pounds less than similarly-built competitive boats. Coupled with the company’s legendary Quadraconic hull, this weight-conscious design produces the Huckins-signature performance so admired by experienced yachters.

“Our customers today are still A-list,” Purcell says. “They may not be names you would recognize, but we are strictly in the custom yacht business, and what that means is you come to us, generally, because you’ve seen some of our yachts and you like the styling. You come to us and sit down with us and we design a boat for you the way you want it. If you say, ‘I’m going to run from here to the Bahamas, or here to someplace else,’ we can design it around how much fuel you’ll need; we’ll design it around the speed that you’ll want; we design it around the number of staterooms.

“We’ve built all kinds of boats. We’ve built such boats for an individual who was in a wheelchair, so the whole boat was wheelchair-friendly. We put an elevator in the boat so that the owner could get up to the fly bridge and down to the engine room, because he wanted to be able to check his own engines. We built a boat the owner wanted to run from here to Marathon (Key) in daylight hours. And, at the time, there was a bridge in Marathon that was a low bridge, and so the boat had to be designed to go under the bridge and it had to run at a speed to get him there. We’ve designed for fishermen that have won major tournaments. We’ve built from 36 to 90 feet – whatever the customer wants. In a good year, we will build three boats. In these years, since the 2008 downturn, it may be just one boat.”

Purcell insists that what mainly differentiates a Huckins Yacht from the competition is its distinctive planing hull. “Almost every builder out there designs on a planing hull, these days,” she says, “but all those hulls are very similar; ours is different. Our boats come up on plane at 12 knots, whereas most boats come up on plane at more than 16 knots. It’s easy for them to stay on plane at 12 knots, whereas other boats get knocked off plane very easily. Ours are noted for handling a seaway.”

“And it’s versatility,” she adds. We’ve built with all different kinds of power trains. We’ve built with regular props; we’ve built with water jets; we’ve built with outboards; and we’ve built with pod drives.” A pod drive is a relatively new power system that eliminates the need for shafts, struts, and rudders. Instead of using traditional running gear to transfer the engine’s power into thrust, a “pod,” consisting of the transmission, outdrive, and propeller(s), is mounted right through the bottom of the boat. The pod itself articulates to direct propeller thrust, so no rudders are needed. And the part of the pod below the waterline is designed to shear free of the engine without leaving a hole in the boat, in the case of a catastrophic grounding.

As successful as Huckins Yachts has been for almost a century, Purcell believes that the custom boat industry, as a whole, is much smaller than it used to be and that its days might actually be numbered. “Take the car industry,” she says, by way of explanation. “Ten or fifteen years ago, you could still order ‘special things’ for a car; these days, cars come with all the special things on them. The car industry has gotten so good that they put the leather seats in, they put all the amenities in a car; it’s not a special order. And I think that’s truly the way this industry is going. So, the production industry is the way to go, and we’re working on that, right now. We are looking at co-venturing with someone to build a line of production boats, for the moment, at least, in two different sizes. They’ll still be very distinctive, because of our pedigree, and our design will go back to a boat that we actually built in the ‘30s. So, we have a DNA of the boat that we’re building. We will maintain our quality, and we’ll just produce a very high-end production boat. And we will still have the capacity to build a custom boat if someone wants one.”

With their distinctive styling, superior craftsmanship, and state-of-the-art technology, all backed by the legacy of an 89-year-old company, Huckins Yachts are still designed to make history. 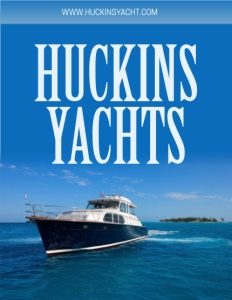