Business View Magazine interviews representatives from St. Louis Downtown Airport, as part of our series of regional airports in America.

St. Louis Downtown Airport is ideally located in Cahokia, Ill. just across the Mississippi River from the Gateway Arch and downtown St. Louis. The Airport is the metropolitan region’s second busiest general aviation airport and Illinois’ third busiest, aside from Chicago’s O’Hare and Midway Airports. St. Louis Downtown is owned and operated by the Bi-State Development, a Missouri-based “federal compact between the state of Missouri and the state of Illinois,” explains the Airport’s director, Erick Dahl. The airport was originally constructed in 1918 as just a turf runway and then expanded a bit in 1929. Since then, it’s steadily grown to become what it is today, with three runways and two terminals, as well as hangars situated on more than 1,000 acres.

The St. Louis Downtown Airport was closed from 1958 to the mid-1960s, when Bi-State Development assumed ownership. “Elected officials in Missouri and Illinois came to Bi-State Development leadership and said we need a reliever airport. We have to have a viable airport close to downtown,” says Patti Beck, Director of Communications at Bi-State Development. “We want you to take on this project and that’s when we purchased it in 1964 and reopened it in 1965. When it reopened, it was initially called Bi-State Parks Airport. Then in 1999, it was renamed St. Louis Downtown Airport to re-brand it and to emphasize its three-mile proximity to downtown St. Louis.” 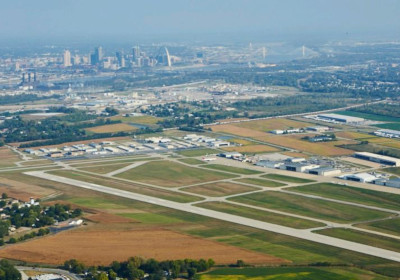 Today, St. Louis Downtown Airport caters to business and general aviation, serving as a reliever airport for St. Louis Lambert International Airport. “The federal government would consider us to be a reliever airport in the sense that we have traffic from Lambert come here every once in a while,” says Dahl. “We do see commercial operators on a charter basis; Delta, Paradigm, and a few other charter companies will operate large aircraft out of the airport, like 757s, Airbus 320s, and those types of aircraft. We see those almost every day. We are used by all of the downtown venues, such as concert venues, baseball teams, and hockey teams that fly in and out of the Airport as well. We’re not a commercial airport where you’d come to us to buy a ticket to go on vacation or on a business trip. But we do have quite a number of aircraft fly through the airport on a daily basis for a variety of different operations.”

The St. Louis Downtown Airport began as a flight school and aviation education has continued to have a strong presence at St. Louis Downtown Airport, expanding to include multiple flight schools for industries around the world. In fact, St. Louis University was granted Certificate No. 1 for providing flight training in the United States and the program continues to operate at the Airport, serving about 140 students from around the world, annually.

Dahl points out that, for several key reasons, the Airport’s profile extends far beyond that of many regional airports. “We have one of the largest MROs (Maintenance, Repair and Overhaul) in the world,” he says. “Gulfstream Aerospace is here at the Airport on about 60 acres of land and it continues to design and engineer, repair, or remodel aircraft for organizations around the world,” he explains. “In addition to Gulfstream, We have West Star Aviation at the airport providing similar MRO activities on a wide range of aircraft to users all over the world.”

“In addition to those large MROs, which are known almost worldwide for their brands, we have a number of different, special aviation service organizations,” says Dahl. “Helicopters Inc. does a lot of helicopter management around the country. Jet Aviation, which has a worldwide presence as well, is one of our Fixed Base Operators at the Airport, as is Ideal Aviation, which mainly deals with our smaller aircraft. But it’s also one of the world-class FBOs in the field.”

St. Louis Downtown Airport has 15 full-time employees working in maintenance, fire fighting, and as office staff, as well as a safety management specialist and an office manager. That total doesn’t reflect the multitude of jobs created directly and indirectly by the Airport, notes Dahl. Both he and Beck take pride in relating that a 2012 economic impact study found that the Airport generates $584 million of economic output every year. “The impact that we have on the bi-state region, both sides of the Mississippi River, in Missouri and Illinois, but especially on the Illinois side; that $584 million in economic benefit to the local economy is phenomenal and very important to this region,” says Beck.

Dahl echoes Beck’s opinion. “It does show that the Airport has a larger economic impact on the region than some baseball teams have on theirs,” he says. “So we do contribute to the region quite a bit.”

Where hangars are concerned, the Airport owns comparatively few, most of them relatively old, including some 1929 Curtiss Wright hangars that were part of airfield’s early expansion that were visited by aviation pioneers like Charles Lindbergh, Amelia Earhart, and Jimmy Doolittle. There are also some T-hangars available as month-to-month rental space.

“Nearly all the large infrastructure here at the airport, for hangars and ramps and things like that, are owned by private parties,” says Dahl. “St. Louis Downtown Airport looks at itself as striving for a public/private partnership all of the time. How can the Airport and Bi-State Development build the public infrastructure to allow the private parties the best economic competitive advantage here at the airport? Bi-State Development does have the ability to issue bonds. So if there was a hangar that wanted to come up and a private party was looking to do that, we do have a way to fund private development hangars if that’s the path they wanted to choose. But in general, we would rent land and most of our revenue comes from land rentals versus hangar rents.”

It’s a business model that works well for St. Louis Downtown Airport, which is 100 percent self-funded from those revenues, receiving no tax dollars or funds from Bi-State Development. The Airport also funds its own capital expenditures, including maintenance projects.

“There are tax increment finance districts that exist, overlayed on the Airport from local jurisdictions, but they’re not something the Airport directly receives money from,” explains Dahl. “We do receive federal monies in the way of the FAA Airport Improvement program. We would pay five percent of those project costs and that all comes from the general fund. But we don’t receive any local tax support whatsoever.”

Speaking of capital projects, the St. Louis Downtown Airport is currently expanding taxiways to accommodate larger aircraft, such as the Boeing 757-300, which is about 19 feet longer than the 757-200 the Airport serves now. The additional length is required for turns, explains Dahl. “We have about seven intersections that are eventually going to be rebuilt for that aircraft, but right now, we’re doing five of them,” he says. “Then, once that project is done, we’ll roll into a project where we’ll potentially be relocating our parallel taxiway to our primary runway and that will see the resurfacing of that runway. It’s about a $15 million project to relocate that taxiway and rebuild it. That’s probably the largest project that’s coming up in the near term. We do have plans for additional buildings, such as run-up engine testing maintenance pads, but those are a little bit down the road. The primary thing that we’ve had is the runway expansion in 2012, which allowed us to bring in larger aircraft and then the project that’s going on right now, and then the taxiway relocation project which will accommodate 757-300s all over the Airport. So we’re doing pretty well to expand to make sure we can always meet our growing aircraft demand.”

Should expansion ever be considered, the Airport has plenty of room, with about 330 acres of developable property at its disposal. Dahl says that’s another characteristic that sets St. Louis Downtown apart from other airports of its type.

“It’s somewhat unique that we’re so close to a downtown center, but we still have room to expand,” he reports. “A lot of airports like us, like the Kansas City Downtown Airport, in Kansas City, Mo. — they’re pretty land-locked and they’re trying to figure out how to reorganize their internal structure to accommodate more hangers. For us, we have lots of land to build on if we need to. The Sauget Business Park is the business park near the Airport. It does have land available that, if we wanted to, we could buy land to expand the Airport. But as it is today, we have lots of land to expand and build new hangars. Our runway probably would not get any longer than it is today; it’s 7,002 feet long. As for the aircraft that we have, the 757 and the Gulfstream 650, that runway length is appropriate for pretty much all the operations they would need to do.”

Ironically, servicing those larger aircraft also impacts St. Louis Downtown Airport’s competitive scope beyond regional, statewide, or even national concerns. It all comes down to the distance those planes can travel.

“When you look at the Gulfstream 650 ER, or the 757s, or the aircraft that Gulfstream is building, or the aircraft that West Star is maintaining, they have such large ranges in flight that they could literally go anywhere in the world to be maintained,” explains Dahl. “So our competition isn’t local. Our competition is pretty much worldwide. So, when you think about the St. Louis Downtown Airport as being downtown in St. Louis, it’s really a worldwide asset that people from all over the world come to. Our competition is more like Heathrow or like Dubai. It’s not necessarily the Kansas City Downtown Airport. It’s not necessarily the St. Louis Regional Airport or anything nearby. How the Airport differentiates itself is how do we provide services to those people who are known as world travelers and what can we give to them that they would expect?”

Going forward, Dahl and St. Louis Downtown Airport’s management are focusing on what the air travel of tomorrow will be. “We have to talk about more generalities such as what does aviation look like in the future; what does the proliferation of drones look like; what does personal flight look like; is there going to be something like a personal Uber that you can get a plane from,” Dahl proffers. “Those are the questions that we necessarily can’t address, but we need to make sure that we stay fluid and dynamic so that if those things become more prevalent, we have a way of accommodating them.”

Check out this handpicked feature on the St. Paul Downtown Airport – The Twin Cities reliever.

WHAT:  A public-use airport

WHERE: One mile east of the central business district of Cahokia, in St. Clair County, Illinois 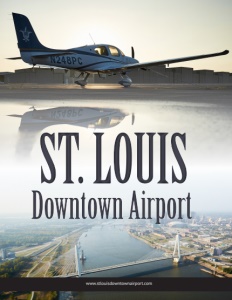