Michael (Mike) James is the quintessential entrepreneur; a born innovator who has earned a reputation as the “go-to guy” for solutions to industrial cleaning issues, particularly in the oil and gas sector. Since James founded Triton Industries, LLC in 1997, the business has become a much-respected supplier to shipyards, refineries, chemical plants, and barge companies around the globe. Triton’s exclusive vacuum systems are employed on six continents, including industrial installations in the U.S., the Arctic Circle, the Caribbean, the Mideast, Southeast Asia, and Latin America. What James touts as “Simple Minded Engineering,” is actually an innovative process of transforming original design concepts into manufactured reality that outperforms the “Super Truck” vacuum systems. And it all happens with a dedicated team in a single facility in the small town of Lottie, Louisiana. 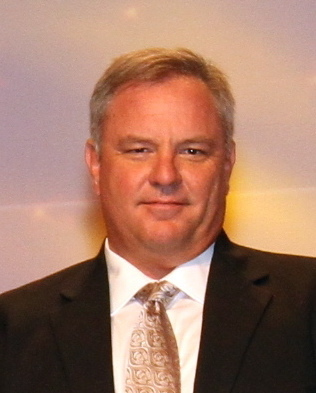 Triton Industries took its name from a Greek mythological demigod who could unleash the power of the sea, at will. It’s a name that speaks to the strength of the company’s commitment to quality and its customers – to create a cost-effective industrial vacuum system, which is safe, compact, easy to operate without special certifications, yet powerful enough to perform in demanding petrochemical, marine barge, and offshore environments.

A gamechanger in the industry, Triton’s portable industrial vacuum systems are easily handled by pick-up trucks and forklifts. These compact units cost 40 – 60 percent less than vacuum trucks, fit into a fraction of the space, are quieter, safer, and avoid scheduling headaches. Safety is a top priority; systems are available in Class I Division I, and Class I Division II ratings for hazardous installations. In addition to Triton Industries, Mike and his wife, Lisa, started Brahman Systems (cable and hose protection for industrial traffic), and their most recent company, Waterline Tank Technologies. Waterline was formed specifically to provide the tank cleaning and maintenance market with the first, and only, multi-purpose manway. Tools offered include a powerful, simple, cost-effective, submerged jet mixer.

James explains, “One day I was asked, ‘How would you clean an oil tank from outside the tank?’ I didn’t know, but after thinking about it, I configured something with parts off the shelf and other pieces of equipment and built a swivel. We call it the Twister. The company that requested it tried it out and it worked. And then they showed us, on paper, that the first three tanks they cleaned with it, saved them $2.8 million in tank cleaning costs. It’s a really simple device – working from a manway instead of being on the tank. Another advantage is that it’s built to get close to the floor in a horizontal cleaning pattern, but not aimed at the floor. That worked well.”

Another of his patented inventions was the Kraken vacuum-fed, positive displacement system, which was a godsend at the time of the BP Deepwater Horizon oil spill. In 2010, Triton Industries received national attention, including a number of awards for the role its equipment played in helping clean up that spill. James recalls, “My equipment is a fraction of the size of other oil vacuum systems. When the oil spill happened, I immediately knew that I could load vacuum boxes on barges. So I sent the governor an email and because I wasn’t on the proper list, I wasn’t responded to. But then somebody at the governor’s office had the bright idea of using vacuum equipment on barges to load (my idea). So they started bringing in other people, but all their equipment was too big. Then, they asked us to come. The oil was going into the marsh where it was shallow, and our equipment could fit on the shallow-water barges. At the peak, there were 450 ‘vessels of opportunity,’ as they were called. And our 16 barges working with the governor and the Louisiana National Guard picked up half of the recovered oil. So there was a lot of notoriety from that. Some of the oil had paraffin in it and it was getting stuck in the barges. And one of the only pumps that would work on this was a machine called a Kraken, which I had a patent on. So we also had a lot of success from that.” 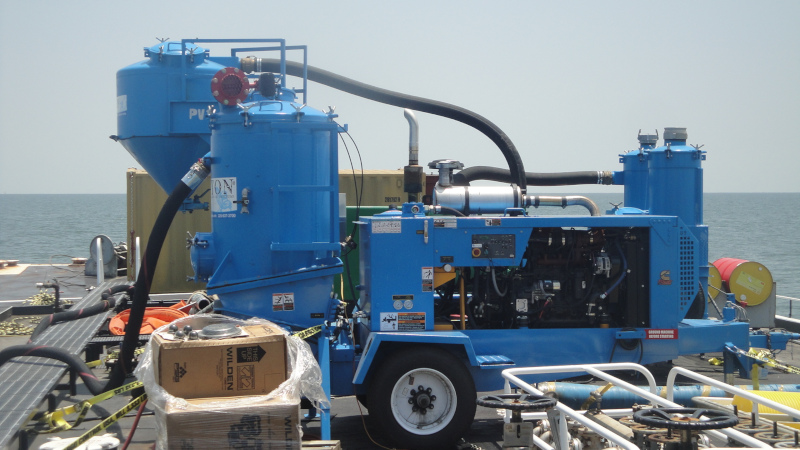 Triton machines are well-known for requiring very little maintenance, which is important in the oil and gas sector because of the often remote locations. The company’s clientele includes all the major players. Right from the beginning, Haliburton, Exxon, Shell, and Amoco have been the firm’s bread and butter and the focus was on making them happy. Triton specialized in long-term rental; pricing the equipment at an attractive rate that made sense to keep it. Instead of having to schedule a vacuum truck, it was worthwhile to have it, onsite – a great cost saving tool. Triton machines are very simple to run and the customer supplies the service personnel. When the machine is delivered, laborers on the jobsite are trained by the Triton team as operators, making sure they are comfortable with the equipment. And Triton also provides 24/7 support.

The Brahman System is an engineered ramp with top-opening doors able to be picked up with a forklift. It is certified for 135,000 pounds of crush strength and comes in different sizes that go together like a Lego. Traffic and heavy equipment on an industrial site can easily go over the ramps; they don’t slide. “One of our first customers – a big government ship yard – ordered 100 at one time and we happened to have them in stock and started delivering the next day,” says James. Not willing to divulge too much about what’s on tap, he shares, “We have some improvements coming up on the tank-cleaning nozzles and a couple of patents coming on that. But we’re taking our time and don’t want to introduce them until they’re ready. There’s a lot we can do with the Brahman Systems as far as traffic control, whether it’s road blocks or places to stop traffic – it’s not just a ramp to cover utilities on the ground.”

As for marketing their ingenious developments, Triton Industries has their products in place where they are most effective. The customers love them, especially with ROI, where savings of 40 to 60 percent are documented. According to James, “We have white papers supplied by our customers on our product use. So we really do let the product do the talking for us; I’ve never had a salesperson, it was either me or my managers who would go to a meeting. We’re in the ‘why didn’t I think of that?’ category. We call it simple-minded engineering. We just have one facility for administration and manufacturing. Tucker Laverne and Mike Noel do a great job running the office side of the business, and I’m very fortunate to have such a great inside team and outside crew.”

In 2011, the National Institute of Standards and Technology honored Triton Industries with the award of Innovator of the Year. James reflects, “We’re really proud of that because we’re in a very small town called Lottie, Louisiana and we only have a dozen employees and it was a big deal for us. It’s a strange feeling to have something you built going past you on the highway, but it’s a good feeling – to see some other company going down the road with our equipment on the truck.

“For the future, I do envision another location. But my experience has been that no matter how good, or how different, or how efficient a product is, people are very slow to change, regardless of what you put in front of them. And I don’t think we’re in the marketplace yet. As time goes by, though, I think it’s going to snowball for us, and it has started to in the last five years. It’s more of the business taking a life of its own and new clientele coming from we don’t know where. We’re not trying to be the biggest company; we’re just trying to be the best we can be.”