The city of solutions

When Mitchell, South Dakota encounters a problem, they find a solution. This can-do spirit extends as far back as the building of the city’s most famous landmark – the world’s only Corn Palace.

“One of the reasons the palace was built was in reaction to the Lewis and Clark journals,” says Neil Putnam, Director of Planning and Zoning for the City of Mitchell. “When Lewis and Clark came up through the Missouri River and then the Dakotas, they talked about the barren land up here and whether it was productive. Well, the founding fathers here said, ‘We need something to symbolize that this is very productive land,’ and that’s a short story of how the Corn Palace came to be.”

Not only did the Corn Palace draw attention to the area’s fertile lands, but it quickly became the symbol of the city and a nation-wide attraction that brings more than 500,000 tourists to Mitchell annually. Each year the structure is clad in naturally-coloured corn, depicting images and scenes to reflect that year’s theme. The whimsically designed building is known as the “folk art wonder” of South Dakota and has become far more than just a symbol of agriculture. It’s the home of Mitchell’s fall festival and the center for industrial exhibits, circus, dances, stage shows, meetings, banquets, proms, graduations, as well as regional and state sporting tournaments.  It has even been named one of USA Today’s top 10 places in America for high school basketball tournaments. Perhaps it is fitting that the local high school mascot is the Mitchell Kernels, also the Dakota Wesleyan University Tigers play in the palace. 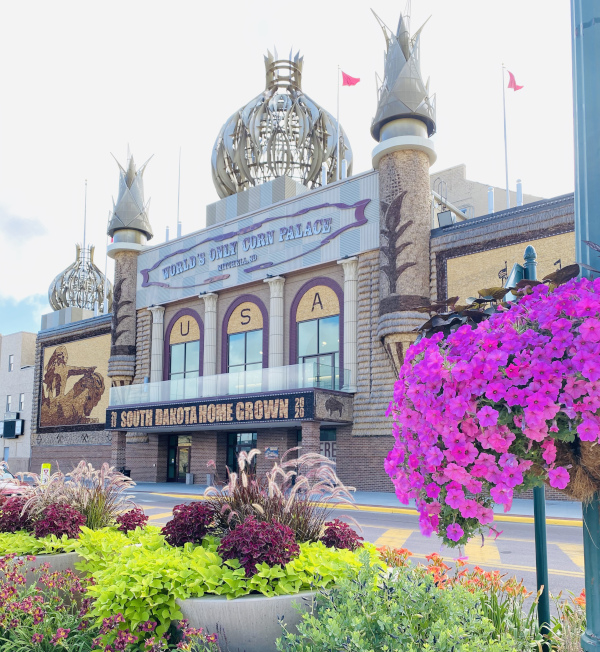 The city of about 16,000 is located on the eastern side of South Dakota, about an hour west of Sioux Falls. “We are right off Interstate 90, so we are a very popular stopping point for tourists and visitors because we are a direct line to the Black Hills and the Badlands, which is Mount Rushmore,” says Putnam. “We get a lot of traffic coming across the interstate.”

While agriculture is still a major industry, Mitchell also boasts a strong technology sector. The city is home to Vantage Point Solutions, which offers solutions for business challenges faced by broadband and data network operators; as well as Innovative Systems, which provides advanced voice and video systems for communications companies. “We do have some significant technology jobs here,” Putnam reports, “as well as a pretty good manufacturing base. We have a Toshiba plant here and two large truck trailer companies – Trail King and Trail Eze – along with other manufacturers.”

The city’s number one employer is the hospital system, Avera Queen of Peace. There are many clinics located within the facility and the same healthcare company also owns one of Mitchell’s nursing homes.

The city’s education system is the second largest employer. It includes two higher education institutions – Dakota Wesleyan University and Mitchell Technical College – as well as both public and parochial schools.

“We are fortunate that we have two schools and they work very well together,” says Putnam. “Mitchell Technical College is a two year school that offers career and technical programs. Dakota Wesleyan University is a smaller liberal arts college that was founded by the Methodist Church prior to statehood. MTC and DWU are nationally recognized and they are a model of how two institutions collaborate in offering students both a technical and a traditional collegiate experience. A famous DWU alumnus is politician and 1972 Democratic presidential candidate George McGovern. We have a McGovern library and he used to live across the street from there. He and his wife went to school here and he subsequently became a history professor here. So this is McGovern’s hometown.”

The city’s demographic puts the average age of the population in the 30s, with a mix of students and seniors. “Those technical jobs that I mentioned are ideal for working families, so they have a lot of younger employees,” Putnam says. “I would say we are pretty diverse, at least in regard to age.”

In the spirit of problem solving like the Corn Palace, Mitchell is currently working on several projects to improve infrastructure and recreation in the city. Like many aging towns, Mitchell’s infrastructure has reached the time for upgrades .“Those are the big challenges that a lot of the small towns throughout the nation are experiencing,” says Kyle Croce, Director of Public Works. “We are focused on improvements for infrastructure.” 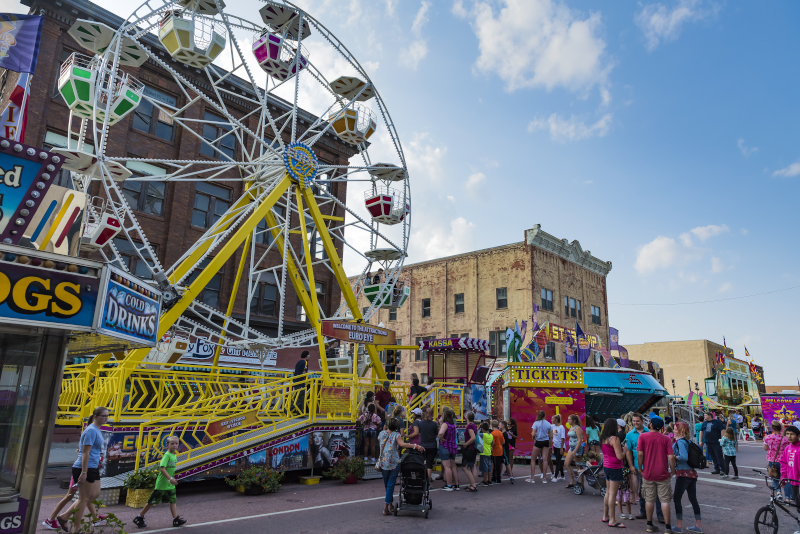 One of those improvements is building a new water storage tank to better suit the needs of the city residents. “It’s under design,” Croce explains. “We bought the property for our new water storage tank and that will increase our reserve and supply – it’s a two and a half million gallon tank. The project will start construction next year and last two years until completion.” The new tank is a major upgrade to Mitchell’s current 300,000-gallon tank located in the city’s downtown. Croce adds, “We worked with our consultants and went through investigations and found that we need a significant increase in our supply reserve on hand in the City of Mitchell. So, we found a location and we are designing a significantly larger tank.”

One of the most significant problems the city faces is algae blooms in Lake Mitchell. They are currently working on a huge cleanup project with the help of various community groups and governments. The 696-acre man-made lake was constructed within the Mitchell city limits almost a century ago, but has been plagued by water-quality issues for the past few decades. “It’s just like other lakes in the Midwest and throughout the nation,” Croce explains. “Right now we have a lot of algae blooms and that’s been occurring for 20-30 years now.”

The lake was originally constructed to be a potable water source for the city, but it’s now primarily a source for recreation. Since 2000, the city’s water supply has come from the Missouri River. But with the algae blooms, recreation often has to be halted for safety reasons. Croce insists, “If there is existing bacteria with that algae bloom, we have to shut down the lake. We have to put in warnings and restrict recreation activity. So the real goal for the water quality improvements is to reduce that bacteria, or the frequency of having to close the lake for recreation.”

To help remedy the lake’s algae issues, a local grassroots organization under the name “Friends of the Firesteel” (named after the watershed area) has banded together to raise the funds needed to dredge the lake. That will remove the soft sediment from the bottom of the lake, which should significantly reduce the amount of times the city would have to ban recreational activities on the lake. There is a substantial population that lives along the lake, but about 70 percent of the lakeshore property around the lake is owned by the city. That includes lots of beaches, open space, and public access points, so those who don’t live on the lake have access to it.

Obviously, when Mitchell Lake is unusable, it effects many people across the city. That’s why the cleanup project is of utmost importance. To ensure they can get it done, the city has enlisted the help of the U.S. Department of Agriculture, US Fish and Wildlife, along with other state and federal agencies for state and federal funding and they are also working in co-operation with livestock producers upstream in the Firesteel. Additionally, other non-profit groups have stepped forward with direct and in-kind resources as well. This isn’t just a municipal project, it is going to encompass a lot of important partnerships and collaboration. The goal is to have the water cleanup achieved in the next five years, making Lake Mitchell another jewel in the city’s crown – much like the Corn Palace.

“We are hoping to reduce the number of closures and hopefully not have any due to the algae bloom,” says Putnam. “We want to see more fish and wildlife and have more recreational use and increased property values for the private property around the lake. We are also looking at various amenities as the lake water improves. And we won’t stop there. In five years, we want to make sure that we are the leader in water quality cleanup, lake cleanup efforts, rivers and streams – to show the state that we know how to do it. We want to have that kind of total commitment to water quality, cleanup, and conservation efforts.”

What: A fascinating, eco-focused city; population 16,000

Where: Located on the eastern side of the state, one hour west of Sioux Falls

Ducks Unlimited is excited for this unique partnership with the city of Mitchell, conserving wetlands for the betterment of people and wildlife. Mitchell is not only focusing on developing wetlands adjacent to Lake Mitchell but seeking opportunities addressing conservation and water quality on a watershed scale.

Dakota Pump Inc has been designing and manufacturing prefabricated Water and Waste Water pumping and control equipment since 1967.  Our team of engineers and technicians specializes in pump, piping, and valve systems, control/SCADA systems, service departments, and water system operations.  These functions provide supporting knowledge to our prefabricated equipment design and implementation.