Business View Magazine interviews representatives from Clarksville, Indiana, as part of our series on best practices of American cities.

Clarksville is a town in Clark County, Indiana, located along the Ohio River, directly across from the City of Louisville, Kentucky. It was founded in 1783 by Revolutionary War hero, George Rogers Clark, who, along with several other war veterans, was awarded land grants by the Virginia legislature, north of the Ohio River in what was formerly known as the Northwest Territory. The explorer, William Clark, George’s younger brother, laid the plans for the famous “Corps of Discovery” expedition to the west coast, when he shook hands with Meriwether Lewis in Clarksville in 1803.

The area where Lewis and Clark took off from is now the Falls of the Ohio State Park, located on a Devonian fossil bed and part of the Falls of the Ohio National Wildlife Conservation Area. The Devonian period occurred from 416 million to 358 million years ago, and when the Ohio River is not at flood stage, there is a large exposed fossil bed on the Jeffersonville Limestone bedrock, which people can actually walk upon to see the prehistoric fossils. 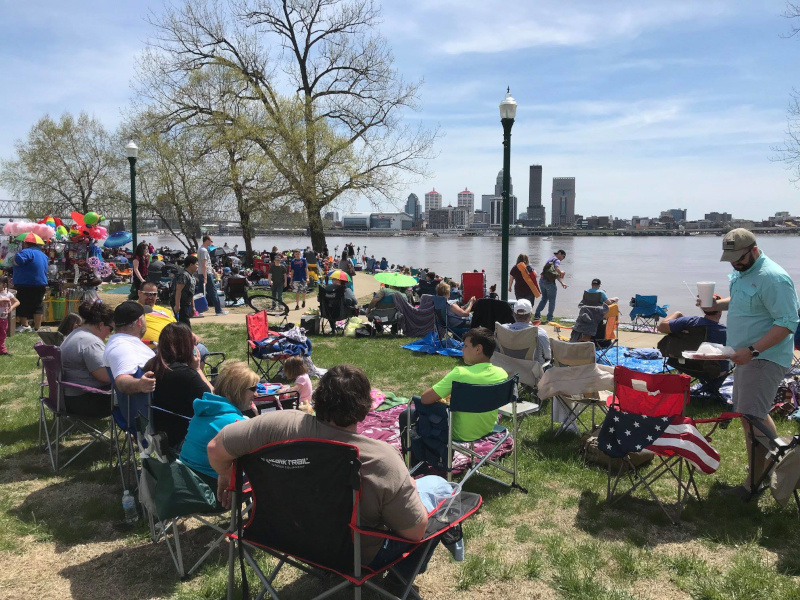 In 1937, the Ohio River did, in fact, exceed its flood stage, and the entire town of Clarksville was decimated by what become known as the Great Flood, after the river submerged the town beneath as much as 12 feet of water in some areas for over three weeks during January and February. With almost all of the old town destroyed, Clarksville was rebuilt with a new modern city plan. The post-World War II housing boom and new jobs brought growth to the city, and its population increased from 2,400 in 1940 to 22,000 in 2000. Today, the modern town of Clarksville, with a population of 21,724, continues to revere its past while moving confidently into the future.

Dylan Fisher, Clarksville’s Redevelopment Director, outlines three large-scale redevelopment areas that are currently on the town’s agenda. “They all offer opportunities for interested businesses partners to relocate and invest in our community,” he observes. “The first one is what we call the South Clarksville Redevelopment Area. It’s a 320-acre area on the Ohio River waterfront, directly across from downtown Louisville, at the foot of the 2nd Street Bridge. Of those 320 acres, 160 of them are what we call the transformation area, which is where we’re looking to ‘scrape, rebuild, and rehab’ old brownfield sites.”

The redevelopment of South Clarksville revolves mostly around three properties — the Colgate-Palmolive building, the Marathon Petroleum Oil Terminal, and Water Tower Square. The more than 40-acre Colgate-Palmolive property has sat vacant since the consumer products company left Clarksville in 2007. Two years after that, Marathon left another 20-plus acres in Clarksville, empty. The 28-acre Water Tower Square has slowly redeveloped into a mixed-use space but still has room for new construction and vacant office space.

South Clarksville Redevelopment Plan envisions a mixed-use development with new streets, a redesigned 17.3-acre riverfront park, a hotel, multi-family housing, retail/commercial establishments, and open, public spaces. The town has already invested over $15 million in public utility and infrastructure work, including an entirely reconstructed wastewater system to service the entire redevelopment area. “We’ve also pledged over $9 million in public/private partnerships to be a catalyst for the economic development activity. The public pledge includes gap financing for the first mixed-use project with 100 apartment units and 30,000 square feet of retail,” notes Fisher.

In April, Clarksville will acquire the Marathon property, which will allow it to begin looking for development partners as it seeks to create a new downtown on its waterfront. If all the pieces of the South Clarksville Redevelopment Plan line up, it offers a potential for $210 million in private investment, almost 650 new jobs, and more than $46 million in new tax revenues. An enticing factor is the existence of a tax increment financing (TIF) district that covers South Clarksville and doesn’t expire until 2038. 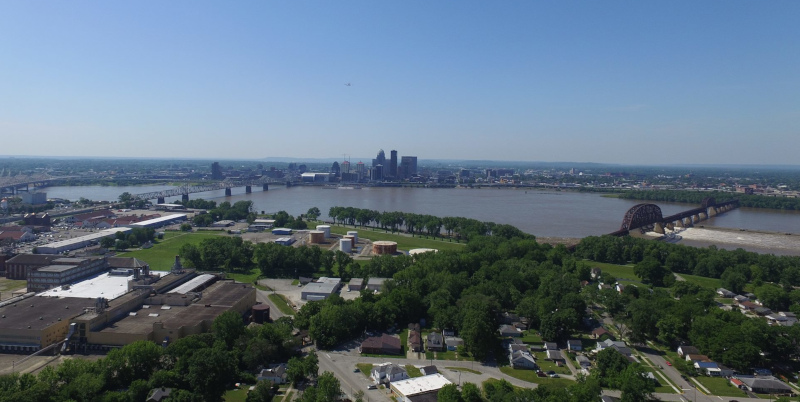 Jacob Arbital, Clarksville’s Planning Director, explains that after the South Clarksville Redevelopment area plan was put in place, but before private development commenced, the town revisited its zoning ordinances to make them more compatible with its new development vision. “The traditional method of regulating use doesn’t tend to lend itself toward creating great places that are easy to access, that are sustainable, and that are attractive,” he states. “So, what we’re seeing is that the value, in terms of regulation, is more in the form and design of a structure as opposed to its use. What we did in South Clarksville was take an ordinance that was 13-15 pages about use and 3-5 pages about form and design, and we modified that to create a new form-based code that has about 70 pages. And of those 70 pages, only about four of them are dealing with use; the rest of the ordinance is dealing with design and form of a structure and its public uses: sidewalks, landscaping, parking, and things of that nature. When it comes to use, the focus is merely to avoid nuisances. Beyond that, we’re seeing that the design of the site and the building is what’s important.”

“The second area that we’re currently working on,” Fisher continues, “and we’re more of a public supporter that’s not administering the redevelopment activity, is a partnership with a non-profit organization called the River Heritage Conservancy. They established a vision back in 2015 for a 600-plus-acre regional park that is tied into a linear greenway system that connects the three major southern Indiana communities (New Albany, Clarksville, and Jeffersonville) to Louisville. Of those 600 acres, roughly 400 are in the town of Clarksville. They’ve been utilized for the last 50 years for industrial activity from junkyards to gravel crushing to a variety of other uses of that nature. To date, the Conservancy has about 300 of the 600 acres either under their control or under partnerships with agencies like the town of Clarksville. In April, they will be unveiling their Master Plan and starting a capital campaign to raise the first portion of funds for that project. It’s located one mile away from the downtown redevelopment project, five minutes from downtown Louisville, and it’s all connected via a bike system. So accessibility to it, from a residential standpoint, will be very easy. And it’s estimated that up to two million annual visitors will visit this regional park system.”

“The third study area in our community is what we call the Catapult Central Clarksville, or 3C, Master Plan,” Fisher adds. “It looks at a 660-acre redevelopment area that is currently occupied by two regional shopping malls: Green Tree Mall and River Falls Mall. We are looking at big box redevelopment in the changing landscape of retail and commercial properties by trying to understand what the next 20 years will look like. We’re asking the community what they would like to see us plan for the future of the lands and property that have become heavily encumbered with retail and commercial development today.  Some of the sites are in very good condition, but they do not meet the standard we would like to see from an economic resiliency standpoint, as we plan to insulate our community to withstand major shifts in the retail sector. Such shifts would greatly reduce our tax base and our ability to continue to provide the quality public services that we currently do. In this case, the 3C Master Plan is trying to understand the basis of what makes a successful retail corridor, today, while taking an active role as a municipality to assist it in a long-term transition to become a much more resilient, thriving, and active commercial core.”

Town Manager, Kevin Baity, elaborates: “The consultants that we hired calculated that we have somewhere close to three million square feet of retail area in our community, with the majority of it in that 3C Master Plan area,” he explains. “And, of course, if you have three million square feet of retail, then you have associated acres and acres of unstructured, flat, single-story parking lots. So, part of the retooling of that area is how do we keep the stores open, temporarily relocate others, and then turn this into more of a true urbanism-style development and get rid of the seas of asphalt and concrete, while retaining the retailers so that they are not hindered or hampered or have to close? Right now, you can go for almost one-quarter of a mile in one direction and never have a cross street. So, we’re looking at developing a whole new street grid and within that grid will be traditional blocks with two and three-story development that will put retail and professional office on the first and second floors and then residential on the third. On several blocks, we will mix it with single-family homes, row homes, brownstones, townhouses, and lots of green space, putting people in the area where the retail shopping and restaurants are.”

Arbital weighs in on potential changes to zoning ordinances in the 3C area, explaining, “It’s a large area and contains about nine different zone districts, ranging from our lowest density, single-family district, to our heavy commercial, and everything in between, with the majority of that area being heavy commercial, which is very specific, with very few design standards, and allows pretty much any type of commercial use that you can imagine. What we know is that we can develop a vision, but ultimately, if our ordinance says we are going to permit large-box, huge-surface parking lots with very little focus on design and form, we’re not going to be able to achieve that vision. So, once we get that vision in place for the 3C, we’re going to do the same thing that we did with South Clarksville and follow up with zoning modifications to facilitate, enable, and enforce the outcome that we’ve tried to create.”

While redeveloping Clarksville’s physical identity, Fisher adds that the town is also going to emphasize its historical importance as the centerpiece of the newly extended, 4,900-mile, Lewis & Clark National Historic Trail that now stretches from Pittsburg, Pennsylvania to the mouth of the Columbia River near Astoria, Oregon. “The significance of that history will be shared better,” he claims. “It will be broadcast on a much higher level and shared with tourists and residents.”

WHERE: In Clark County, directly across from the City of Louisville, Kentucky