Situated in Solano County, a mere 23 miles from the state capital of Sacramento, the charming City of Dixon, California’s roots were planted in the mid-19th century quest to strike it rich. Pioneers first settled in the Dixon area in 1852, during the California gold rush, at which time the community of Silveyville was founded along a route commonly traveled by miners to and from the Pacific Coast. Three years later, Silveyville boasted a general store, post office, blacksmith, and a population of 150 people. In 1868, the Central Pacific Railroad put down tracks in the area and missed Silveyville by a few miles. So, local leaders decided to physically relocate Silveyville closer to the rail line to take advantage of the benefits of commerce and travel.

Originally, the city was named “Dicksonville” after Thomas Dickson, who donated 10 acres of land for the construction of a railroad depot in the newly located community. However, when the first rail shipment of merchandise arrived from San Francisco in 1872, it was mistakenly addressed to “Dixon” and the rest, as they say, is history. From then until now, the urban landscape of the town has developed mostly in between the railroad tracks and Interstate-80. 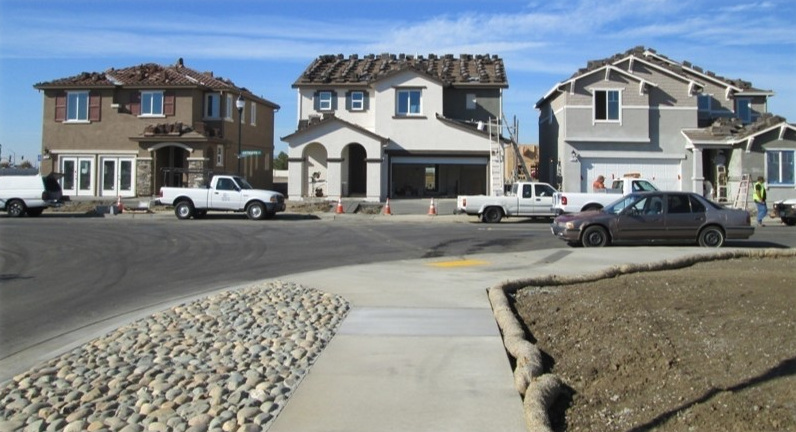 Dina Tasini, Community Development Director for the City of Dixon, California, gives an overview of the community. “Dixon is a town of 19,000 people in the most northern part of Solano County; adjacent to the city of Davis, and UC Davis, one of our excellent California public universities. We attract a large population from the Davis and Sacramento area because our house prices are very affordable. We are a safe community, and a good school district. The Bay area housing market is not affordable to many, whereas, Dixon’s housing prices range from $450,000 to $500,000 for a very nice 2,000-sq.-ft.-plus home on a standard family lot. About 70 percent of our land mass is residential, surrounded with commercial and industrial in the northern section of the city. In some ways people might classify us a suburban bedroom community, but we have a strange mix of commercial and industrial along our commercial corridors and Highway 80 and then, to the south and southwest, residential.”

Dixon, California offers a great number of jobs in various industrial and commercial businesses to attract a workforce. And they’d like to do more of that by updating the city’s General Plan. The vision is to preserve the current neighborhoods, while attracting new businesses and defining the northeast quadrant, and commercial spine through town on First Street (also a State highway) and along the I-80 corridor, as mixed-use. So far, they have been successful in bringing in a major truck sales and service company, TEC Equipment, to the northern portion of the city, as well as Scannell Development, which built a GE Warehouse in the same area. Along with great tax revenue, those businesses are also providing a new employment base. Since they came into town, a lot of spinoff of other industrial counterparts have followed suit.

Tasini admits, “One of the constraints we have in that northeast quadrant is we don’t have infrastructure to those areas, so there have to be interim ways to get water and sewer and roads through there to sustain the developments. Both Scannell and Tec have construction water tanks and retention basins. But we do anticipate, through our planning process, to have connections for the roadways. One of the more complicated things we do here is put together agreements to support these developments, so when they come in they’re not going to be responsible for laying down the water lines, but they will have to pay into a future fund to, ultimately, do that when adjacent properties are developed. So we have a continuum; and the same with some of the roadways. They have to do a few improvements, but the ultimate improvement is done through a development agreement, which has a funding mechanism where we can create the infrastructure when we have a cohesive number of people there.”

The General Plan is also considering sustainability issues and ways to improve connections with pedestrians and mass transit – including a new train station. The transportation piece of the Plan is taking a broad look at pedestrians, biking, vehicular, as well as transit. The landscape is pretty flat in Dixon and biking would be a natural for people to get to and from Davis, so the city could be a hub for the university.

“I think the connection between the university and us is something I’m going to work on,” says Tasini; “trying to help market us as a place that could have a residential component for students and faculty and administrators, and maybe a biomed facility, as well. That is untapped potential that will put us on the map. Right now, they go to Sacramento because it has a little more cachet than Dixon, but we’re easier to deal with and cheaper to live in. And there’s a large portion of land that’s within eight miles of Davis to use for a biomedical component, or a research facility, or even a university village, which, I think, would change the face of our city in a positive way and be a great opportunity for the region.”

Homebuilding is quite active in Dixon, California. It hasn’t experienced a slow-down like other regions. The city is currently processing close to 200 new home permits, with another couple hundred on line. Downtown Dixon, while being cute and cozy, is mostly single-story buildings and isn’t as vibrant as it needs to be. As part of the General Plan, a priority area has been designated within the downtown that would look at intensification of density and how to create additional residential opportunities. Like many other older downtowns, Dixon also has a situation where only a few people own a lot of the properties – and they own them outright. So, getting them to make capital improvements is a little more difficult.

Tasini explains, “We are a town where transition is difficult, but we do have policy makers that have been supportive in making changes happen so Dixon, California can reap the benefit of all of the growth in the area.  We are examining the possibility of providing more sidewalk space for outdoor dining and bicycle paths through downtown attracting visitors to our charming downtown. The challenge has been that our Main Street is also a State corridor, so we must coordinate with Caltrans, the state’s transportation authority, in order to change the road configuration. I think our demographics are completely changing which has led to new businesses in downtown. For instance, we have a wine bar that’s opening; we have brand new restaurants opening such as Rosemary’s Organic Restaurant, and a place called the Barn and Pantry (all local, organic farm food) that is now offering live music and spoken word downtown.” These venues are creating a lot of buzz in the region; a lot of younger people are coming from Sacramento and Davis for the music in the evenings.

“We know there’s a niche here to do something different and to be something different,” Tasini adds. “There is a lot of push for us to change and our Council has been very supportive. In fact, in the General Plan, part of downtown will be designated as a mixed-use district, allowing for commercial on the ground floor and residential above, so there would be more flexibility on how to redevelop a lot of these properties. In addition, I intend to look at zoning the downtown as part of a pedestrian overlay district to intensify growth in the core. We don’t have a vibrant commercial core since we have allowed office uses in the downtown leading to a quiet downtown with little to no activity in the evenings. Therefore, in order to create a welcoming place that would attract people, we would not allow any more offices on the ground floor – all street-level businesses would have to be pedestrian-oriented, with offices on the second floor or behind. To be honest, it is going to be a ten-year process. But they’re all fun challenges; that’s why I do this work.”

There are many vacant land opportunities for light industrial in the northeast quadrant of Dixon. Companies that have moved to the city say how pleased they are with the way the city facilitates development and gets you through the process. Tasini notes, “We are pro-business. We create personal communication and relationships with developers so they know they can come to us. We work out problems. We are the ultimate business-friendly community. We have an educated workforce, many graduates from the university, as well as a labor force. We have a lot of manufacturing, also. We already have quite an existing workforce. Dixon, California itself is transitioning and our workforce will be growing.

“The benefits for someone coming here is that we’re very fast through the entitlement process, which saves a lot of cost. No delays. A lot has happened here recently, and Dixon, California is a place that’s about to burst onto the scene. There’s no hidden agenda, no anti-development, the quality of life here is fabulous, and affordable!”

Where: Solano County, near Sacramento

Born in the quaint hilltop village of Sant’Elia a Pianisi in the Molise region of Italy, the Colavita family has been sharing its flavorful and fruity extra virgin olive oil worldwide for generations.  Today Colavita® is proud to call Dixon, California home.  With a new, state-of-the-art facility to supplement headquarter operations in New Jersey and Italy, Colavita Dixon has added the homegrown taste of California to the company’s Trusted Family Brand of products.