Ready for the new normal

Loudoun County, Virginia, already had a lot to be proud of, but a new infrastructure project and development opportunities make the Washington, D.C. neighbor poised for continued prosperity in a post COVID-19 world.

The county’s path to prosperity began more than 60 years ago with the construction of Dulles International Airport. In the late 1990s, AOL came, helping Loudoun County to eventually become home to the largest data center cluster in the world. The next game changer is expected next year when the Washington Metropolitan Area Transit Authority Metrorail system comes to Loudoun County.

“We have greenfield development opportunities, and that metro – when you think about the ability to react to the market, especially in a post-COVID world, when now our new greenfield metro-accessible developments can react to whatever the new normal is going to be for office; whether it’s enhanced ventilation systems or less common space, more office or more outdoor space, or whatever that’s going to be — we can react to that. And the ability to have an office location, a mixed-use vibrant metro-accessible location, one or two stops from Dulles Airport, and with a quick access to Washington D.C. – we think it’s going to be just a bright shining future for us here in Loudoun County,” says Buddy Rizer, Executive Director for Economic Development. 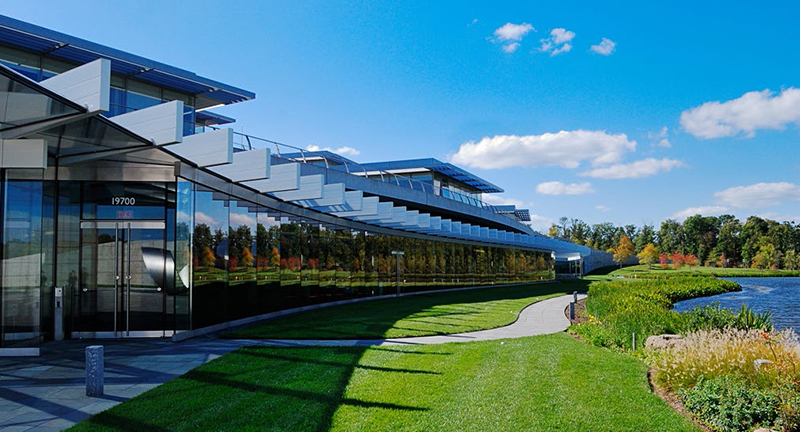 The recent past has been just as brilliant for Loudoun County. It has led the Commonwealth of Virginia in job growth for the last four years, Rizer reports. And it has led the nation in highest median household income over that time as well. In addition, taxes for Loudoun County residents have actually decreased 21 percent over the last decade. That’s because Loudoun County has grown its commercial tax base from 19 percent to almost 40 percent of its overall tax base. This was accomplished through the recruitment and expansion of businesses.

“We approach it almost like a private organization, a sales organization, and we’re full service in what we do,” Rizer explains. “We do everything, literally, from site selection to process assistance and fast track ombudsman work, to marketing, to research. I mean, we just want to be able to add value to every deal as we go forward. And then the county’s really been able to grow up around business as opposed to being so dependent on just the federal government or just residential taxes.”

Infrastructure updates have been important because in just a few decades the county’s population has swelled from about 125,000 to nearly 415,000.

Despite that growth, about two-thirds of the county remains relatively rural. In fact, Jackie and John F. Kennedy built a sprawling, horse-country estate just outside of Middleburg on the southern edge of Loudoun County. “It has been an amazing opportunity to be able to preserve a lot of the charm of western Loudoun’s farm country and horse country and we still have these seven beautiful small towns that are just jewels for this entire region,” Rizer says. “So, we’ve been able to preserve almost all of that through our success of the eastern part of the county and it’s taken a lot of pressure off of having to build more houses throughout the western part.”

This has been one of the best years for housing sales Loudoun County has seen. Homes are sometimes sold within hours of being listed. Unfortunately, there aren’t a lot of smaller units in the county, but there’s potential for those kinds of developments to be built around stops on the new Metrorail line.

“We’re excited about continuing to build a different kind of housing product,” Rizer reports. “That’s important for the young workforce that our technology businesses are going to be dependent on.”

Loudoun County is known across the world as data center alley. More than 10,000 of the county’s employees work in, or around, the data center industry. When it comes to facilities, the county has more than 20 million square feet of data centers, with another four million under development. Those businesses will net the county more than $350 million in local tax revenue this year.

Loudoun County has an incentive program to attract businesses, but that program hasn’t been used to attract data centers. “We have not incentivized data centers locally at all, not one dollar,” Rizer reflects. “There is a great state incentive that is a sales tax incentive, so data centers don’t have to pay sales tax on the equipment they buy if they meet certain qualifications. But really, that’s the only incentives we’ve ever given to data centers. We haven’t incentivized them locally at all.” The county’s business incentive program is based on a return on investment. Whatever incentive is given to a company must be paid back within three years through tax revenue. Only about two percent of the deals in the last decade have involved any sort of county-level incentive.

Loudoun County has not been immune to the effects of the pandemic, but the way county leaders responded to the crisis speaks to its ability to adapt. The unemployment rate was below two percent prior to the pandemic; within a month, it had increased to more than 10 percent. “So, when we recognized that our businesses were going to be impacted by the coronavirus, we launched an entire fleet of programs to try to help them,” Rizer explains. “The first was just creating a resource page so that they could get the latest information on what were the requirements and what federal programs were available, and how should they deal with their employees.”

The next step was outreach. More than 3,500 businesses were contacted in a two-month period. The feedback informed the formation of new projects. For instance, farmers in rural parts of the county wondered what they would do with food they were growing since restaurants were closed. And if people couldn’t leave their houses because of a stay-at-home order, they wouldn’t be visiting farmers markets to buy food, either. The solution was a virtual marketplace. Farmers could put their information on there for free.

When unemployment spiked, a virtual jobs board specific to Loudoun County was set up. Loudoun Economic Development, Visit Loudoun, and the Loudoun Chamber of Commerce partnered to create the Take Loudoun Home and Loudoun is Ready programs. More than 1000 businesses have engaged with the programs as a way to promote what they’re doing in response to the pandemic. For example, restaurants share special hours set aside for those who might be at higher risk of complications from COVID-19 or have put special procedures in place to accommodate a safe reopening.

The county also leveraged its own incentive funding, along with federal Coronavirus Aid, Relief, and Economic Security Act funding, to give away grants totaling in excess of $11 million for more than 1,700 businesses. “I’d heard, just yesterday, that those grant programs have helped businesses stay open for another two, three months,” Rizer reports. “So that’s very rewarding for us, as well.”

Virginia is the ideal choice to support the continued growth of cloud- and technology-focused companies with its strategic location in the Mid-Atlantic, close proximity to Washington, D.C., and access to major international airports. Virginia is also home to the world’s largest data center market. Dominion Energy currently provides 1,700 megawatts of peak electric demand to this market. This demand will continue to grow significantly thanks to robust state and local incentives, extensive electric and fiber infrastructure, and a strong technology workforce.

Clean, reliable power from Dominion Energy is among the most affordable in the nation. The low cost of power coupled with site selection assistance and the company’s focus on time-to-market provides immediate value to new projects. Dominion Energy is not just an electric utility, but also a partner to get businesses up and running as quickly as possible.

Collaboration with state and local government has been instrumental in supporting new and existing customers as they decide to locate in Virginia and continue to expand. Partnerships and long-term planning with localities such as Loudoun County provide a foundation for economic growth and infrastructure improvements throughout the Dominion Energy service area.

The City of Swift Current: Where Life...