The Chesapeake Regional Airport is a general aviation and reliever airport located in the city of Chesapeake, Virginia and serving the Hampton Roads area, including Norfolk, Portsmouth, and Virginia Beach. The airport is 12 miles south of the central business district of Norfolk, and covers an area of 430 acres. The facility, which is owned and operated by the Chesapeake Airport Authority, opened in 1978, as replacement for a nearby grass strip that was slated to be repurposed into a business center. “This was the most logical area,” says Airport Manager, Chris Schrantz. “It had been used as a paper pulp farm by Weyerhaeuser, so it eliminated the displacing of the general population because it was already a business in the area. It actually suited the Airport well.”

With 81 tie-down locations and 88 T-hangars, the Airport is home to a wide variety of private pilots, and currently, there are 115 GA aircraft based at Chesapeake, with a waiting list that’s about 20 deep. The Airport also has four corporate hangars with room for more. “Right now, we have targeted an area on the Airport for two corporate hangars; each one is slated to be a 12,000-sq.-ft hangar with a 1,600-sq.-ft. lean-to attached and parking,” Schrantz reports. “The Authority has taken the position that they would prefer to own those two hangars and then lease the space out, as needed, either to itinerant customers, or if there’s somebody who wants to lease the whole thing and enter into a long-term lease, they would do that. We’re working on a bond issue, right now, to fund it.”

Schrantz relates that the Airport is almost self-sufficient, although, currently, it receives some operational funds from the City of Chesapeake to cover wages for three full-time staff and a summer hire, stormwater fees, and various miscellaneous expenses. With its FAA funding, the Airport is planning on taxiway and runway rehabilitation sometime in the next several years. “We’re running at about 20 years on the current surfaces, so it’s getting to be time,” Schrantz notes. “The runway, right now, is in good shape. The last pavement study that was done identified the runway as very good.”

Regarding any competition from its closest GA airport neighbor, Schrantz believes that Chesapeake offers several advantages: its runway is a bit longer, and can be extended, if necessary. “They have 5,350 feet, we have 5,500 feet,” he avers. “Also, we can expand out to the northeast, whereas the other airport, right now, is at its ultimate end state; they cannot physically grow any larger. So, we have the opportunity to go to an ultimate end state of 7,500 feet, if the need ever arose. Another thing that makes us competitive is that we have a robust security system; we’ve got proximity card entry with a digital log-in and tracking system, along with closed-circuit television and high definition cameras that record 24/7. Also, we’ve got a capable approach and ILS (Instrument Landing System) to Runway 5; we also have an LPV (Localizer Performance with Vertical Guidance) to Runway 23, so we’re covered as far as approaches go, which means we can bring some well-equipped airplanes in low IFR instrument flight rules.” (IFR means a ceiling less than 1,000 feet AGL ((Above Ground Level)) and/or visibility less than three miles. Low IFR ((LIFR)) is a sub-category of IFR.)

Regarding the nearest commercial airport, Norfolk International, Schrantz says that Chesapeake is just as close to that city, in terms of driving time, especially since Norfolk just completed its Dominion Boulevard Bridge project. “So, it’s a freeway-grade highway all the way into downtown Norfolk,” he notes. “You can be there in 16 or 17 minutes, so that’s a big time savings. If you were to land at Norfolk International, the traffic to get from that airport to downtown is a little bit of a challenge. Also, we don’t have landing fees.”

Going forward, Schrantz sees the Airport as a business-friendly partner in that part of the state. “Chesapeake is growing and forward thinking,” he states. “It’s looking towards the future and trying to get up-and-coming technology corporations to base here. There is an area to the west of us that’s been identified for light industrial by the City, which would be a nice attractor for some corporate folks. Our personality is definitely business-friendly. I try to instill an attitude of being an extended family, as opposed to just being clients and tenants that pay rent. We’re the closest airport to the epicenter for business for Chesapeake and the Greenbriar area, and I think that this Airport is a great alternative to some of the commercial options because of its location and because the tax structure is much more attractive in Chesapeake than some other localities.”

When it comes to providing services for businesses, as well as private pilots, Chesapeake Regional Airport definitely has the right approach.

Check out this handpicked feature on The Columbus Airport – Exceeding expectations.

WHAT: A general aviation and reliever airport

WHERE: South of the central business district of Norfolk, Virginia

The Riverport Railroad – Waiting to get... 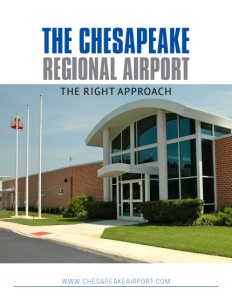