A city on the move

Business View Magazine profiles New Haven, Connecticut , a city of 130,000, In south central Connecticut on the northern shore of the Long Island Sound.

New Haven, Connecticut was founded by English Puritans in 1638, and served as the co-capital of the state from 1701 to 1873, when sole governance was transferred to the more centrally located city of Hartford. Today, New Haven, Connecticut is home to approximately 130,000 people, and is considered the social and economic center of south central Connecticut. It is also known as the cultural capital of the state for its wide range of theaters, museums, and music venues. Greater New Haven is home to seven colleges and universities, chief of which is Yale University, among the city’s biggest taxpayers and employers. In addition to higher education, the city’s other economic drivers include life sciences, advanced manufacturing, and information technology.

Toni Harp is the current mayor of New Haven, Connecticut. A strong booster of the city, Mayor Harp believes that New Haven is “really moving forward. We led the state out of the Recession, and we have, what I would consider, the ‘secret sauce’ to help our region grow,” she says, proudly. One of the city’s recent, major initiatives was a comprehensive building and rehabilitation program for all of its schools. “We have completed 43 of our 48 schools,” she states. “They’ve either had major rehabilitation or new schools built. That’s a $1.7 billion program. We have about three or four more schools that we intend to do and are just waiting for approval from our local legislative branch in order to move the next ones forward. We’re really very proud of our schools and the new infrastructure that they represent. We think it’s been transformative in terms of jobs as well as an inspiration to the young people who attend our bright, new schools.”

Another infrastructure project that has helped New Haven, Connecticut move forward is the redevelopment of the Route 34 Corridor. Between 1966 and 1970, the State of Connecticut acquired 26 acres of land to build the Route 34 connection between downtown New Haven and communities in the region’s valley areas. “That connection was never made,” says Harp. “So, we just had all of this empty land that was owned by the state. About ten years ago, the land was transferred t the city, which has been in the process of doing major rebuilding and reconnecting the downtown area to the Hill neighborhood. We call that the Hill to Downtown project.” That redevelopment project envisions a dramatic transformation of the area, which today is a mix of older buildings and empty lots, into a district that contains new homes, workplaces, research and medical facilities, shopping, and entertainment.

Another major project on the New Haven, Connecticut’s list is the Farmington Canal Trail. Harp says that the city is working with the state to complete its portion of the 84-mile rail to trail project which runs from Northampton, Massachusetts to New Haven. “We’re getting ready to extend that all the way from Cheshire, which is about 20 miles from here. You’ll be able to bike or walk from Cheshire all the way down to the Port of New Haven. We’re doing the final leg within the next 18 months,” she says.

Harp adds that the Port – the busiest deep water port in the state – is also scheduled for an overhaul. “In terms of tonnage it’s ranked 49 in the nation for domestic trade,” she explains. “About 5.8 million short tons go through New Haven Harbor and the Port every year. In terms of foreign trade, we’re number 53 with 2.6 million short tons moving through our Port each year. It’s a privately-owned port with a portion owned by the city, but we do have a Port Authority that we participate in and we work with them and the federal government. We’re working on a plan, now, to get more dredging done there so that it can be even more active than it currently is.”

Giovanni Zinn is New Haven, Connecticut’s City Engineer, responsible for the city’s infrastructure. “Infrastructure is important to the city; it’s really the fabric on which the city is built,” he says. “In New Haven, we pride ourselves on having an infrastructure that makes is not just a good place to work, but also a good place to live – infrastructure that creates a nice web of neighborhoods. We have great sidewalks; we have an expanding bike network. We’re in the process of designing and building Connecticut’s first protected, two-way cycle track that will help all of the neighborhoods west of downtown be able to commute in -not only with a car, but by bicycle and sidewalk.”

Redevelopment of New Haven, Connecticut’s downtown is also an important initiative, and Zinn says that about a billion dollars or more of investment funds will be spent there in the coming years. The city is also planning to take out a highway that was built in the 1960s that cut off the downtown from the waterfront. “We’re taking that highway out,” he says. “We’re trying to create a neighborhood there.” In addition, he reports that there are four train lines that will soon terminate in New Haven – commuter lines that go north to Hartford and Springfield, Mass., to the New York City area, and to communities to the east. “We’re working hard to connect that to downtown, and we really think our infrastructure positions us for that,” he adds.

Zinn explains that New Haven, Connecticut is also investing heavily in sustainability and, as a coastal community, is preparing itself for the challenges posed by global climate change and rising sea levels. “To that end, we’re looking at a couple of things,” he says. “One is green infrastructure. Instead of conveying all of your water through a system of pipes to the nearest body of water, you infiltrate into the ground. That helps recharge ground water. It also eliminates the need to put in always larger and larger pipes because you’re dealing with storm water exactly where it happens. It also provides streetscape improvements.”

Mike Carter is New Haven, Connecticut’s Chief Administrative Officer. He talks about the city’s concentration on public safety. “In our public safety cluster, we have police, fire, communications, emergency management, and public works,” he begins. “Over the past two years, we have been able to put 125+ firefighters through the training academy. We’ve had the first promotion for lieutenants and captains in the fire service in the past 14 years. One of the mayor’s goals on employment is to hire more New Haven residents, so one of the focuses of the next fire entry class is to focus on New Haven residents coming into the fire department. Also, we have purchased new fire apparatus for the fire department, and we’re looking at purchasing four paramedic units as well as full staffing of the Fire Marshal’s office which has not been fully staffed in over five years.

“Crime has fallen drastically since 2011 – homicides, shootings, and shots fired. The average decline over the past five years has been around 70 percent. We are expanding our shot finding technology, so in a matter of seconds we can locate a shot, the type of gun and bullet, and the alert will go to police officers nearest to the shooting, so we can better manage those types of situations.
“Under the leadership of Mayor Harp, a working group was formed to review snow operations. Collectively a strategic, effective snow operation plan was developed and implemented. The “New” plan addressed issues focusing on secondary roads, (narrows, dead-ends, cul-de-sacs), often serviced at the tail end of a snow event. Mayor Harp procured nine new snow plow trucks to compliment an aging fleet. This addition allowed DPW to re-organize the operational program resulting in the creation of additional “narrow” routes which serviced the additional 100 +/- secondary roads.”
Daryl Jones is the city’s Comptroller, responsible for its budget and fiscal performance. “We’ve done a lot of structural changes within the city to improve its efficiency,” he says, “one, being switching to all new software. For instance the City moved from GroupWise/Novell (email system) to Microsoft Office 365 with VOIP which is the first city in the state to do so. We did that to save money and to provide better services to our residents. Financially, the city has taken the approach of balancing its budget over the last two years. We’re expected to balance our budget, this year, as well. We’ve built up a surplus. Currently, we have no internal deficits. In the span of the last twelve months, we’ve increased our bond rating from all three rating agencies, which has improved our financial condition in comparison to other cities in the state, and the state, itself.

“We have firehouse software which helps manage overtime, schedules, and reporting for the fire department.” According to Carter, the new technology improvements have helped save the city millions of dollars in the department’s overtime pay. “We also are close in finishing a fleet maintenance program which allows us to track all the maintenance work done on vehicles,” Jones continues. “We’re also adding GPS on the vehicles so we can track them around the city as a way of providing safety, and managing and notifying the operators when maintenance is needed.

“With the police department, we created a System Data Management System (SDMS) that allows us to analyze all the data on one single platform so we can better manage police operations in terms of overtime, police deployment, and knowing where the crime is all across the city. The SDMS will be expanded to pull all our systems from around the city into one platform where we can analyze, produce data sets, solve problems, and find correlations between things that are going on in the city. And finally, by the end of this fall, we’ll have a new website that will be presented to the citizens.”

Finally, Zinn talks about upgrades to New Haven, Connecticut’s historic Green, the city’s central square that was part of its original nine-square settlement, and which today serves as a central gathering place for concerts and events. “As we’re looking at how the Green can be a space for New Haven in the 21st century, we had to make sure to keep its historical character while being able to support the modern amenities and festivals that really bring the Green alive,” he says. “We’ve already changed out all the lighting on the Green with new, energy-efficient LED lighting. We’re adding utilities under it – electrical connections, fiber data, Wi-Fi, water and sewer hookups. We’re also adding the necessary backstage amenities that are necessary for festivals and concerts.”
“It’s an interesting challenge to take such a historic and very traditional space in the center of town and make it able to quickly support festivals and concerts and things that attract thousands of people from the region to our downtown, and be able to go back, very quickly, to being a historic area. So, over the next two years, we’ll have finished up all the renovations and we think we’ll make the barrier of entry for large festivals and concerts that much smaller, so that we can have a lot more of them and really program the Green solid during all of the fair weather months.”
New Haven, Connecticut might be one of America’s oldest cities. But under the Harp administration, it certainly possesses the “secret sauce” that makes it a true 21st century town on the move.

WHERE: : In south central Connecticut on the northern shore of the Long Island Sound 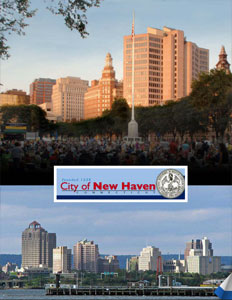