Located just minutes north of Calgary in the Calgary-Edmonton corridor, the City of Airdrie, Alberta is ideally positioned for growth. In fact, it’s been listed as one of the fastest growing communities in Canada for the last 10 years. Entrepreneurial spirit abounds, with almost two-thirds of businesses classed as self-employed. Airdrie’s population of 68,090 is comprised of a young demographic with an average age around 32 years, and almost 1,500 of its residents run home-based businesses. 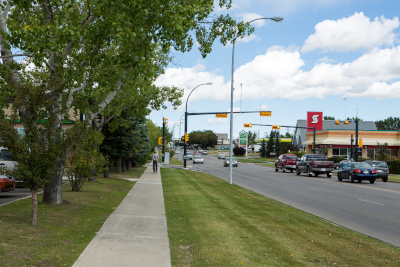 With a regional market of almost 1.5 million people, Airdrie is an important hub for industrial, commercial, and service operations with close ties to the Calgary region marketplace. More than 90,000 vehicles pass by daily, via the QEII highway, and the Calgary International Airport is a mere 15 minutes away.

Kent Rupert, Team Leader of Airdrie Economic Development, notes, “Over the last few years, we’ve seen a real uptake on transportation and logistics, manufacturing, and professional services. Those are three of the key economic drivers we’ve been focusing on.” Major employers include: Propak (an oil and gas manufacturing company), Alta Injection Molding, and TransCanada Turbine, as well as important service industries, such as the Rocky View Schools Division, Fortis Alberta, and Condillo Foods (a division of Old Dutch).

“Most of Airdrie’s employment areas are focused into four industrial areas,” explains Rupert. “The original East Lake industrial park was developed by the City in the 1980s. Then, in 2004, we annexed land and brought on three other industrial parks that are now almost at capacity, though there remains development opportunities within. To accommodate our future employment and population growth, we annexed over 12,000 acres in 2012. Within that annexation area are six quarter sections (960 acres) identified as strictly industrial lands. We’re currently doing a community area structure plan for that area, known as ‘East Points,’ to lay out the framework for the development of that industrial park area.”

For Airdrie, preparing for the next major employment area is all part of looking at the bigger picture for growth, something that Community Growth Manager, Stephen Utz, notes the City has made a priority over the last few years. “On June 18, Council adopted the 12,000 Acres Plan, a high-level land use concept for the full 12,640 acres. The draft plan, done in consultation and collaboration with landowners in those annexed acres, identifies about 60 percent of the lands for residential, 30 percent for industrial, and 10 percent for commercial. That will help meet council’s stated objective of a 25 percent non-residential and a 75 percent residential tax base.

Sustainability is clearly top of mind for Airdrie as it develops, as all proposals are run through several filters, including the AirdrieONE Sustainability Plan, which was adopted at the time of the annexation in 2012, placing a priority on green spaces. In 2013, Airdrie followed up on the Sustainability Plan by adopting an Ecological Inventory and Environmental Best Practices document to identify the most prominent ecological locations in the city. The 12,000 Acres Plan has incorporated that information into areas that are likely to be preserved as environmentally significant and protected from development as Airdrie grows over the next 50 years.

According to Utz, “Our AirdrieONE Sustainability Plan is a triple-bottom-line plan that looks at social, economic, and environmental sustainability. In addition to the Ecological and Environmental Best Practices document, we’ve undertaken other sustainable initiatives directed by the AirdrieONE plan, including an urban agricultural program. We developed an urban orchard in 2013; the last two years we’ve begun work on a backyard hen pilot project; and most recently a pilot for urban beekeeping on a limited amount of public land, and private lands next year.” 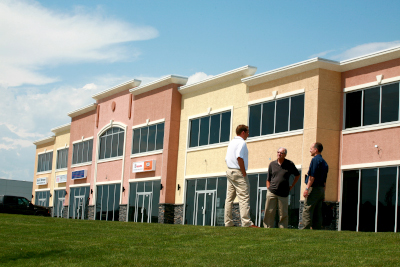 Rupert adds, “We have a few residential lakes within the community and about 140 km of linear pathways, so every neighbourhood has pathways and, in theory, there’s nowhere you can’t go on our paths. We also have an area called ‘The Canals’ – a bit of a lake community that goes from the north end of Airdrie to the south. It’s a retention pond concept that provides a great public amenity. In addition, we have 1,300 acres of maintained parkland. In our city plan, we have a policy requiring 10 acres of open space per 1,000 residents. When you include our municipal reserve park space, our environmental reserve park space, and other public spaces, we are right at that ratio.”

Airdrie’s downtown plan – originally done in 1999 and updated in 2008 – includes about 200 acres for the core area. Utz recalls, “In January and March 2017, we did a public visioning exercise for what our downtown could be. We asked people to point out what they understand to be ‘downtown’ to them. They identified approximately 50 acres of development around Main Street as the core. So, Council has authorized us to do a new downtown plan and we’ll be keeping those visioning results in mind as we move forward.”

Close to 70 percent of the city’s housing inventory are single family homes, though multi-family units have increased in the last five years – as a result of increased supply and demand. “Airdrie was traditionally a community where you moved out to buy a big house on a big lot to raise your family,” says Rupert. “Certainly our prices are a bit cheaper than Calgary, but we’re starting to catch up on the variety being offered as well. I also think it reflects on lifestyle – Millennials don’t necessarily want the big house with the yard. We’re starting to see empty nesters and the senior population increase – Grandma and Grandpa moving to the city. So, I would say we have a fairly balanced housing option for residents.”

As part of its effort to facilitate that range of housing choice, the City adopted a new Land Use Bylaw in 2016 that included provisions to allow secondary suites (such as basement suites), as well as supportive housing and freehold townhouses throughout the city. Also, stemming from the Sustainability Plan, Airdrie City Council adopted a Waterworks Bylaw with conservation measures, including requirements for low-flow fixtures in all new developments and subtle incentives for drought resistant landscaping via the new Land Use Bylaw.

Even in the downturned economy, Airdrie is having substantial population growth. Two years ago, the growth rate was 5.32 percent; last year, 4.92 percent, and there is strong continuing growth of about eight or nine people per day. Development is booming in the communities of Bayside, Windsong, South Windsong, Kings Heights, and Ravenswood. And plans were recently adopted for three new communities: Cobblestone Creek and Chinook Gate in the southwest, and Lanark Lake in the southeast. The latter will be Airdrie’s first recreational lake community, replete with a man-made lake and a total of three quarter sections of development devoted exclusively towards that community and recreational lake.

To satisfy the city’s sports enthusiasts, Genesis Place, the main recreation facility, houses six types of pools, an indoor track, two indoor fields, two hockey arenas, plus an indoor gymnasium. Airdrie also has a number of soccer fields, baseball diamonds, and skate parks. And another recreation facility is planned within the next five years.

On the infrastructure front, Airdrie gets its water from the City of Calgary and sends the sewage back, so they’re continuously upgrading those lines to accommodate population growth. The two cities have an excellent working relationship and just signed a new 20-year servicing contract. “We’re also investing in service upgrades and the planning work to support the downtown,” says Utz. “We’re always widening roads and increasing our infrastructure. Capital budget investments include a new transit maintenance facility. We have two systems: our internal transit system moves people around the community and we also have the Intercity Express (ICE) service that takes employees into Calgary and parts of Rocky View and back. One is a local transport system, the other a regional. Federal Green Trip funding has helped us continue to expand both those services.” 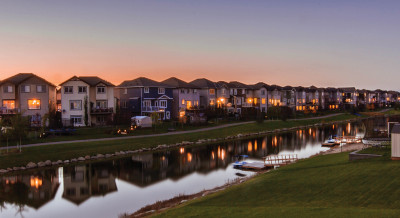 Airdrie City Council just adopted a 10-year economic strategy framework for the entire city. Rupert says it’s based on three foundation pieces: “The place to be; that we’re right for business; and we’re a connected community. We’ve hosted many provincial games and national and international events, but we’re looking at how we can leverage that through tourism. We also have the Airdrie Pro Rodeo in it’s 50th year this year, and the Airdrie Festival of Lights that runs 30 days through December and is completely volunteer driven. This spring we had our first Children’s Festival. Because of our young population, we are seeing more events coming into the community and we’ll be focusing on that.

“Our economic strategy is built around place-making; recognizing the fact that people will choose a place to live and then figure out what they want to do; whether it’s starting a small business or working for someone else. We want to focus on our location next to Calgary, while making sure Airdrie contains that small town feel and entrepreneurial energy that people are looking for.”

WHAT: City in Western Canada, population 65,000

WHERE: Just north of Calgary, Alberta

Shane Communities specializes in land acquisition and development. Our first development, Midtown in Airdrie, is well underway! This gorgeous development covers 90 acres in the heart of Airdrie. With stunning community design such as a central pond and a beautiful curving promenade, Midtown’s architecture and features delight the eye. Midtown has set high expectations for future developments by Shane Communities as its perfect combination of urban living and village charm is appealing to the current home buyer market. 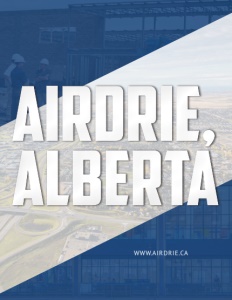