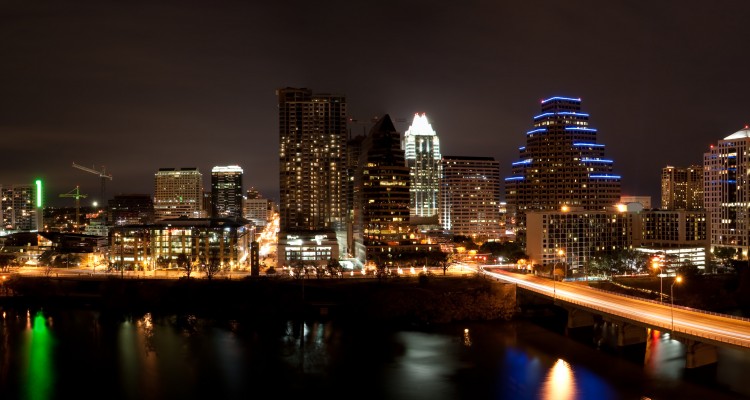 Laying the groundwork for long-term prosperity.

There is a popular consensus these days about Austin, Texas as a leader in creating jobs, fostering businesses and nurturing a high quality of life. Perhaps that’s why we welcome more than 110 new people to the region every day. In the first eight months of 2014 alone, there were 41 company relocations to Austin that created 4,730 jobs and 39 Austin businesses that expanded operations – creating 2,303 jobs – including athenahealth, Box, Charles Schwab, Websense and many others.

More than solely an impressive economic engine, in recent years Austin has developed a progressive platform around building a world-class workforce through talent development initiatives, improving local schools, new technical certification programs and increasing direct-to-college enrollment which have created one of the most educated workforces in the country, with 41 percent of adults holding at least a bachelor’s degree, compared with 29 percent nationally. These programs are driven by the business community and run by the Austin Chamber of Commerce to make Austin a magnet for the best and brightest people in the world, people who want to bring their passion, ideas and plans here to grow.
There is also a proud legacy in Austin of fostering homegrown businesses – from technology giant Dell to fast-growing innovator in the spirits industry Deep Eddy Vodka. Austin achieved early success in the 1980s and 1990s as an outpost for manufacturing operations, notably IBM, Texas Instruments, Motorola and Advanced Micro Devices. From there, Austin set forth on a committed basis to build upon its high-tech company cluster. 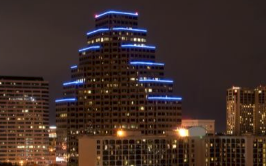 The early 2000s brought challenging economic times, but offered an opportunity for reinvention and agility, two characteristics Austin is quite proud to have in spades. The chamber’s sustained efforts in prior years to promote Austin as a hub of technology innovation and research provided a strong foundation from which to work. To bolster those efforts, in 2004 the chamber conceived and launched Opportunity Austin (OA), a five-county economic development initiative aimed at fostering job-creating investment in Central Texas.

Initially, the goal of OA was to create 72,000 jobs and increase regional payroll by $2.9 billion from 2004-2008. OA far exceeded those benchmarks, creating 120,600 jobs and increasing regional payroll by $5.5 billion in that initial five-year span. Since its founding, there have been 347 relocations to Austin that created 234,200 jobs, adding significantly to the early success OA achieved.

OA continues to be a catalyst advancing Austin into an internationally recognized hotbed of innovation and economic growth. The startup culture and business environment in Austin is welcoming and collaborative, knowing that “a rising tide lifts all ships.” The region is now more desirable than ever to startups, corporations, job seekers and investors. The Austin region received more than $360 million in venture capital investment in the first half of 2014 and is home to 30 incubators, accelerators co-working and maker spaces.

True to its successful beginnings, Austin’s advanced manufacturing industry has remained a stronghold of its economy. Fueled by Austin’s young, highly trained workforce and partnerships between the region’s higher education institutions and the private sector, Austin is a leader in semiconductor and electronics design and manufacturing.

Many of the top computer and microchip firms have established major design and production centers in Austin. Austin is home to Samsung’s largest semiconductor production center outside of Korea, to which a new R&D center was recently added. Singapore-based contract electronics manufacturer Flextronics is expanding its footprint in Central Texas as well.

Central Texas is home to industry-leading wind turbine and photovoltaic manufacturers, and supports clean energy research and development, biofuels and energy storage. It’s also home to The University of Texas Clean Energy Incubator, a clean energy start-up resource provider; as well as the revolutionary Pecan Street Research Institute, known as the largest smart grid demonstration project in the world and founded as a partnership between the city of Austin, Austin Chamber of Commerce, Austin Energy, Environmental Defense Fund and the University of Texas at Austin to beta-test new smart grid technologies.
Austin’s expanding health care system and growing cluster of innovative life sciences companies are changing the face of healthcare in Austin and the world. Austin’s best-in-class research facilities, highly educated population and dynamic, creative and entrepreneurial environment is fueled by the availability of funding, research collaboration, clinical trials and skilled talent.

Austin’s life sciences cluster has evolved into a well-rounded representation of the industry as a whole. More than 210 life sciences companies in the region are focused on the highest growth segments and research areas in the industry, including the specialties of biologics, medical devices, diagnostics, pharmaceutical, contract research and others.

The Dell Medical School at the 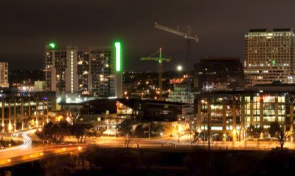 University of Texas at Austin, projected to open in 2016, will transform the local economy dramatically and will also improve healthcare in Travis County and throughout the country by training new physicians, providing treatment in a new teaching hospital and conducting research to expand knowledge of medicine and medical technology. A $50 million gift from the Livestrong Foundation to establish the Livestrong Cancer Institutes will drive revolutionary advancements in patient-centered care.

Austin is home to events like Austin City Limits and SXSW Music, Film and Interactive– so it’s no surprise that the region has become a premier destination for creative and digital media technology. More than 47,000 people throughout the Austin metro are employed in game, software and mobile application development as well as music and film technology, education technology, advertising, social media and digital content production.

Austin’s creative culture is fed by its diversity, focus on education, pro-business stance and unsurpassed quality of life. Professionals come to Austin for world-renowned computer science programs, as well as for degrees in film, design and new media at The University of Texas at Austin, Texas State University, Austin Community College and St. Edward’s University.

Continued opportunities remain for Austin to position the region for future evolution and success, allowing the region to further emerge as an international business leader, attract the best and brightest and spur additional investment in the area. 2013 brought huge advances toward this goal with the launch of Austin’s first direct, nonstop flight to London Heathrow from British Airways.

Sustained prosperity for Austin is dependent upon continued economic and community development efforts. Like any other city, Austin is not immune to the trials of continued growth, including regional mobility and water challenges continued cultivation of workforce development, removing barriers to financial aid for higher education, among others. The Austin chamber is a consistent presence in an environment of evolving policy priorities, persistently tackling these problems and working with current and future government leadership to promote a long-term, business-friendly environment.

Central Texas will continue to band together and be forceful advocates for additional prosperity in the region, and the Austin Chamber of Commerce’s team of professionals is constantly monitoring and evaluating opportunities for growth across business, workforce, innovation and policy that will enhance Austin’s bright future.

WHO: Austin Chamber of Commerce
WHERE: Austin, TX
WEBSITE: www.austinchamber.com 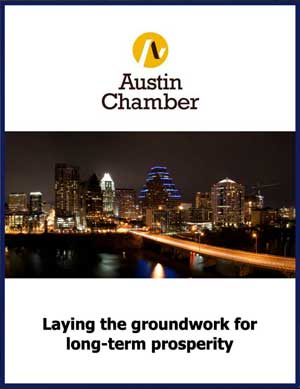