Family work ethic has resulted in four decades of business for Venus Group.

Raj Patel has come a long way… in every sense of the phrase.

The native of India arrived in the United States in the late 1960s with his brother, Kirit, and the pair quickly began to seek out ways in which they could find a practical use for a combined scholastic background in science and engineering.

Federal legislation at the time allowed non-U.S. natives to secure green cards by making a $10,000 investment within specified geographic areas, but an initial venture on a full-service car wash came up empty – prompting the brothers to shift their attention to, of all things, towels.

Now, more than 40 years later, that timely change of focus is still paying dividends.
“We never knew anything about towels,” Patel said. “So we called some import/exporters in India and brought in some towels, and that’s how we started the business. We started to find more diversified customers to sell the towels to, and then kept adding items to that.”

Manufacturing table linens was initially considered several years later when the company entered into a distributorship agreement with Milliken & Co., then rented additional space and invested in appropriate machinery. The operation began humbly, with the brothers’ wives sewing fabric during the day, before the brothers came in at night to cut and fold the prepared materials. 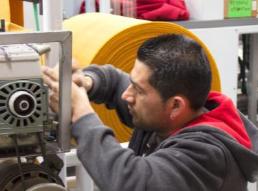 The purchase of automated processing equipment allowed the business – now known as the Venus Group – to become one of the few in the U.S. with domestic capabilities, as opposed to those who have that work done in Mexico or El Salvador before bringing finished products back.

Fabric shipped from Milliken’s plant in South Carolina each Friday arrives at the Venus Group’s 170,000 square-foot facility in Foothill Ranch, Calif. – about 50 miles south of Los Angeles – via truckload every Monday. Some is stocked as inventory in the company warehouse, while the rest is processed as needed and sent to customers within a handful of days.

“We were always taught that automation is the key, and that has really paid off because our cost is probably better than even Mexico right now,” Patel said. “We always felt that in order to give service to customers, you had to make the product in the U.S. In our industry, people want service. If an order goes out today, they want it today. They don’t want it after a few days. So that is really helping us.”

The workforce of 110 employees has been relatively stable for several years, he said, and though the company’s geographic spread is global, the majority of the products that are manufactured and processed in the U.S. are distributed across North America and into Central and South America.
Another 500 people are employed at a plant in India, which serves the Middle East, Africa, Europe, Asia-Pacific and Australia regions.

The business is split into three divisions.

Venus Institution specializes in table linens, sheets, towels, aprons, uniforms, healthcare linens and ancillary items, and sells to linen supply companies in the U.S. Venus Hospitality specializes in sheets and pillowcases, terry, bedding and table linen, and sells to major hotels (the company is a Starwood-approved global supplier). Venus Home specializes in bedding, sheets, towels and beach wares and performance textiles, and distributes its products for sales to customers on the retail level.

The Institution division is responsible for a 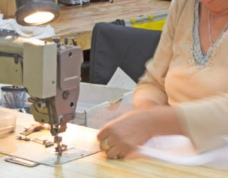 majority of the corporate revenue, Patel said, with the Hospitality division second and the Home division a distant third. Separation from competition, he said, comes from elements beyond just offering the lowest possible price.
“We try to add value to the products, we just don’t sell by price,” he said. “We are best known in the industry for deliveries and service. We promote our custom capabilities. If they want small orders or custom orders that they can turn around, we can design, double up, cut and make and deliver it faster in the U.S. I think that’s what we emphasize in our marketing campaigns.

“On our level, I’d say we may have about eight to 10 competitors.” The aforementioned Starwood status has additionally enabled Venus Group to get its products into upscale hotel brands like W and Sheraton on a global scale, and the company has also forged other impactful relationships with MGM, Caesars and the Holland America cruise line.

Plans for in-house expansion include a manufacturing plant that could ultimately be located in either North or South Carolina, which would both enhance overall market share and better enable service to customers on the East Coast, the Midwest, into South America and with cruise line partners.

A final decision on the plant, Patel said, will be made within the “next few months.”

And as for the longer term, more growth is a definite priority.

“In the next five years, we’d like to double the volume of the business we are doing right now,” Patel said. “We really want to expand back east and do better there than what we’re already doing in manufacturing out on the West Coast. We’re going to hire people there, all the management people and manufacturing people. It’s a stage in the business that we’re really looking forward to.”

The City of Swift Current: Where Life...