Wentzville, Missouri – The crossroads of the nations

The crossroads of the nations

Wentzville, Missouri was founded in 1855, and was named after Erasmus Livingston Wentz, a railroad engineer for the St Louis, Kansas City and North Missouri Railroad. The city is located in western St. Charles County, about 40 miles west of St. Louis. Calling itself the “Crossroads of the Nation,” by virtue of its intersection at I-70 and U.S. Highway 61, Wentzville is also the fastest-growing city in the State of Missouri. “We had a population in 2010 of 29,000,” says Dan Lang, Wentzville’s Director of Economic Development, “and today, that population is estimated at over 38,000.”

The mission of Lang’s Economic Development Department is to “Enhance the economic vitality of Wentzville and maintain its outstanding quality-of-place. This is accomplished through the retention and expansion of existing businesses and the attraction of new businesses to the community.” Based on the city’s burgeoning population, coupled with its thriving business environment, it’s safe to say that that mission is being carried out most effectively.

“We have a very low unemployment rate,” says Lang. “For the last year it has been, roughly, three percent or less. So we continue to have opportunities for employment, both within the City of Wentzville, as well as within the region. We are the site of the General Motors Wentzville Assembly Center, which is the city’s and the county’s major employer. There are 4,200 workers that work at the GM plant, and they run three shifts, seven days a week. They manufacture the Colorado and Canyon pick-up trucks and the full-sized vans for General Motors.”

According to Lang, there are several spinoff companies in Wentzville that take full advantage of the Assembly Center’s location. “We have a company called Knapheide that’s building a facility here,” he says. “They install racking units. It’s a roughly 55,000 square foot building, which is just about complete. They’ll take the vans from the Wentzville Assembly Center and drive them over to Knapheide. They’ll have these customized racking units installed and then they’ll drive them back to the plant where they’re loaded onto a train or tractor-trailer units and delivered to various locations.

In addition to that business, there are two others that capitalize on General Motors’ presence. “Ground Effects is a Canadian-based company, but they have a facility here that was just constructed – 30,000 square feet,” Lang continues. “They spray bedliners in pick-up trucks. They have paint booths with robotic units that spray very precisely. It adds about $500 to the vehicle to get a sprayed-in bed-liner, while the plastic units cost about $300. So, a lot of people say, ‘Well, if I’m only paying a couple of hundred more, which I’ll negotiate as part of my deal on a vehicle, I’d rather have a sprayed-in bed-liner than something else which gets put in, aftermarket.’”

The second spin-off is called the Wentzville Logistics Center. “It’s presently under construction and will be completed by the end of this year,” Lang reports. “It is a 1.1 million square foot logistics facility to support the General Motors plant. That’s a huge building – 25 acres under roof. The purpose of the building is this: General Motors has a production schedule called ‘just-in-time.’ Just-in-time means that parts are brought to the plant and within 24 hours from the time the part arrives, it’s put onto a vehicle. Now the plant, itself, is 2.4 million square feet, so you’d think there would be a lot of room to store things, but it’s all production space. So, tractor-trailer units will deliver parts to this facility and then these parts will be taken via an internal roadway system directly from the Logistics Center over to the plant to be placed onto vehicles. It’s a pretty significant event – not only for the City of Wentzville, but for the region. It will provide 400 net new jobs for the community.”

According to Lang, some of the other private investments that have occurred recently in Wentzville include a new, four-story Hampton Inn, a new B&B Movie Theatre in the Wentzville Bluffs development, a new Camping World outlet, and a $10 million outpatient healthcare facility constructed by the SSM Health of St. Louis.

Revitalizing Wentzville’s downtown is also the responsibility of the Economic Development Department, and the city has adopted a Downtown Revitalization Study which guides redevelopment in the Village Center area. “We have a railroad track that runs through the center of our community and it services the General Motors Assembly Center,” Lang explains. “It’s a fairly active line and we have negotiated with the railroad to do some landscaping improvements and beautification within the railroad right-of-way. We’ve also negotiated leases with other private companies to create public parking areas. We have a façade improvement grant program, where we work with businesses in older buildings to try and bring those buildings back to life. And so, our vacancy rate in the downtown core is relatively low – probably around 10 or 15 percent. So, we have very few vacant buildings and a pretty good mix of downtown businesses providing everything from legal and other professional type services to restaurants and other businesses that draw people to the downtown area.”

Wentzville is also breaking ground on a new City Hall – a 45,000 square foot building that will be completed by September 2017. “We operate out of an older building,” Lang says. “We’ve occupied it for over 30 years and we have departments of the city spread around the community because we don’t have enough room. So, we are building a new City Hall which will combine our departments so that we can better serve the residents of the community.”

As the population of Wentzville continues to increase – 700 single-family homes and 100 multi-family units are being built this year – Lang reflects on Wentzville’s position as the fastest-growing city in the state. “The community is growth-driven and the challenge is not to just keep up with growth, but to manage to stay ahead of growth,” he says. “And one of the ways that we do that is through the City’s Comprehensive Plan that guides the future development of the community. We use that Plan very actively in an attempt to make sure that our infrastructure stays ahead of our growth – water, sewer, roads – the things necessary in order to supply the population. And I think if you asked most people within the region, they would view Wentzville as having done that pretty well.”

One would expect nothing less from the city known as the “Crossroads of the Nation.”

CenturyLink – CenturyLink is a global communications, hosting, cloud, and IT services company enabling millions of customers to transform their businesses and their lives through innovative technology solutions. CenturyLink offers network and data systems management, Big Data analytics and IT consulting, and operates more than 55 data centers in North America, Europe and Asia. The company provides broadband, voice, video, data, and managed services over a robust 250,000-route-mile U.S. fiber network and a 300,000-route-mile international transport network. – www.centurylink.com 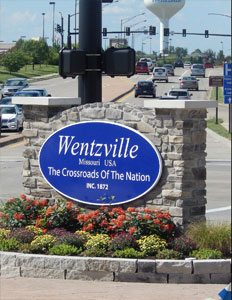