H-E-B Center at Cedar Park (formerly Cedar Park Center) is the premier multi-use entertainment facility of Central Texas, hosting more than 150 events per year, including sports, concerts, and family shows. The Center is also the home ice of the Texas Stars of the American Hockey League, the Austin Spurs of the NBA G League, and the Austin Acoustic of the Legends Football League.

H-E-B Center at Cedar Park opened in 2009 at a cost of $55 million. It holds 6,863 seats for hockey, 7,200 for basketball, and up to 8,700 for concerts and other events. The state-of-the-art arena has 24 suites (including four party suites) and 545 club seats with a private club lounge. Amenities include on-site and valet parking for all events, 15 restroom areas, six concession stands, five public bar areas, and three main entrances. The facility is owned by the City of Cedar Park, and is leased by the Dallas Stars of the National Hockey League, the parent owner of the Texas Stars. Today, the Center is run by SMG, the worldwide venue management group that specializes in managing publicly-owned facilities.

“Up until October, 2016, the Texas Stars ran the facility from an operational standpoint and they also ran the hockey team,” says General Manager, Jim Salamenta.”Then, the Dallas Stars decided to put the building operations side up for bid and SMG won. So, the Texas Stars now concentrate just on hockey, and SMG is here to maintain and run the facility and book all other events.”

Booking events is a key item on Salamenta’s agenda, and in a very competitive Austin area market, he realizes that the Center’s relationship with SMG is helpful. “I am in constant contact with SMG Entertainment in regards to booking the facility,” he says. “They provide enormous support to us, but, at the same time, I’m responsible for getting the place booked. The big thing is to drive business.”

Salamenta has been surveying the event landscape and believes that, going forward, the Center is well positioned to dramatically increase the number of its concert events, year over year, even though its competition is nearby Austin, some 20 miles to the south, which is well-known for its expansive music scene and its large number of established venues.

“When we first took over, it was, ‘How do we get people from downtown up to Cedar Park?’” he recounts. “Now, I don’t know if that’s necessary. Of course, we always want as many people as we can get to come see our shows, but the market in North Austin is growing like crazy. And there’s growth everywhere in Cedar Park. It’s a market that’s hungry for entertainment, that has the income, and is growing by the minute. Recently, we’ve seen a big increase in ticket sales – our last eight to ten shows have been very successful. It’s still tough to get shows, but I’m extremely optimistic about the future. There are new businesses going up all the time and new businesses mean new people moving here and that will impact us in a positive way. It’s just inevitable.”

Salamenta is happy to note that the H-E-B Center at Cedar Park, being only nine years old, has suffered no “major mechanical issues,” although there have been some recent upgrades. “We’ve purchased a curtain system to do smaller theater type shows,” he explains, “and we’ve added some staging so we can do bigger shows without having to rent a stage. We have put in all new fault protection for light safety – that was pretty important to us. 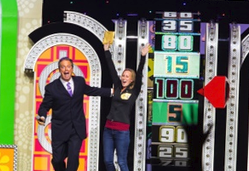 “We have done some significant upgrades in our Wi-Fi system; it’s still a work in progress. It’s difficult in such a big, open space because there are a lot of things communicating with one another. But, we’re working through that, now. It’s vital and people expect it. If your Wi-Fi’s not humming in the building, we’re going to get complaints at guest services. Moving forward, we’re looking at new and improved LED lighting for the concourse; a new security system; and we want to enhance our theater configuration with some more drapery – whatever we can do to get competitive with all the facilities in Austin.”

Salamenta understands that being competitive sometimes means just being different, and so, he believes that the Center’s entertainment niche will continue to be the more distinctive and creative offerings. “It’s the unique stuff that really works here,” he states. “We just finished up a run of Cirque du Soleil – it was a grand slam. We sold out ‘The Price is Right’ in two days. It’s about getting creative with shows, like the big NOLA event coming up in April.” NOLA is the Texas Food & Music Festival that takes place on the front lawn of the Center. It features funk, brass, zydeco, Cajun, and blues music and a variety of New Orleans style food – jambalaya, alligator, and boiled crawfish. “We’ve got a lot of outdoor space – which is also unique – to be able to do festivals and outdoor events,” Salamenta adds.

Finally, Salamenta reports that H-E-B Center at Cedar Park, as well as the Texas Stars Hockey Club, are both committed to having a positive relationship with the central Texas community: “During the 2016-2017 season, the Texas Stars donated more than $100,000 through grants and in-kind donations to hundreds of deserving nonprofit organizations.  The Stars hosted two military appreciation weekends and were able to donate more than 4,000 tickets to military personnel and their families.

“Also, each season Texas Stars players visit local elementary schools and teach the Science of Hockey to fifth grade students. Other player visits include trips to local hospitals such as Cedar Park Regional Medical Center and Dell Children’s Hospital. Recently, the Texas Stars have been working closely with Austin Habitat for Humanity, where players build small playhouses to be donated to local foster care and adoption agencies.

“The Center opens its doors to host youth hockey leagues and camps throughout the season and serves as the premier graduation ceremony for Leander Independent School District. Additionally, H-E-B Center works hand in hand with its on-site catering company RS3 (Ryan Sanders Sports Services) to donate excess food from events to nonprofits such as Hill Country Community Ministries food pantry and Rolling Hills Community Church food pantry. Often, the Center will donate tickets for concerts and performances to local nonprofits so everyone in the community can enjoy the show.

“This venue and the teams that play here are fortunate to call central Texas home. The organizations understand the dynamic relationship they have with the community and are happy to contribute and be a part of the neighborhood.”

Check out this handpicked feature on Baytown, Texas – Strong and stable.

WHO: H-E-B Center at Cedar Park

WHAT: A multi-use entertainment venue 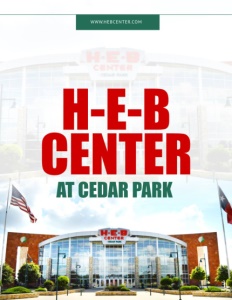