James Bonner, Vice President of the New York & Atlantic Railway (NYA), puts it succinctly: “We’re an economic driver,” he says. “We’re a huge, huge factor in the economy of New York City and Long Island.” Bonner is talking about the metropolitan region’s freight railroad company that was created in 1997, when the Long Island Railroad (LIRR) decided to de-link its freight operations from its passenger system – the densest in the nation – and put them into the hands of a private operator.

“At that time,” says Paul Victor, NYA’s President, “it was created to provide freight service to the customer base in the New York City and Long Island area, along the physical routes of the Long Island Railroad network. The goal was to permit some focus on the freight operation in its own right.” According to Victor, even though the two systems shared yards, tracks, and engines, they were really two separate businesses with different sets of clients and different operating mandates. “The similarity ends with the gauge,” he quips.

Victor expounds on the railway’s genesis and how it interfaces with its progenitor – the LIRR: “The concession, or the transfer agreement of the operation, was granted to the entity that became the New York & Atlantic Railway Company,” Victor says. (The company is a subsidiary of the Anacostia Rail Holdings Company, which owns and manages six U.S. railroads operating in seven states.) “And in a parallel transaction, the railroad needed locomotives,” he continues. “At that time, it made sense to lease locomotives that were performing the same services to the Long Island. So, for the bulk of the operations of the company, the primary source of power has been locomotives on long-term lease by the New York & Atlantic from the Long Island Railroad Company.”

Victor goes on to describe the Long Island Railroad’s network and how the New York & Atlantic Railway fits in: “In terms of the tracks – whose are they and what do we work under – the Long Island Railroad has about 350 route miles of operation. Track miles are significantly more because you have some stretches of three and four track mainline, plus yards, and everything else.

“The complete network comes in various parts,” he says. “Right now, in the City of New York, we have approximately 25 route miles of track that is freight-only. And that means there’s no scheduled passenger service on it. The trackage and the access are owned by the Long Island Railroad, but within that portion of the network, we have the custodial responsibility for the track. So, that’s one portion.

“The other extreme of the Long Island’s network is where there are no freight trains – you’ll see no freight trains in Harold Interlocking, and no freight trains in Penn Station, and on certain branches, where there’s no freight business, you will only see passenger trains. Those particular segments of the Long Island Railroad are passenger-only as opposed to freight-only.
“The largest part of the network – the third classification – is where you have both freight and passenger operations. And in all cases, passenger operations are dominant and the freight operations are a ‘rounding error.’ The Long Island Railroad handles over 300,000 passengers a day, so our entire operation is rounding error, relative to that volume of passenger/commuter activity. On that segment, the custodial control rests with the Long Island and we pay toll fees as our locomotives and cars go over that portion of the network. And for us, that portion of the network that we currently utilize is roughly about 90 miles.

According to Victor, in terms of the type of freight traffic it handles, the New York & Atlantic Railway is “reflective of what one would associate with New York City and Long Island,” he says. “We consume goods. So what comes in are things that people consume – products ranging from flour, to rice, to beer; construction products, ranging from aggregate, to sand, to re-bar, to brick, lumber, drywall, and so forth. And, if you add all of that up, that’s about 50 percent of our traffic. And then there’s a small percentage of some propane and bio-diesel.

“The outbound side of the business is what New York City produces, which is largely some kind of recyclable product or waste stream of one kind or another. We carry things to the consumer and from the consumer. And from the consumer is going to be steel scrap and other recyclables, including glass. The construction and demolition business is huge and to build a new building, generally you have to take something down, or when you remodel it, you have to take something out. And these are inorganic waste streams that are generated from construction activity. We also handle MSW (Municipal Solid Waste) generated by the City of New York.”

The NYA employs about 50 people and has two main freight yards. In Fresh Pond, Queens, its inbound freight carriers interchange with the two Class 1 railroads, CSX and the Canadian Pacific, as well as a regional carrier, the Providence & Worcester. In Bay Ridge, Brooklyn, the New York & Atlantic Railway connects with the Norfolk Southern, which gets its freight from an intermediate terminal railroad, the New York/New Jersey Rail. The New York & Atlantic Railway has various other yards, sidings, and transload facilities along its routes. Victor says he is also eyeing a ten-acre site in Long Island City, Queens, almost adjacent to the entrance of the Mid-Town Tunnel. “That’s a rather attractive property,” he says. “And looking forward, we believe it’s going to be a very attractive location for future transload opportunities.”

In many cases, railroads find themselves competing with the trucking industry for clients. The New York & Atlantic Railway has competition, but it is not mainly from that traditional competitor. “There’s competition in several ways, in several guises, if you will,” says Victor. “For certain commodities, the competition in this area is deep water. Commodities from foreign origin are going to come in by water rather than rail. So, water is generally a negative factor for us, because we really don’t serve ports – we serve near the port, but not quite there. So, that’s a huge competitive factor.”
Another factor that works against railroads in New York City and Long Island are the area’s lofty property values. “The real estate here is high. And that might make certain commodities that need lots of space to be stored, more attracted to a place many miles from New York,” Victor explains. “Transcontinentally, you go by rail, then find a nice empty field somewhere in Eastern Pennsylvania. You do two thousand miles by rail and the last hundred by truck. Then you don’t have to have the expense of transloading it or handling it in New York City or Long Island. So, we have indirect competition because you have surrounding areas, further out, where it might be more advantageous – not because of rail rates, as such, but in terms of investment in property and everything else.”

Today, the New York & Atlantic Railway moves approximately 30,000 carloads of freight a year, up from 9,200, when it began its operations in 1997. According to Bonner, the company markets itself aggressively. Its current goal is to increase its inbound food shipments. “Nobody eats more food than New Yorkers,” he declares, “and a lot of the foods that they do eat are dense.” (Dense and heavy foodstuffs are typical freight train payloads.) “That could be tomato sauce, flour, cheeses,” Bonner continues. “So, we’re targeting that very heavily. It’s a safe play and it’s one that can bring benefits to New Yorkers. That’s what we want to talk about in five years – that we’ve grown our food business by ‘X’ percent. We want to maintain and continue to improve on the other lanes that we have, but the food is a specific target for us.”

Victor believes that the NYA also helps New York’s economy, not the least, because it is a job multiplier. “The kinds of activities that we support are warehousing and local truck delivery,” he says. Bonner adds that the company helps mitigate an enormous amount of road traffic coming into and out of the Metropolitan area. “We are an environmentally-sound mode of transportation. And we’re a good employer,” he adds. “We provide good jobs at more than the average wage.”

Privatizing its freight operations and turning them over to the New York & Atlantic, has proven to have been a wise decision of the Long Island Railroad, which is a publicly-owned rail agency, administered by New York State’s Metropolitan Transportation Authority. In the first 18 years of its 20-year concession, the NYA has offered improved service, timelier connections, and more competitive rates for its commercial customers, while helping to reduce highway congestion and pollution in the greater metropolitan area. It has been a win-win for both railroads, as well as for citified New Yorkers and their suburban, Long Island neighbors.

Check out this handpicked feature on Pharmapacks.

WHO: The New York & Atlantic Railway

WHAT: short line railroad providing freight service over the tracks of the Long Island Railroad 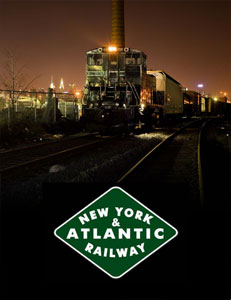