Matt Laricy, founder of the Matt Laricy Group, a division of Americorp Real Estate, in Chicago, Illinois, has had a few pretty good years. “In 2017, we finished with $139 million in sales; in 2018, we finished with $162 million in sales,” he reports. “So, it was a 20 percent growth year over year. To date, this year, we’re already up 30 percent. To top that off, we’ve been able to do it with less people than we had last year. So, we’re actually a smaller team – very efficient, very hardworking, and able to crush it. And once again, we finished as the Number Four agent in the state. So, we’re outperforming people with less people and no big national backing behind us. So, it’s pretty impressive. For this first quarter, this year, we’re Number Two in the state. So, we’re one away from the top and the only independent company in the top 20.”

Solely a residential real estate company, the Laricy Group works the Windy City’s downtown neighborhoods: River North, Streetville, Gold Coast, Old Town, New East Side, West Loop, South Loop, Lincoln Park, West Town, Wicker Park/Bucktown, Lakeview, Logan Square, and The Loop. “It’s not big parcels of land, but there are a lot of people in those parcels,” Laricy states. “Our clients are anybody that buys, sells, or invests in the downtown markets.”

Laricy, who has been named one of the top 30 agents under 30 in the country by the National Association of Realtors, as well as making REAL Trend’s list of the top 1,000 agents, nationwide, is a third-generation realtor. “My grandfather was in real estate; my father started the company; and I always knew, as a little kid, that I would get into real estate,” he recounts. “When I graduated college in 2006, I was already licensed and started selling in South Chicago. I realized that the Southside market was not what I wanted to do, so I took the company downtown in 2008, which was one of the worst housing economies that America had ever seen. I don’t have any money; I’m 23 years old; we don’t have an office in the third largest city in the country, so it may not have been the best idea. But, where there’s a will, there’s a way. I hustled and built the group to where it is today, and we’ve been growing rapidly ever since. We grew so much, that in 2013, I started the Matt Laricy Group. I got a storefront in River North, which is in the heart of the downtown Chicago market.”

While Laricy believes that springtime in Chicago is the “hottest time of the year” for buying and selling real estate, he adds that “the market is not as strong as it was in ’16, ’17, and ’18. In ’19, sales are down about four percent across the board for most people,” he avers. “We’re heading towards recession; everybody knows the economy, at some point, is going to slow down, and I think a lot of buyers know that. So, some people are second guessing a little bit; inventory is finally starting to build up a little bit, which is making the market time a little bit longer. So, naturally, we’re going to have a cooler market, which is good. You don’t go up every year – America’s built on up and downs.” 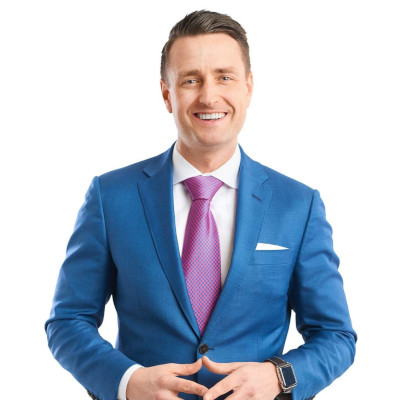 “I’m actually excited, because when the economy slows down, people are going to stop advertising as much because they have to cut costs. What I’m doing is saving my money. Instead of going out and buying things, I’ve been stockpiling it away in what I call the ‘recession account.’ So, when the market does get really soft, I’m going to double down on my advertising. People are going to get nervous about spending money, and then I’m going to double what I spend in the worst times. Like they say, ‘You don’t get rich in good markets; you get rich in bad markets.’ People are still going to be buying and selling and when they only see a few, select number of people out there, because we’re the only ones advertising, that’s what is going to put us ahead.”

Another way Laricy intends to stay ahead is by building up his share of the luxury market, while still taking care of the lower-end buyers and sellers. “I used to do a couple of million-dollar sales a month,” he states. “I’m now doing a couple of million-dollar sales every week. Last year, I did 359 transactions; this year, I’m on pace to do about 420, and I’d say a little over a hundred of them are going to be million-dollar sales, including a couple above four million. So, it’s exciting to see. I’m going to continue to build the luxury division of our group because that helps our sales numbers more, but you never want to forget where you came from. I believe you want to have a nice diverse portfolio, meaning that you want $150,000 buyers and sellers, and $10 million buyers and sellers, because if you have a diverse portfolio, no matter what the market is doing, you always have business.”

So, regardless of the economy’s ups and downs, the Matt Laricy Group should have a few more very good years, ahead.

WHO: The Matt Laricy Group

WHAT: A residential real estate firm 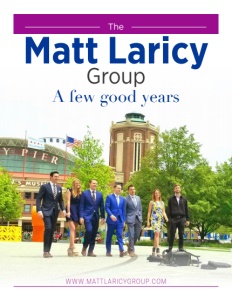