A former industrial port, the City of Hoboken, New Jersey, today enjoys pride of place with spectacular Manhattan skyline views across the Hudson River and a visionary outlook from its citizens, businesses, and local government. Following the devastating impact of Superstorm Sandy in 2012, the City was determined to create and pursue a plan of action to address climate change, sustainability, and future resiliency.

Former two-term city councillor, Ravi S. Bhalla, became Mayor of Hoboken in Nov. 2017, and brought to the office a fresh perspective and passion. Business View Magazine recently spoke with Mayor Bhalla about the goals his administration has achieved and what strategies are currently at the top of the agenda. The following is an edited transcript of that conversation.

BVM: Can you give us an overview of the city’s sustainability and climate action initiatives?

Mayor Bhalla: “The impetus for us to address the threat of climate change, coastal flooding, and a number of other environmental initiatives stem from Hurricane Irene in 2011 and Superstorm Sandy in 2012. Those were catastrophic events for Hoboken and we’ve developed a number of initiatives to make the City more resilient and sustainable for future generations; so it doesn’t have to go through a continuous cycle of destruction and rebuilding. Completing the Rebuild By Design flood risk reduction project is a major goal within the next five years. It’s a $230 million grant from the Dept. of Housing and Urban Development to the New Jersey Department of Environmental Protection that will protect Hoboken and portions of the neighboring municipalities of Weehawken and Jersey City. This project will serve as national model for how coastal communities can development comprehensive water management strategies that address complex risk. Completion is slated for 2022, and is a major priority of our administration.

“As of April 2019, we are also among the first cities in New Jersey to purchase all of our energy for municipal facilities from 100 percent renewable resources. We intend to roll out a similar program for residents. Last year, we were using only 18 percent of energy from renewable sources, such as wind and solar, and now we’ve jumped to 100 percent. It’s a substantial increase when you measure the progress. We have widespread support from the community, perhaps because it saves money. The purpose is to utilize clean energy, and we have cost savings of about 18 percent. We’re also proud to be the first LEED Gold city in New Jersey and Silver-certified by Sustainable Jersey, and we’re pursuing a Gold Star in energy, which are benchmarks for some of these initiatives.

“We recently adopted a Climate Action Plan with a goal of being carbon neutral by 2050, and a number of other components, such as introducing more renewable energy programs for homeowners utilizing wind and solar electricity. We received a grant from the State of New Jersey for integrating up to 14 electric vehicle charging stations; we’ll be rolling that out later this year. To meet the needs of people with low and moderate income, we’re creating a community solar program which would allow them to utilize solar energy from other parts of the state, if they can’t afford to install solar panels on their homes.

“We’re changing to LED lighting, which is more energy efficient, and transitioning our municipal fleet to hybrid vehicles. We’ve also imposed a ban on single-use plastic bags. In terms of transportation, we’ve adopted a pilot program for e-scooters and we already have a robust bikeshare program. In size, Hoboken is one square mile and a very walkable city. We’re trying to identify as many mobility methods as possible to avoid the necessity of using a gas-fuelled car.” 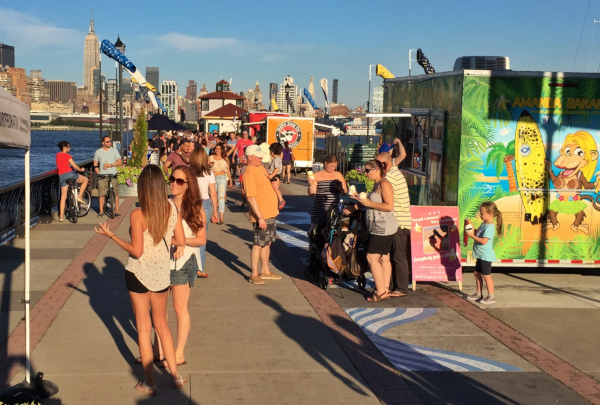 BVM: Do you have a heritage downtown you’re revitalizing?

Mayor Bhalla: “The southern half of Washington Street is generally considered our downtown. We, actually, just finished a $27 million Complete Streets program to integrate conduits for a sub-surface micro-grid under that street – in the unfortunate event of another superstorm, we are working to maintain power at critical points, such as City Hall, hospitals, fire stations, police stations, and seniors’ buildings to address public safety and critical needs of the community during a crisis. The Complete Streets model on Washington St. includes curb extensions to make it more pedestrian friendly, upgrades to traffic signals and crosswalks, and upgrading all the sub-surface water mains and service lines. That project is 99 percent complete and a major accomplishment for the city over a number of years.

“We’re in the process of creating a special downtown business improvement district to sustain and benefit local small businesses – everything from marketing and branding to streetscape improvements and it’s up to the business improvement district as to how they allocate their resources. That’s another initiative we’ve undertaken as a city to revitalize our main street. We have a diverse array of small businesses starting up in all parts of the city – from yoga studios, to coding classes, to the arts community. There are a lot of opportunities because when you compare start-up costs for opening a small business in Hoboken to the costs in New York City, right across the river, the economies of scale are more attractive here.

“We’re trying to promote an innovation economy; we just received a $100,000 grant from the New Jersey Economic Development Authority to help implement a living laboratory concept focusing on the Innovation Society. That grant is going to be undertaken with the Stevens Institute of Technology, the Hoboken Public Library and a start-up called Propelify with one of our local entrepreneurs, Aaron Price.”

BVM: Why did the city create a ‘pop-up’ park?

Mayor Bhalla: “We acquired a large, six-acre property to build Hoboken’s own Central Park. It will be our largest park and combine the dual interests of growing our open space inventory with protecting the city from chronic flooding. The park has the ability to store 1.5 million gallons of water – about 500,000 through the green infrastructure on surface, and a 1-million-gallon underground water detention tank for storing the water, so it can be treated and discharged through weather pumps. It mitigates street flooding, as well, which is a challenge of ours. We’re creating a park that has recreational and passive elements, including a great lawn, an ice-skating rink, a multi-purpose athletic field, and a lot of other features for the community to enjoy. And also we’re using the park to combat flooding.

“Because the process takes so long to complete, we wanted to utilize the space in the interim, so with about $500,000 in funding, we developed a temporary ‘pop-up park’ while we go through the design phase of the permanent park. The pop-up park includes passive elements, as well as tennis courts, basketball courts, pickle ball courts, a rock climbing structure, and the hardware is portable, meaning it can be transferred elsewhere. Once we reach the construction phase later this year, we’ll be dismantling and dispersing the pop-up park to other parts of the city, so we can use the investment we made in that temporary park in future years.” 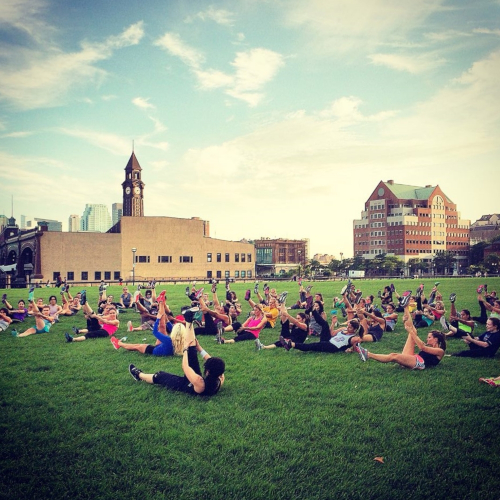 Fitness at Pier A Park

BVM: What valuable partnerships and relationships are important to Hoboken’s success?

Mayor Bhalla: “I have the best team in City Hall; consummate professionals in my administration that I inherited from my predecessor. That group, and the staff, are taking proactive measures to keep Hoboken ahead of the curve in all these important areas.”

Caleb Stratton, Chief Resiliency Officer adds: “Concord Engineering is a firm we’ve been working with since Hurricane Sandy. Going back to 2012, they act as our owner’s agent as we worked through a Dept. of Energy grant with Sandia National Labs and we’re proud to have just finished a second round of engineering funded by the NJBPU (New Jersey Board of Public Utilities) Concord’s role has been to do a baseline analysis understanding the current electrical system, and also proposing where we need to put generation or distribution infrastructure to support those critical facilities.”

BVM: Five years down the road, what are the main goals for the City of Hoboken?

Mayor Bhalla: “We want to continue to build on our infrastructure, which is critical to managing urban growth. For myself, as Mayor, completion of the northwest park, Hoboken’s own Central Park, is a major priority within five years, as well as an expansion of the southwest park which we seek to move on, quickly. We have the benefit of being on the waterfront and enjoying world-class views of Manhattan and there’s been a longstanding effort to transform the waterfront from the days when Marlon Brando’s movie On the Waterfront was filmed here, when it was largely industrial. Over the course of a century, it’s been transformed to a waterfront that’s publicly accessible and has an almost contiguous walkway that is enjoyed by the public instead of private development.

“From an energy and resiliency infrastructure aspect, building out the micro-grid is very important for the city. Also, we want to make sure we maintain and upgrade our water mains. We recently entered into an agreement with includes $33 million of investments over the next 15 years to make our water distribution infrastructure sustainable. We also formed a Vision Zero task force and we have a goal of eliminating all traffic-related injuries by 2030. It’s a very ambitious goal but we are focused on achieving it.

“Hoboken’s best attribute is our residents. In times of crisis, in times of need, there is uniqueness about Hoboken where we’re a city but we’re also a community. People know each other and we all come together with a spirit of generosity that is unmatched in any place I’ve lived around the world.”

Where:  On the Hudson River across from Manhattan, NY

the past and future of Hoboken’s water

Whether it’s Vivaldi’s strains of Four Seasons taking flight on the summer breeze at Pier A Park, or the murmurs of diners at any of the city’s 100 cafes, Hoboken is alive with sound. Indeed, the city “simply buzzes with life,” according to NJ Monthly magazine.

Running through the veins of this lively city: clean, clear drinking water. That is because Hoboken relies upon SUEZ to deliver that water. Through 40 miles of water mains, 1,100 valves, 450 hydrants and 4,500 service connections, SUEZ has helped Hoboken emerge as a city consistently voted one of the best places in the Northeast to live, work and own a business.

This partnership began more than 20 years ago in 1994, when Hoboken and SUEZ broke new ground when they entered into the first public-private partnership of its kind in the Garden State. Under the terms of this agreement, Hoboken retains ownership of the city’s water assets and sets water rates while SUEZ is responsible for the operation and maintenance of the city’s water distribution system, as well as customer service, billing and emergency services.

SUEZ has helped Hoboken in other ways, as well. In 2015, SUEZ was named the Green Business of the Year by the Hoboken Chamber of Commerce. The award is given to “the business or businessperson that in the past year lead in environmental matters be it sustainability, design/construction and/or eco-consciousness.” SUEZ also maintains a strong presence in the Hoboken community, sponsoring events such as the Hoboken Mutzfest, Saint Ann Italian Festival, the annual Arts & Music Festival and the Hoboken Public Education Foundation’s Annual Gala.

SUEZ and the City have always prioritized the safety and reliability of the residents’ drinking water. While the initial agreement was based on the state of the City’s infrastructure in 1994, both entities realized it was time to adapt and address critical issues facing the City’s infrastructure today. As a result, in 2019 SUEZ collaborated with the City of Hoboken to draft a new partnership, with the goal of creating an aggressive capital investment plan that went beyond operations and maintenance. The agreement includes $33 million in water infrastructure upgrades over 15 years and an additional $2 million investment in smart technology to monitor water consumption.