Pittsburg Tank & Tower Group (PTTG) is reaching new heights, celebrating its 100th year in business with pride and a solid commitment to grow and excel for another century. From its long-time home in Henderson, Kentucky, PTTG runs a well-balanced operation encompassing design, engineering, manufacturing, fabrication, field installation, and maintenance services for the steel tank and tower industry.

Founded in 1919, by Joseph Boyd McClelland in Pittsburg, Missouri, the company’s original focus was water tank and smokestack maintenance. It remained in the McClelland family until 1983, when Don Johnston, a seasoned pro in the tank industry with an in-depth knowledge of Pittsburg Tank and a strong rapport with the McClellands, bought the company. He merged it with his own company, Globe Industrial Contractors, moved the business to his hometown of Henderson, Kentucky, and soon added manufacturing to its portfolio. 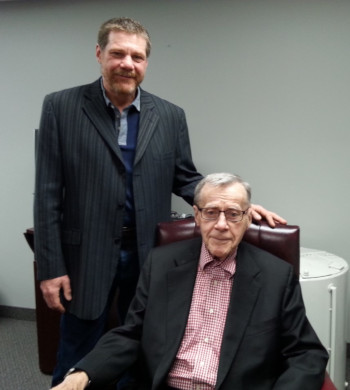 In 2003, the Johnston family started Allstate Tower, providing full service and turnkey solutions to the communications industry. Five years later, Pittsburg Tank & Tower Maintenance was created, primarily for repair and maintenance work on existing tanks and towers. In 2012, PTTG holding company was formed, uniting Pittsburg Tank &Tower Company, Allstate Tower, and Pittsburg Tank & Tower Maintenance Company. Don Johnston passed away in January 2018, at the age of 85, leaving the company legacy in good hands under the leadership of his son, Ben. One year later, Ben Johnston continued the strategic growth by purchasing Liquid Engineering Corporation, a diving inspections company based in Billings, Montana, and bringing it into the PTTG family.

Speaking about the 100th anniversary, Ben reflects, “It warms the heart. If you look at the journey of the McClelland family to forge the company from 1919 to the early ‘80s, their transition to the Johnston family was clearly one of the highlights that made us what we are today. We’ve carried on the founder’s foresight in having continued relationships and understanding the value of repeat customers because we wouldn’t be where we are today without those customers.”

In 2000, the company decided to move from its antiquated sheet metal building and build a new 110,000-sq.-ft. tank factory in Henderson. They broke ground in 2000 and moved into it in 2001. Monumental to their success, it was a fabrication plant to meet the needs of 21st century customers. Johnston recalls, “In 2009, we bought a 275,000-sq.-ft. building, about two miles from our tank factory, and moved Allstate Tower into it from a 10,000-sq.-ft. barn out in the country. It was like going from a Chevette to a Rolls Royce – seven acres under one roof and it’s full. It’s amazing. We were going to build a little 20,000-sq.-ft. facility beside our tank factory and I’m so glad we didn’t, and we ended up where we are. The tank factory complex sits on 19 acres, so we have room for expansion and that’s on the table right now. We’re looking at some issues where we really need to add to the building. That’s a problem but it’s a good problem.” 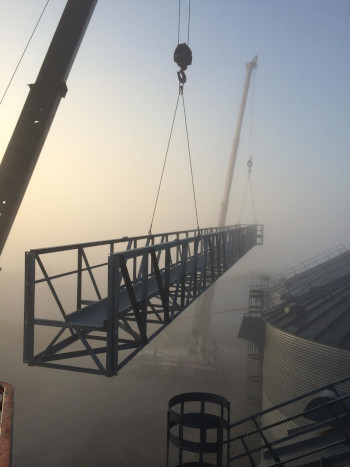 Lifting a catwalk through the fog in South America.

PTTG is the largest construction firm in the City of Henderson with about 400 employees. “A small project for us is $800 or $900 and we do a lot of those,” says Johnston. “A large one is a multi-million dollar project. Each year we’ll have several, seven-figure tank construction projects. Our average contract size is between $100,000 and $150,000 across the full gamut of all three companies. The majority of our work is in the industrial and commercial workspace. A small percentage is municipalities, i.e. a city water tank, but most of our tanks are constructed for some form of industrial usage; a power plant, a pulp and paper mill, an oil refinery, industrial gases. We do a lot of airport fuel tanks and fire protection tanks for new and expanding commercial real estate, like Walmart or Amazon distribution centers, who have their own, quite often separate, fire protection water.”

In the maintenance area, Pittsburg does some in the municipal arena and a tremendous amount in the private sector. A tank has a lining that protects the steel from whatever product is being stored in it, and at some point the lining deteriorates and has to be replaced or repaired. That means reviewing the condition of the tank every 10 to 15 years to see if it needs maintenance upgrades. Something built in the 1950s or earlier, before the Occupational Safety & Health Act was promulgated, probably has deficiencies of current OSHA regulations. That’s a fairly common maintenance service provided by PTTG.

The company also does design and engineering in all 50 states and a few Canadian provinces, including new construction, re-evaluation of structures, and seismic upgrades. The latter is becoming common practice, as more is understood about seismic activity. PTTG’s structural engineers do those analyses for seismic design upgrades. Another area of growth is the installation of cellular antennas on water tanks and putting additional antennas on communication towers. “Obviously, any time you add to either one of those, you have to analyze it to ensure it will support the additional loading,” Johnston explains. “That’s another part of the engineering we do. Depending on what code or standard a tank is built for, whether it’s AWWA (American Water Works Association) or NFPA (National Fire Protection Association) and API (American Petroleum Institute), there are different intervals in which they’re required to inspect, analyze, and collect data on their tank. We’re very active in that arena, where we’re monitoring the tanks over long periods of time through inspection criteria and documentation.”

As for competition, Johnston admits, “Ten years ago I would have said we were probably one of the most well-known construction maintenance service companies in the industry. It was incredible the amount of repeat referrals that came through the door. Then comes this crazy thing called the internet, which we all love and hate. Now, anybody that has a website and is intelligent enough to use a certain amount of search engine optimization is a competitor, whether they have the skill set, the quality, the resources, or not. That means it’s a lot more onerous on a purchasing agent now to do the due diligence. What we have to offer is a huge depth of resources and a culture of safety. Customers put a value on knowing somebody is going to do things in a safe, efficient manner and reduce the risk of a catastrophic event on a jobsite. We really pride ourselves on that. We’re not always the lowest cost company in our workspace but the value we bring customers brings in the business.”

Great long-term partnerships have driven the success of PTTG. Recently, they celebrated 26 years of doing business with Van Meter Insurance. Johnston notes, “They handle all our general liability, Workers Compensation, employee health insurance – we have an incredible relationship. Our surety company, USI out of St. Louis, is absolutely awesome; the actual bonding company is Old Republic. And Independence Bank out of Owensboro, Kentucky, we’ve been with them 28 years. Because of those kind of relationships, we have survived a good many ups and downs. It’s my philosophy that if there’s bad news, I want them to hear it from me. And they like that.”

Ben’s sons, Christopher and Levi, are both active in the business. He jokes, “One of these days they’ll tell me I’m old and kick me out, but not until it’s time. Seriously, we want to continue controlled growth in our industry, to look at acquisitions. If the right opportunity comes along, we’re prepared to take a look. To be successful for the next 100 years, we need to be extremely careful in the workspace environment and not create liabilities. We have to be smart businesspeople to navigate the times we’re in. It would be easy to sell a lot of work today, but not be able to produce it because we don’t have the employees. The number one focus for the future is to make sure we take care of our customer base.

“We have a real family environment here. We call ourselves the PTTG family and that’s who and what we are. Our safety culture, our commitment to serving our customers, and fulfilling our contracts and obligations are very important. We’re also active in the community of Henderson. A good number of our employees serve on different boards and committees in the school system, we have a large presence with the United Way, we have close ties with the Community College. We work well with the city and the county, being a good corporate member. With our 100th year anniversary, there’s been a lot of press, so the community really knows our story now, and we’re proud to share it.”

What: Manufacturer & field erector of steel towers and tanks

Independence Bank is a regional, community bank with 25 locations in 12 markets across the Commonwealth of Kentucky that possesses the size and experience to serve even the most complex clients. The Bank offers both personal and business banking, as well as, trust and investment services and agricultural service.

Pittsburg Tank & Tower Group is marking its platinum jubilee with a yearlong celebration. Monthly activities are planned involving employees, their families and, in some cases, the entire community. Pittsburg invites the public to enjoy fun, festivities, and fireworks at its big centennial celebration on Saturday, Aug. 17, 2019 in Audubon Mill Park, Henderson, Kentucky. Congratulations to all!