Innovative start-up is online leader in health and beauty

The story of Pharmapacks is a textbook case of an individual entrepreneur who began with a great idea, was smart enough to test out that idea to see if could fly, bold enough to take a huge risk when the test showed promise, industrious enough to put a business together to commoditize the idea, patient enough to push past the inevitable growing pains, and competent enough to see that idea through until it blossomed into a hugely successful start-up company that has experienced phenomenal growth in just a few short years.

Andrew Vagenas is the entrepreneur who co-founded Pharmapacks in 2010. He tells the story of the rocket-like rise of his online, e-commerce company, which although physically based in New York City, is more truly a citizen of the vast regions of cyberspace.

“Prior to the company starting,” Vagenas begins, “one of my partners and I owned a retail pharmacy. We were doing well and we had access to the distributors that we were dealing with. We had an idea to take some of the merchandise we had at the pharmacy and try to sell it online – to see what would happen. We took a chance, sold some stuff online, and we saw that there was some traction, so we decided we would try to make a company out of it. I went to friends and family and raised about $750,000. We got a warehouse, opened our facility there and got going. It took about nine months to a year to get the facility ready and get the website going. During that time, I sold my pharmacy and I put all of my focus on Pharmapaks. The first year, we had some growth, but we were not profitable; it took about two years until we started to figure out how to make money in this e-commerce industry that we were new to. We worked with two developers and started building our own technology and our own platform.”

While growing the company’s own website, Pharmapacks.com, Vagenas and his team began to experiment with the notion of going out to the marketplace to see if they could partner with other e-tail enterprises and, as he explains, “establish ground in each one.” He explains that while a lot of companies try to compete with the large established e-tail sites, such as Amazon, eBay, and Wal-Mart, in this regard, Pharmapacks was going to be decidedly different. “We don’t want to compete with them; we want to work with them,” he says. “That’s been our model. We’re not going after Amazon’s customers. We can share in the customer base.”

In fact, the company’s first partnership was with Amazon, and within only a few years Pharmapacks became one of the largest health and beauty retailers on the site. “And then,” says Vagenas, “we did the same with eBay. And we started to understand and perfect our platforms and technology for the marketplace business.”

Vagenas admits that he and his partners were venturing into unchartered territory by designing and building the actual software and platforms specifically for the marketplace sector, but he is certain that it was a necessary step to get his company to the next level. “We were new to the business, so you have to get some traction going to start getting ahead of the game,” he says. “You have to spend money on technologies and marketing and different aspects that you’re normally not knowledgeable on. We did not know anything about the industry, but through trial and error, and out of necessity, we created technology that solved every issue that we had. And that’s what we used to get us from not profitable to profitable.”

Vagenas explains that Pharmapacks’ proprietary processes include tracking customer shopping patterns, tracking items, tracking prices as they go up and down, and adding different distributors that his company can price shop from. “All of that was built into our software, and we used that and created algorithms that can basically dictate sales for us as we plug and play our entire catalogue into different marketplaces,” he says. In addition to Amazon and eBay, Pharmapacks is now the exclusive seller on Wal-Mart for health and beauty products.
Vagenas sees no downside to piggy-backing onto the most visited online, e-tail sites in the cybersphere. Armed with the company’s catalogue of products, its technology, and its warehouse managing processes, Pharmapacks is often able to beat even its hosts’ best deals. “So when you go on Wal-Mart’s site, if our price and our shipping price is as good or better than Wal-Mart’s, they’ll let us have the sale,” he says. “So when you go to buy whatever it is, if we sell that product, it will say ‘purchased and packed from Pharmapacks.com.’ Wal-Mart puts our name, prominently, on the transaction. It tells the consumer that Pharmapacks.com is the actual retailer and a trusted retailer of Wal-Mart.”

It seems that Vagenas and his partners have discovered the fastest lane of the e-commerce highway. “E-commerce is growing at a rapid rate, so as years pass, there are more and more online shoppers,” he explains. “So, it’s not that they’re looking for me, specifically; they’re just looking to shop online. But when they’re looking to shop online, I’ll be there because I’m the biggest on every platform, now. Pharmapacks.com is the largest partner of Amazon; the largest partner of Wal-Mart; the largest partner of Jet.com, the newest marketplace that launched. So, we are getting a following from each company with a different group of shoppers. Whoever is an Amazon shopper is our customer; whoever is a Wal-Mart shopper is our customer; whoever is a Jet.com, EBay, Overstock – whoever is a customer of those companies ends up being our customer.”

About a year ago, Vagenas partnered with an entrepreneur named Jonathan Webb, who had a business similar to his, was proficient in digital media and graphic design, and had access to more distributors. The combination was explosive, to say the least. In fact, Pharmapacks was recently cited in Crain’s Fast Fifty – New York Edition for its 2,967 percent growth rate, which placed it fifth on the list of fastest- growing companies of 2014. “Before we partnered up we were a $30 million company,” says Vagenas. “And now we’re a $100 million company. So, together, we use the assets that we both had and pushed the limits on what we could do.”

When it comes to limits, Vagenas doesn’t seem to notice any. The company now has over 200 employees, and is poised to gross $115 by the end of the year. It just moved into a new facility this past April, but has already outgrown it and is planning another move to another one that’s five times the size. It continues to expand its product offerings. “We started over-the-counter pharmaceuticals like what you would see in a drugstore, and we expanded to health and beauty,” he says. “And now we’re getting into make-up; we’re getting into pet supplies; we launched office supplies; household products; and we’re going to be offering fragrance. So, we are expanding our catalogue into many different categories.”

In addition, the company is poised to open several new channels in the near future, enlarging its territory throughout the online universe. “What we do on Amazon – we can do for company X. I can say, ‘We do health and beauty and I can take our entire catalogue and plug it into your website and offer your hundred thousand customers another 25,000 skus.” (A sku, or stock keeping unit, is an alphanumeric identification of a particular product that allows it to be tracked for inventory purposes.) “Companies are interested in this,” Vagenas continues. “We have about 15 contracts that we just signed and we’re going to be building out all these projects over the next years. And that will bring us to a run rate of $160 million next year, and $360 million the year after. And if we keep up the rate we’re growing, we can be at $700 million by the year 2020!”

Vagenas considers Pharmapacks a technology-driven company that took its technology and turned it into retail sales. “Anyone can buy and sell products,” he says. “But if you come and see what we actually do, it’s not as simple as that. There are a lot of sites out there that are just straight, retail e-commerce sites. What differentiates us is that we have an entire infrastructure technology that’s built and that’s what drives our sales and our growth.”

Andrew Vagenas proves that it still take ideas, intelligence, courage, industry, patience, and competence to create a thriving business. Indeed, the Pharmapacks story is a testament to that enduring principle. And any prospective entrepreneur would benefit greatly by taking a page out of this particular company’s textbook. It’s a very good read.

WHO: Pharmapacks
WHAT: An online retailer of health and beauty products
WHERE: College Point, New York
WEBSITE: www.pharmapacks.com

Sealed Air – A global leader in food safety and security, facility hygiene, and product protection, Sealed Air began in 1957, when Alfred W. Fielding and Marc Chavannes set out to create a new wall covering by laminating two plastic sheets with air bubbles in between. Although their invention never caught on as interior decor, the two men discovered their new material’s light weight and insulating properties were very useful—first as greenhouse insulation and then as the packing material we now know as Bubble Wrap. In 1960, Fielding and Chavannes founded Sealed Air Corporation with Bubble Wrap as the company’s signature brand. Today, Sealed Air is a multinational corporation with over 25,000 employees serving 175 countries. – www.sealedair.com 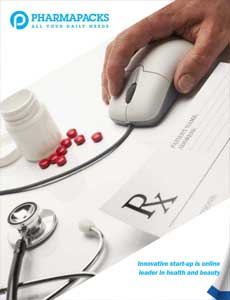