Business View Magazine interviews Greg Smith, EVP of Superior Wall Systems, as part of our focus on best practices in the construction sector.

Based in Fullerton, California, Superior Wall Systems Inc. has been a leader in metal stud framing, drywall installation & finishing, lath & plaster, exterior insulation & finish system, fireproofing, and prefabricated building components for over 40 years. “The company was formed in 1976 by Ron Hudson, who is still the current owner,” says Greg Smith, Executive Vice President. “He started it with a 1971 Chevy pickup truck and 1,500 bucks. It was a small tenant improvement and retail mall store type of a company and, over the years, it’s grown in size to the different project profiles that we currently are working on.” Today, the company serves the Multi-Family, Education, Retail, Healthcare, Hospitality, and Tenant Improvements sectors.

Superior Wall Systems is the parent company that owns Superior Panel, Superior Truss, and EZ Stud, which are located in a separate facility in Southgate, CA, about 20 miles from Fullerton. “They pre-manufacture load-bearing wall systems and load-bearing panels, so that we can go in and build the project that conventionally would have been built out of wood or even concrete, or in some cases, a conventional structural steel with I-beams and columns,” Smith explains. “We can come in with these pre-manufactured panels and start putting those in place, which is a huge schedule savings for the end user. In a lot of cases, we’re doing hotels and extended stay places, so we can get ‘heads on beds’ a lot sooner than the conventional construction practices.” 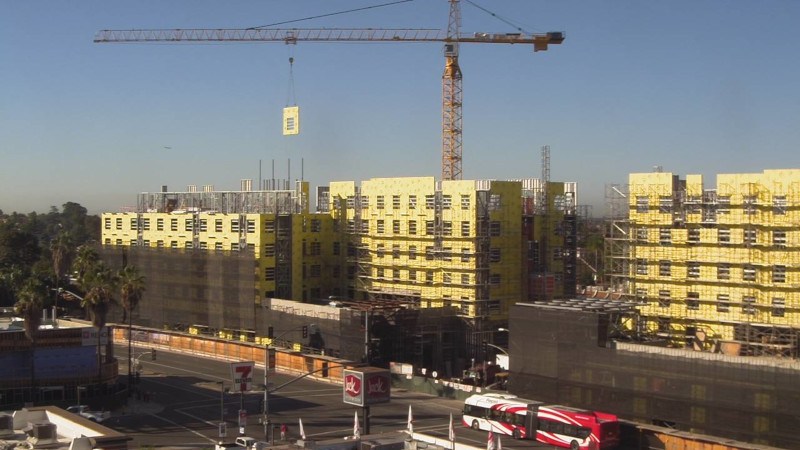 According to Smith, these load-bearing systems and pre-manufactured panels are relatively new entrants in the construction industry. “In the past, there wasn’t a sustainable market that could hold onto that construction delivery system, so companies kind of come and go with the load-bearing panel system. But now, the companies seem to be coming and there’s some sustainability in the marketplace to where we can hang onto that market share, and with the economy booming as it is, there’s more and more projects coming out of the ground that offer that opportunity.”

The Superior Panel, Truss and Stud divisions employs approximately 12 people, and Superior Wall Systems has 22 in the main office and another 450 out in the field installing the construction materials. The company’s geographic footprint includes: San Diego, Los Angeles, Riverside County, San Bernardino County, Santa Barbara, and San Luis Obispo. “We have done some work up in San Jose, San Francisco, and Reno, although we don’t do work in those more northern cities on a regular basis – some one-off stuff as a client requests us to,” Smith adds.

Smith believes that one of the company’s competitive advantages is its location and geographic footprint. “Currently, we’re the only prefabricated panel shop in Southern California,” he notes. “There are a couple of others – one is located in Phoenix, Arizona; there’s another one located in the Reno/Lake Tahoe area of Nevada; and there’s also a panel company in Tennessee and one in Texas. So to service the California area, those guys would have to palletize their stuff and get it on a truck, and when you’re trucking a panel, you’re mostly trucking air. You’ve got a lot of open air between the studs; it’s not a solid, monolithic panel. And you’re only able to get, maybe, six panels on a truck. When you’ve got a project going full bore, having to facilitate those panels and having to get them onsite where they’re probably swinging eight to ten panels a day, that’s a long distance to be driving panels to service that project. Being in Southern California, we’re probably no more than 25 miles away from where the project’s being erected, so that gives us an advantage right off the bat. 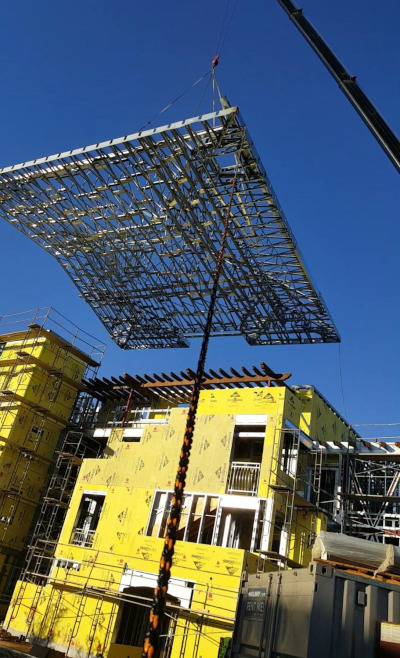 “A secondary advantage is: we’ve been in the market now for about six or seven years, while the other companies are just now getting started. The company in Arizona has been going for about three years; the company in Reno just opened up. So, they’re going to go through a lot of growing pains and they’re going to go through a natural learning curve that you get with a start-up in manufacturing. We’ve already overcome those hurdles and we have a body of work in place that we can show in our résumé of successful, completed projects.

“Another thing that we do is we have a process called Building Information Modeling (BIM). I don’t want to suggest that we’re the only ones that have that, but we’ve been using it so long in the panelized world, that we have the ability to line up all of the various other trades – mechanical, plumbing, electrical, all of the in-wall trades that are going to be involved with the project. So, we can line up with our framing members to miss, or align with, those other mechanical services in a much more efficient manner. And, because we’ve been doing this for about five or six years, we have a very good relationship with a local engineering firm here, as well. So, we have a body of work and a set of standard details already in place, and when we’re talking to a client – a developer or property owner – we can show them all of these BIM models in place, with the engineer sitting in the room with us and validating the details, and this helps us in the pursuit of these projects.

“And, finally, we’re the only company that has performed the seismic test on the shake table down at UC San Diego. (The biggest shake table in the U.S. is part of the National Science Foundation’s Natural Hazards Engineering Research Infrastructure. By reproducing earthquake seismic waves, the shake table enables researchers to test new designs for large structures made of concrete, wood, masonry, and other materials.) They shook a six-story, pre-fabricated structure that we built to a 7.0 earthquake, which equaled the North Ridge quake that we had here in 1994, and the building didn’t come down. So, they shook it again and it still didn’t come down. Then they set the second floor on fire, and after the fire was put out, they shook it again at 7.0 and it still didn’t come down. So, they finally turned the table to its maximum shake, which is a 10.0 earthquake, which has never occurred in recorded time, and it still didn’t come down. They actually paid us $50,000 to remove the building off the shake table and they never had to do that before – not with wood or any other structures. So, that’s a pretty good endorsement.”

Not only do Superior Wall Systems’ structures stand up better to environmental hazards, they help get construction projects completed more quickly and with less manpower. Smith explains: “I’ve been in this business for 33 years, and I’ve never seen an economic boom like this – particularly in Los Angeles. It’s created a shortage of manpower and, with that shortage, it’s prompting us, as an industry, to find new ways to get stuff done faster with fewer people. And the pathway to that seems to be through pre-manufactured paneling systems. In the past, we’d put scaffolding around the structure and then we would hand-frame each stud in place; we’d put the exterior sheeting on there; and then we’d start to put the plaster system over that. With the pre-manufactured system, we take these wall segments and we fly them up onto the side of the building and the building is pretty much done as we’re putting these panels in place with probably a third or a quarter of the people onsite that would normally be there. So that’s reducing the pressure that we have in trying to obtain enough people to build a building; it’s lowering our insurance costs because we have a much smaller risk with less people onsite; it’s lowering our payroll, while we’re still able to capture the same cost per square foot for the buildings; so it’s become a sustainable market for us. And being that we were the first one to the starting line gives us a significant advantage in capturing that work and seizing those opportunities as they present themselves.” 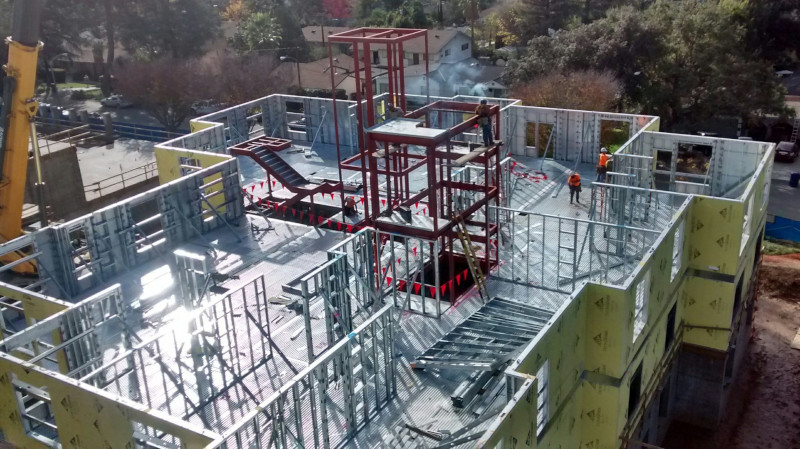 Now that the prefabricated system has become mainstream, Smith sees opportunities on the horizon. “I think all the prefabrication dialogue and the prefabrication market have stimulated people to really push the boundaries of what you can prefabricate in construction, that we really haven’t done before in the United States,” he muses. “I think it’s pretty exciting, and five years from now, we’re going to be pre-fabbing much more than we’re currently doing now. We’re probably in the Wright Brothers phase of prefabrication, right now; we’re just learning how to fly. I think there’s an unlimited amount of potential out there.

“So, the five-year plan is to perfect that prefabricated system and expand that into other methodologies that we could apply it to – not just the residential, not just the shopping malls, but exploring the possibility of doing hospital work in a prefabricated system, or high-rise buildings. I know there’s a company up in San Francisco – they’re exploring building high-rise buildings using cubes. You pre-manufacture these residential cubes on the ground, and then you just frame them all up in place, bolt them together, and you’ve got a finished building.

Meanwhile, Smith reports that Superior Wall Systems is busy building a couple of high-rise towers in Los Angeles and another one in Long Beach. Last year, the company worked on the Metropolis Phase One, a luxury condominium and hotel project in downtown L.A., for which it completed the framing, drywall, insulation, fire stopping, sheathing air barrier, and lath and plaster. The project won the Project of the Year award for high-rise residential in ENR Magazine, as well as the Walter F. Pruter Project of the Year Award from the Western Wall & Ceiling Contractor Association (WWCCA). “We were very proud of that,” says Smith. “It was one of the first residential high-rises to be built in downtown L.A.”

View Superior Wall System’s YouTube video where their system was the only one to need deconstructed after stress testing.

Check out this handpicked feature on ClearFreight, Inc. – Customer forward.

WHAT: A manufacturer of prefabricated building components

Dittemore Insulation is a leading installer of all types of commercial insulation.  For over 20 years, our skilled team of professionals has met every challenge head on and always exceeded expectations.  Thank you to Superior Wall Systems for being a key component to our success. 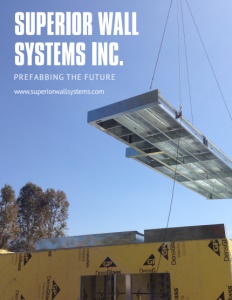