February 2019Past IssuesSupply Chain and Logistics

In the realm of international freight forwarding logistics, it’s experience, key relationships, and incorporating the best technology that rule. With over four decades of tenured, international executives and strategic coordinators running the most advanced technology available, the ClearFreight, Inc. team is a leading force in the industry. The ClearFreight technology strategy centers on a single platform that integrates global operations across all functions, services, and organizations, supporting customer needs in supply chain visibility and management.

Founded in San Francisco in 1973, ClearFreight has a long history of commitment to service excellence, training and developing the best people, and responding to the changing needs of customers. With a quickly expanding international presence, one of ClearFreight’s best assets is its culturally diverse team. The ability to speak and write many languages enables them to effectively assist clients in understanding and navigating the complex requirements of international trade.

In a recent interview with Business View Magazine, David Reynolds, Vice President of ClearFreight, Inc., discussed the company’s exceptional growth on domestic and international fronts, and some very interesting cargo they’ve handled. The following is an edited transcript of that conversation. 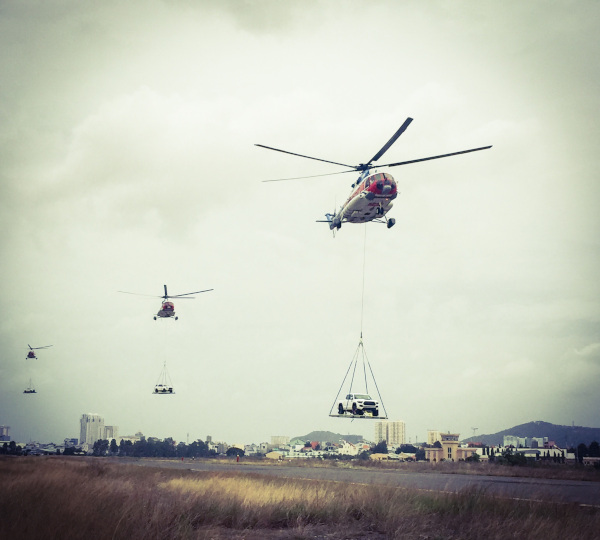 BVM: Can you share the history of ClearFreight and its evolution?

Reynolds: “Kevin Maloney founded ClearFreight in San Francisco in 1973, as a customs brokerage, and opened a second office in Los Angeles two years later. That’s now our corporate headquarters. In 1985, we launched our export division, and began offering outbound transportation services in addition to import traffic and customs brokerage. In 1992, ClearFreight became a subsidiary of Sankyo Transportation Co. Ltd., a Japanese 3PL logistics firm specializing in brokerage, freight forwarding, warehousing, and terminal operations worldwide. We added offices in Seattle in 1992, Detroit in 1996, and Chicago in 1998. To further expand our service in the U.S. and throughout Europe, we opened offices in Rotterdam in 1999, and Amsterdam and New York in 2000.

“Our Miami branch office opened in 2001 to serve shippers and consignees to and from South and Central America. In 2009, we opened Houston, Dallas, and Atlanta offices, adding more U.S. coverage. In 2014, ClearFreight acquired a Chinese firm and expanded our operations into Asia and Canada, with offices in Hong Kong, Shanghai, Beijing, Qingdao, Shenzhen, Guangzhou, Dalian, and Xiamen, and Toronto, Ontario (our first Canadian location, operating under ClearFreight Canada Inc.). In 2018, we opened our first Latin America office in Santiago, Chile. And we’re looking to open in Taiwan. So, while we’re not a multinational, we have the entire U.S. covered pretty well. Oddly enough, in 2015 we became, with all our subsidiaries, larger than the parent company. Since I started in 1988, we’ve grown from two offices and 45 employees to 28 offices and about 350 people.” 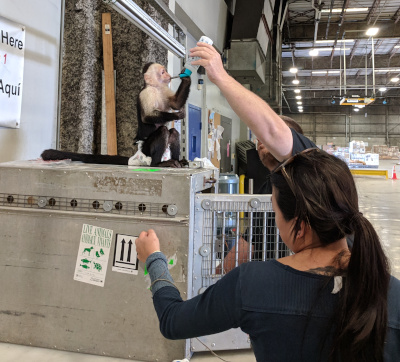 BVM: What differentiates you from the competition?

Reynolds: “The biggest difference is our experience and tenure. I just finished my 30th year and I’m the junior of our senior management. My boss has been here 38 years. The people who work for me have done so for 20 to 25 years. That’s unheard of in most companies. And it’s an important factor because it’s annoying for shippers or exporters or importers to keep educating new people at a company. Each need is very specific; you just get these people trained and, if they’re with multinationals, they leave. Then you have to start all over again.

“The other thing is our flexibility. We’re a full-service customs broker, freight forwarder, doing all international transport, all modes, dangerous goods, consulting, financing – whatever the importer or exporter needs. Interestingly, we neutrally service agents at basically every port in the world. For instance, at Sao Paolo, Brazil, we have a dozen agents feeding us business. Unlike a lot of our competition that create bigger consolidations to lower costs, agents can feel free to use our export or import services without fear of us trying to grab their business.

“And another major differentiator is we have money – a lot of money; meaning we can extend credit limits for duties up into the millions of dollars. ClearFreight can actually take on large companies with large needs because of the resources we’ve developed with our retained earnings over the years. There are lots of reasons for our success. For me, specifically, I grew up overseas in Kinshasa (Democratic Republic of Congo) and Manila (Philippines), so my understanding of how to navigate the third world for American companies is pretty good because I’ve lived it and done it.”

BVM: What type of shipments do you handle?

Reynolds: “We can do everything, everywhere. There’s always a learning curve and we’re not shy of anything. Imports are a lot of car parts, some food products, electronics and furniture, and wearing apparel. On the exports, we’ve made a very nice niche in cosmetics. We ship eyelashes by air and ocean all over the world, as well as nail polish. A lot of those goods are low-grade hazardous materials and we’re experts at it. We also specialize in all dangerous goods – including radioactive Class 7, explosives and guns. We generally don’t do perishables because you have to be 24/7. We are also brokers for big furniture and retail companies in the mid-west.

“For air export, a lot is less than container load and we do full containers, airplane charters, everything for trade shows – we shipped monkeys to Canada for a show. In air freight, we have the ability to containerize in unit load devices, which the carriers have. We do packing and crating, and I spend a good part of my day consulting, telling people what they have to do to get a product into, say, Pakistan. We’re actually bringing in cadaver corneas from France to cure the sight of people in the United States. It’s very complicated because the FDA and the USDA got involved and customs can be arbitrary. So, we have to work our way through each situation, especially when it’s a new kind of product that, on the import side, the U.S. government hasn’t seen.” 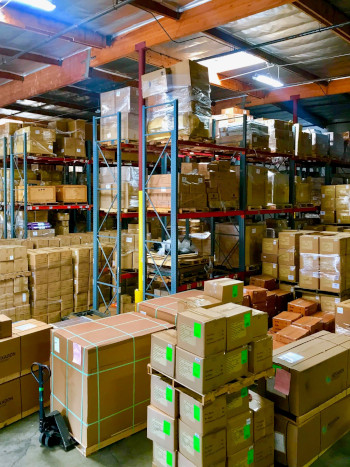 BVM: “What’s planned for the future?

Reynolds: “There are three or four things on the drawing board all the time. The Taiwanese acquisition is still in progress; the company owners want to retire and we’re taking it over. Most recently, we absorbed 10 new people in Los Angeles because the company they worked for folded and closed, so we took all of them in. It’s a constant thing, sometimes serendipitous. For example, after my house burned down in the California fires in November, I met someone at the hotel where I was staying. His aunt and uncle own a firm in Toronto that’s mostly domestic trucking. They’re older and can’t run it any more, so there’s a good chance we’ll buy that. We’re always looking for good deals from people who, for one reason or another, want to sell.

“The long-term plan is geared more toward technology. In our industry, whether it’s the three largest integrated carriers, the track and trace of containers, the flow of information by way of ease (where the customer just has to hit a button to locate their shipment) is what’s happening. The challenge is that it’s not all uniform with carriers and customs and countries. As an industry leader in information technology, ClearFreight has developed its own sophisticated transportation software, which is licensed for use by other leading companies, and we frequently provide our clients with customized applications to better serve their needs around the world.”

BVM: What other important points would you like us to know about ClearFreight?

Reynolds: “ClearFreight is divided into four industries – Air Export (20% of income), Ocean Export (20%), Import Transportation (15 to 20%), and Customs Brokerage (30 to 35%) – and we’re looking to create a fifth. That would be Domestic Transportation. We’re seeing better margins in domestic than international. Lately, because of the strong dollar, imports have been bigger, but it’s all about currency. When the dollar gets weaker, you see the exports boom.

“So, we’re in a very good position vis a vis some competitors who concentrate on an 80-20 basis, either on imports or exports. We’ve always been 50-50 and that’s insulated us from currency and different types of changes in the international environment. That’s how we survive and thrive.”

Where: Headquarters in Los Angeles, California

Founded in 2008, L&D Transport specializes in local and regional trucking solutions, including: cross-town services in the greater Detroit area; cost-effective, intermodal trucking services in Michigan, Ohio, and Indiana; and rail to truck transloading, with a storage facility capable of storing up to 200 containers. The storage options is offered to our customers as a viable option to save up to 50% on the storage fees that they would otherwise pay to the railroad yards. The company owns its own, secured and monitored 10-acre truck yard, and approximately 350 multi-axle chassis, which can be available for rental as well. Furthermore, we employ a fleet of 45 semi-trucks and own and operate the repair facility for the trucks and equipment. L&D Transport has a longstanding relationship with industry heavyweights, such as Hapag, Maersk, Clearfreight, ZIM, CMA, Evergreen etc., carrying loads on their behalf to many local businesses including but not limited to: GM, Ford, Chrysler etc. We have been able to keep and increase our customer base because of our high level of customer service and the ability to adapt to the ever-changing landscape of the transportation business. In addition, the company conducts its business with the highest ethical standards, focusing on safety, quality services, teamwork, open communication, and cooperation. L&D Transport understands its customers’ expectations and always does its best to meet them. 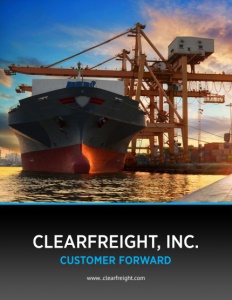