Cochrane, Alberta – How the west is now

How the west is now

Business View Magazine interviews Mayor Jeff Genung of Cochrane, Alberta, as part of our series on economic development of Canadian towns and cities.

Cochrane is a town in the Canadian province of Alberta, located some 28 kilometers northwest of the City of Calgary. It was established in 1881 as the Cochrane Ranche, became a village in 1903, and was home to 158 residents by 1906. Before World War I, Cochrane was home to a stone quarry, a sawmill, and four brick plants. Skilled artisans in the community combined their talents with local products to construct buildings of quality and individual style, giving Cochrane a unique and special character, which it retains to this day. 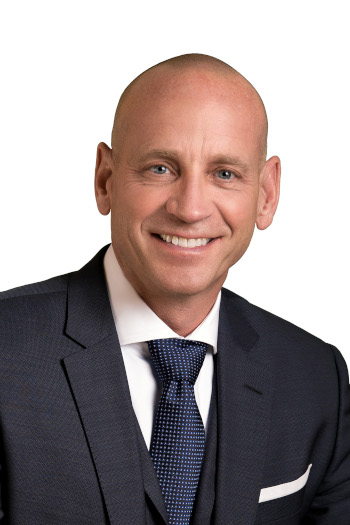 Cochrane was incorporated as a town in 1971, with a population exceeding 800. The general economic boom of the 1970s brought many new residents and a burst of construction activity. Today, Cochrane is still noted for its western heritage, unique buildings, and popular historic downtown, as well as its small-town hospitality. With the completion of the downtown revitalization and celebration of the town’s centennial in 2003, Cochrane became a popular tourist attraction and continued to see rapid growth.

While this rapid growth presents opportunities and reflects the desirability of the community, it also impacts existing infrastructure, including water and wastewater utilities, and local roadways. The Town has made a number of recent infrastructure investments.

“Together with Rocky View County, we invested nearly $48 million to build an addition on the Spray Lake Sawmills Family Sports Centre,” Genung reports. “The addition, which includes a new aquatic center and curling rink, enriched the community by creating a multi-use community gathering space.”

Within their own municipal roadways, the Town has also begun construction of a new bridge over the Bow River, to facilitate the flow of traffic from the Spray Lakes Family Sports Centre and Cochrane’s commercial district, to the south east communities of Riviera and Riversong. “The $54 million corridor and bridge is slated to be completed in the fall of 2020,” says Genung. “This new infrastructure aims to alleviate traffic congestion, as it allows residents from these southern communities to move into our core without using the highway. It will also be a secondary access for emergency responders.” 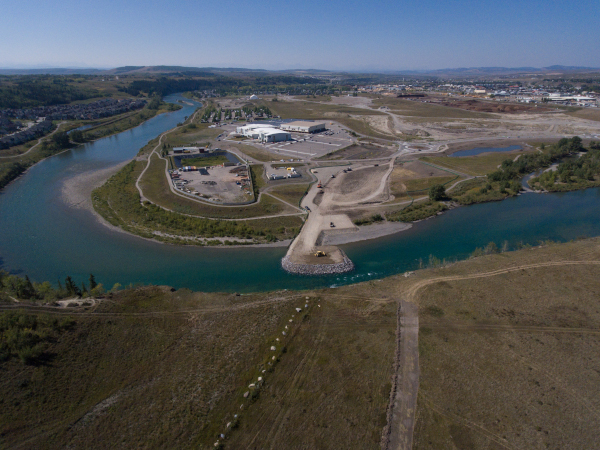 While the Town is challenged with significant growth, and continues to focus on the required infrastructure investments, maintaining and revitalizing the historic downtown remains a priority. “We are always looking to honor our history but also be a progressive community of the future,” adds Genung. “Being intersected by the railway and the Bow River provides us with an opportunity to protect our historic downtown and not fall into the trap that many communities have, where a new development would happen on the outskirts and diminish the historic downtown.”

Indeed, two new downtown developments have repurposed a pair of old industrial sites. A previous Domtar creosote treatment plant located in the community core left vacant land that was considered a contaminated brownfield. The Town worked with the provincial government to develop a community revitalization area and redirected all incremental property taxes to community amenities. Through this redevelopment, it attracted a number of new businesses to the Quarry, while protecting the historic downtown.

Furthering this central redevelopment is the recent approval of the new Greystone subdivision, which will be located in an area previously designated as a gravel pit. This centrally-located 140-acre development will include residential and mixed-use development, including commercial and light industrial opportunities, diverse home choices, a community plaza, a pond, a recreational park, walking and cycling paths connected to the river pathway system, and a commercial base to offset residential taxes.

With a median age of 37, appealing to that demographic figures significantly in the community’s agenda. “We have a lot of young families in Cochrane,” says Genung. “And one of the things I’ve heard from residents is their desire to work locally. To that end, we are focused on spurring local economic development and working with local industry to provide jobs.”

Cochrane is continuing to focus on becoming a hub for new and emerging technologies. It is already the home of Garmin Canada, the international manufacturer of GPS navigation and wearable technology to the automotive, aviation, marine, outdoor, and fitness markets. Garmin Canada’s Cochrane office employs more than 250 staff. In addition, Cochrane is also home to 4iiii Innovations, which manufactures technologies for both elite and casual athletes to improve sports performance; Hunterwood Technologies, which designs and manufactures equipment to compress forages into high density bales for the global forage export industry; and Mc-Things, maker of a measurement and control platform for the Internet of Things.

“We see this as an industry we can key in on,” Genung exclaims. “We are looking to build an innovation center in the downtown core on Town-owned property to provide a space for the incubation of new businesses. The research that we’ve done has shown that if we can get them to start here, they’re more apt to locate here in the future, thereby creating more local jobs. We would like to build a tech incubator site, coupled with a library and cultural center for the performing arts, and house that all in one building right in a downtown that’s walkable from those new developments.”

As a municipality, Cochrane has already made some significant forays into 21st century technologies and is planning even more. “We’re expanding our municipally-owned fiber network,” Genung reports. “In the past, we put in a fiber network to connect all of our town facilities. This provides us with an opportunity to look at providing it as service to the community, with an emphasis on business development. Any infrastructure work, such as new pathways or roadways, also includes the installation of conduit to allow us to pull fiber and expand it throughout the community.” 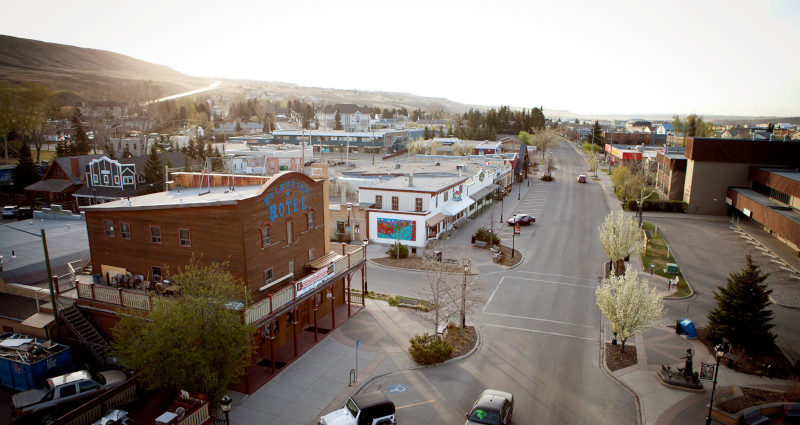 Though fiber installation, the Town aims to partner with telecommunication businesses in providing a WiFi mesh network over the community that will provide WiFi as a utility, just the same as water, sewer, and garbage pickup. The installation of fiber will also be used to support the Town’s recently approved transit system.

“We are doing things a little bit differently,” explained Genung. “The service will be the first of its kind in North America because it will be 100 percent on-demand, meaning that we’ll be combining ride hailing technology with public transit to create routes based on where people are and where they would like to go, instead of the old, traditional fixed route, where a bus would drive around in hopes of picking somebody up. It means more direct routes for riders, and buses that are not forced to travel empty from stop to stop through low-demand neighborhoods.

“The on-demand transit will be unveiled this summer, with financial support from a provincial ‘green trip’ fund. We’re accessing $6 million to help offset the capital cost. This includes the purchase of eight buses. We are looking at smaller buses that can move through local neighborhoods without being intrusive. And through the installation of fiber, we can provide a WiFi system to every bus stop. This will allow all transit users to access the Town app to hail a bus or track its location on their mobile device.”

As Cochrane endeavors to preserve its past, while simultaneously marching confidently into the future, Genung maintains that the present is still the best, and only, place to be. “Being so close to Calgary, we have all the amenities of a big city, but we still have a small-town feel,” he avers. “As the gateway to the Rocky Mountains, we have the best of both worlds. You can live in Cochrane and enjoy the mountain views, explore the river valley. If you’re a mountain biker, a hiker, or a skier, you’re 30 minutes from the mountains. But you can be at an international airport in 30 minutes. Cochrane’s got everything that anyone could ask for in a community.”

Cochrane, Alberta – it’s how the west is now.

WHERE: Northwest of Calgary 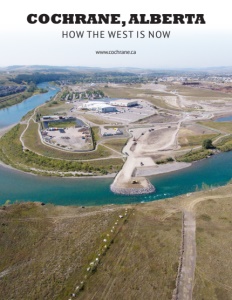