The county road to success and the bridge to the future

The official mandate states: “The County Engineers Association of Ohio (CEAO) raises the technical and non-technical standards of service rendered to the general public by the County Engineer and his or her employees by establishing a central point for reference and group discussion of mutual problems.”
That statement barely scratches the surface of the Association’s importance – to its members and the population as a whole. Fredrick B. Pausch, Executive Director of CEAO, speaks with passion about the importance of lobbying for safe travel throughout Ohio.

“I always tell people that job number one of a County Engineer is to ensure the safety of the traveling public. If a bridge or road is not passable, they’ll close it. If it needs to be load-rated, they will do that. Everyone sees these aspects. They also see Congress patching instead of fixing Federal spending bills. This is a major concern when trying to plan future construction projects. You don’t just, one day, build a bridge. You need detailed plans, environmental clearance, etc. – just like Federal legislation, it all needs to be planned and timed out.”
To put the urgency in perspective, in the state of Ohio there are currently:

• 104 county bridges closed
• 1732 county bridges posted with legal load limitations
• 5300 county bridges classified as structurally deficient or functionally obsolete
Advocating increased government funding for the state is a CEAO priority. “Ohio is part of the mid-west,” said Pausch. “If you’re shipping from Chicago to New York City or Charlotte, South Carolina, you’re going to come through Ohio. It is an enormous job to keep up with aging infrastructure. It takes more than our Association, it takes public engagement at a grassroots level to demand change from legislators. Social media networking is a driving force. Every tweet I send on Twitter, I add #FixtheTrustFund, meaning let’s come up with a long term solution; a four or six-year Federal highway spending bill.” 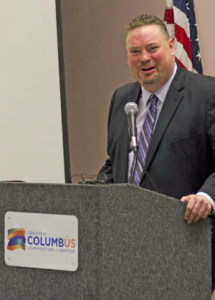 Uniquely Qualified
The CEAO traces its beginnings back to 1879, when a group of Ohio surveyors met in Columbus to discuss how to further their needs as a profession. The actual association was founded in 1940 and grew to today’s impressive membership of approximately 6,000.

All 88 Ohio counties are represented under 12 Ohio Department of Transportation (ODOT) districts on a regional-based system. Members include 88 County Engineers and their staff, as well as Supporting Members, such as contractors, engineering firms, and construction services.

A priority within CEAO is to stimulate positive dialogue between County Engineers and related industries for the mutual benefit of all. The Supporting Membership program was designed to reach out to individuals, firms, and corporations with an interest in local, county, and state transportation systems.
County Engineers in Ohio are unique compared to those in most other states, in that it is an elected position. They also require dual certification – as both a Professional Engineer (PE) and Professional Surveyor (PS). Whereas the state Board takes care of professional licensing, County Engineers are held to a higher degree by voters in the county, a major difference from other road supervisors and engineers throughout the nation.
Ohio is served by four distinct highway systems:

1. ODOT is responsible for the state highway system
2. Township Trustees oversee the township system
3. Cities/municipalities each maintain their own roads
4. The CEAO has oversight of 28,971 miles of urban and rural roads, and 26,326 county bridges, with a staff of five full-time employees, plus two consultants/lobbyists and a treasurer.
Since 1940, the Association has worked to unify its members in providing the highest quality transportation, drainage, surveying and land record keeping services. Continuing education programs and networking opportunities at conventions and regional meetings are valuable member benefits. Pausch noted, “Engineers and surveyors have many qualification courses to take each year. That’s something we offer. Or, if you’re a construction company bidding on projects, we put you in touch with the right people to cement proposals.”

Bridging the Gap
After the winter thaw, potholes are a huge issue. People don’t care if it’s a municipal road or the interstate… they pay taxes, they want it fixed. Over the last 10 years, the media has become more involved. Tragedies like the Minnesota bridge collapse come to mind. Higher taxes are never popular, but most people don’t realize that the Federal gas tax hasn’t been raised since 1993. The Ohio state gas tax hasn’t risen since 2003. That amounts to a number of years dealing with declining, aging infrastructure. Bridges and roadways don’t improve with age, neither do railways, sewers, and water systems. CEAO officials go to the Legislature several times a year to testify on the situation, then, it’s up to legislators to prioritize where the funding will go.
Pausch knows firsthand, “Being in the Snow Belt, Ohio infrastructure takes a beating from brutal winters and salt damage. That’s why we keep lobbying for more resources. But it’s not all about raising taxes. Let’s talk about the future with electric cars and hybrids. Somewhere out there we need a champion on the national level for the VMT (Vehicle Miles Traveled) tax. As it stands, fuel-efficient, electric cars aren’t being taxed at all, other than license fees.”

The overall problem for the CEAO is the sheer scope of the Ohio landscape:

In the last two years, working through the Governor’s office, the CEAO has secured $130 million for a new Ohio bridge partnership program funded by Federal dollars that will totally fund 230 new county bridges in the state. The program, one of the first of its kind in the nation, will replace some of Ohio’s worst bridges. Proof of the power of advocacy.
“All travel starts and ends on a local road.” Safe journeys, brought to you by the CEAO. 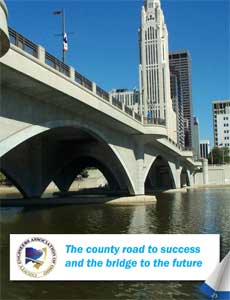