Inception was only the beginning for HH Angus & Associates.

Since opening its doors in 1919, the Toronto-based company has evolved into one of Canada’s largest private engineering firms while providing mechanical and electrical engineering consulting services to clients in sectors that include healthcare, technology, commercial and energy.

And though a track record nearing 100 years speaks pretty well for itself, the daily motivation is to remain at the forefront of design through leading-edge practices and standards, and to provide a comprehensive range of services for clients – technical support, design and project management among them – that take the relationship from concept all the way to commissioning.

The numbers indicate the success of the “in it for the long haul” approach.

More than 40 HH Angus employees have at least 20 years of service time with the company, and more than 70 percent of the firm’s overall business portfolio is comprised of repeat clients – including Cadillac Fairview, the Toronto Dominion Bank, the Royal Bank of Canada, the Art Gallery of Ontario, the Hospital for Sick Children, the University Hospital Network, St. Michael’s Hospital, Queen’s University in Kingston and the University of Toronto.

“We will celebrate 100 years in business (in 1919). You only get to that milestone through satisfied clients, a stable workforce and consistently embracing new technology and approaches to our industry,” said Kevin O’Neill, director of the company’s Commercial Division. “For example, in the firm’s early days, we were among the first to engineer electrical systems for buildings when electricity use was still new, and air conditioning was almost unheard of. 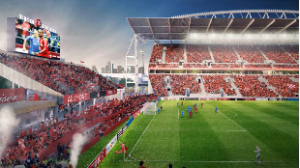 “And we were early adopters of sustainable design for buildings, long before it became more common.”

O’Neill said his division is largely geared toward any projects not under the company’s high-tech and healthcare umbrellas, or those endeavors not specifically aimed at a building’s central plant functions.

That means “any buildings that have people” are in the division’s wheelhouse, including tenant renovations, schools, universities, offices, courthouses, sporting fields and facilities and residential interests. Also falling under the commercial purview, he said, is the company’s lighting team, as well as its VT (Vertical Transportation) team – which handles aspects of projects that involve elevators.

The Healthcare Division is the company’s largest revenue producer with a 50-percent overall share, while Commercial and Technology are near equal for the No. 2 spot ahead of Industrial/Energy.

“It kind of comes and goes (in the Commercial Division),” O’Neill said. “Some years we get a lot of post-secondary education work. We’ve generally got a pretty good client base in the office sector and tenants, so we get a lot of churn work with some of our larger clients. They kind of come and go. There just doesn’t seem to be as much happening with those places as there are with office towers.

“We pick up the odd thing here and there – like the BMO Field renovation, for example – we’re just undertaking that right now and trying to get the field ready for a first soccer game in May.”

The first of two phases for the $105 million BMO Field project involves adding 8,400 seats, 12 executive suites, two party suites and a loge box to a facility that’s been home to Toronto’s Major League Soccer entry since 2007. Phase II will include the addition of a full-size canopy that covers all seats except those in the north grandstand, and the installation of a sound and lighting system.

The stadium is part of the Exhibition Place complex in the city’s downtown section and the deadlines for the phases are May 1, 2015, and May 1, 2016, respectively. The team plays its regular-season games from March through October, but will remain on the road for the first two months of the 2015 schedule while project work is being done. The first home game is scheduled for May 10.

Recent corporate real estate renovation work with another long-term client – TD Bank Group – has led to HH Angus becoming a domestic player in Integrated Project Delivery, a method in which the talents and insights of all participants are harnessed to optimize project results, increase value to the owner, reduce waste and maximize efficiency through design, fabrication and construction.

The approach has gained some 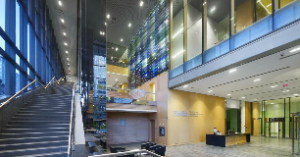 traction in the United States, but not as prevalent in Canada.

TD Bank Group has used it with both high-rise spaces and bank branches, and McMaster University has incorporated it on a recent new build project at its Hamilton, Ont. campus as well.

“You get the contractor and the consultants and everyone’s working to provide the best price that meets the project requirements,” O’Neill said. “The contracting structure is a little bit different in that you have to hit a target, and if you come in under the target there’s more profit left and then it’s split equally between the teams. If you go over then target, then it’s coming out of everyone’s pocket.

“We’re trying to promote it and propose it to owners. It’s beneficial to everyone. You get relevant input from the builder as well as the design consultants. You get everyone’s ideas at the up-front sessions and you can lay everything on the table, think outside the box and bring in all of your past experiences and what you learned. If you set a prince and come in under the price, it’s a win-win.”

Some of the company’s recent and ongoing projects also include Ericsson’s new ICT Centre in Montreal, and transit installation systems in multiple sites in Toronto. A large HH Angus unit is working on the Centre Hospitalier de l’Université de Montréal – the largest hospital in North America, covering 2½ city blocks and 334,000 square meters at a cost of better than $2 billion.

HH Angus is doing design work in Revit, a 3D-modeling graphic software, and both the size/scope of the project along with its engineering complexity have helped raise the company’s profile.

“In Toronto, and a lot of other large city centers, there’s aging infrastructure and aging mechanical and electrical infrastructure within buildings, so that’s one area we’re trying to grow,” he said. “We’re trying to take that approach and do a little bit more. We’ve just got to build the client base and go from there. Everybody’s got sustainability and energy efficiency top of mind to green existing structures, so that’s an area we want to touch on, too, and become experts in that field as well.” 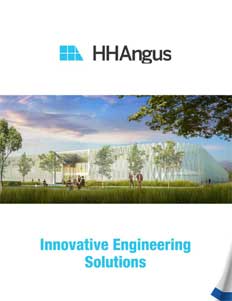